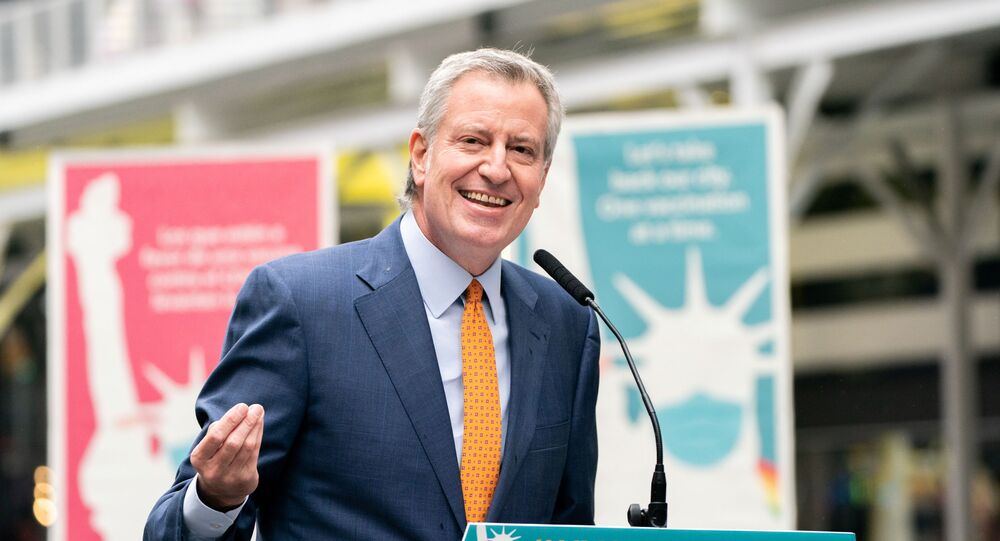 Opponents of the Democrat have long blamed him for the rising levels of violent crime, pointing to the decision to terminate the stop-and-frisk programme, which was deemed unconstitutional as well as a $1 billion budget cut for the NYPD.

Social media has become an indispensable tool for politicians, who use it to tell constituents about their campaigns or criticise their opponents. But quite often they forget that voters can respond to their posts and even the most benign statments may backfire on them. Take New York City Mayor Bill de Blasio, for example. On Saturday, the official posted a picture of himself wearing sunglasses.

"The future of New York City is so bright I gotta wear shades!", reads the caption to the post.

The future of New York City is so bright I gotta wear shades!#SummerOfNYC pic.twitter.com/CMvNBOY0Yo

​In return, he received more than 1,400 negative comments, with users harshly criticising his performance, which they deemed had affected security in the Big Apple.

Sir if lawlessness and elevated crime levels are bright ....you are correct you might even wear your shades at night your embarrassing yourself

​Others professed their "love" for the mayor, expressing hope for his upcoming departure.

Can’t wait until we don’t have to see your mug anymore.
Hope Mayor Sliwa is able to clean up your mess like Rudy did back in the 90s.

The future’s bright because you will be out of office soon.

​Still others stooped to insults and made fun of the mayor's teeth.

Man can’t run his teeth why we letting him run NYC???

​De Blasio's post came one day after three people were wounded in two separate shootings in NYC. The incidents occurred two weeks after the city was rocked by yet another shooting in broad daylight.

Violent crime has become one of the biggest problems facing the United States in general and NYC in particular. Homicides and other gun-related violence, which have jumped during the coronavirus pandemic, continue to rise. According to CNN, who cited numbers provided by the New York Police Department, shooting incidents rose 73 percent in 2021 compared to the previous year. In May alone there were roughly 150 shootings.

Critics of De Blasio have drawn attention to his decision to terminate police programmes as well as $1 billion budget cut to the NYPD. The official himself warned residents about a bloody summer in the city, saying that city authorities are doing everything they can to deal with the problem.