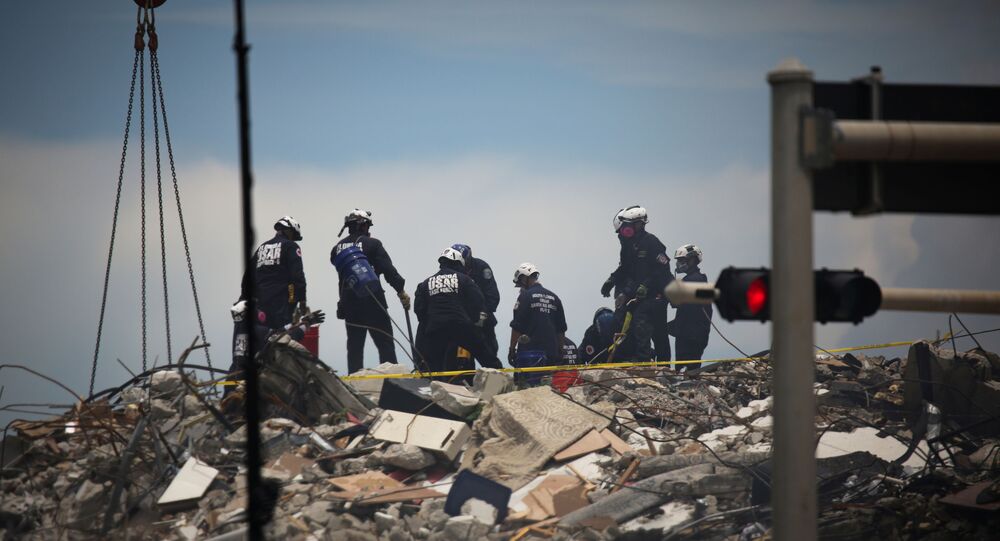 Death Toll in Surfside Building Collapse Up to 5, 156 Still Unaccounted For

WASHINGTON (Sputnik) - The death toll in the apartment building collapse in Surfside, Florida, has gone up to five, while 156 people remain unaccounted for, Miami-Dade County Mayor Daniella Levine Cava said.

"Today our search and rescue teams found another body in the rubble," Levine Cava said at a Saturday evening news conference, as quoted by WTHI-TV. "Our search has revealed some human remains," the mayor added.

"Our top priority continues to be search and rescue and saving any lives that we can," the mayor stressed.

Let me be clear: The men and women of our @MiamiDadeFire team are the best in the world. They are working around the clock and using every strategy available to find and save as many loved ones as possible.

Please keep them in your prayers. pic.twitter.com/kQJnH0G336

On Friday, Levine Cava told reporters that four people had been found dead and 159 were missing following the collapse of the condominium building.

The New York Times reported on Saturday that an engineer inspection of the Champlain Towers South condominium near Miami warned the owners of "major structural damage" and recommended repairs almost three years ago. The flaw that engineer Frank Morabito specifically pointed out in a 2018 report was that the building allowed cars to drive in next to a pool deck at the ground level with failing waterproofing, which he said was "causing major structural damage to the concrete structural slab below these areas."

On Thursday, the mayor of Surfside Charles Burkett said the building manager informed him the apartment complex was substantially full at the moment of the tragedy and the chances of finding people alive under the ruins are very low.

The family of Paraguay’s first lady — her sister, sister’s husband, their three children and an assistant — were assumed to be among six Paraguayans who are unaccounted for after the building collapse.