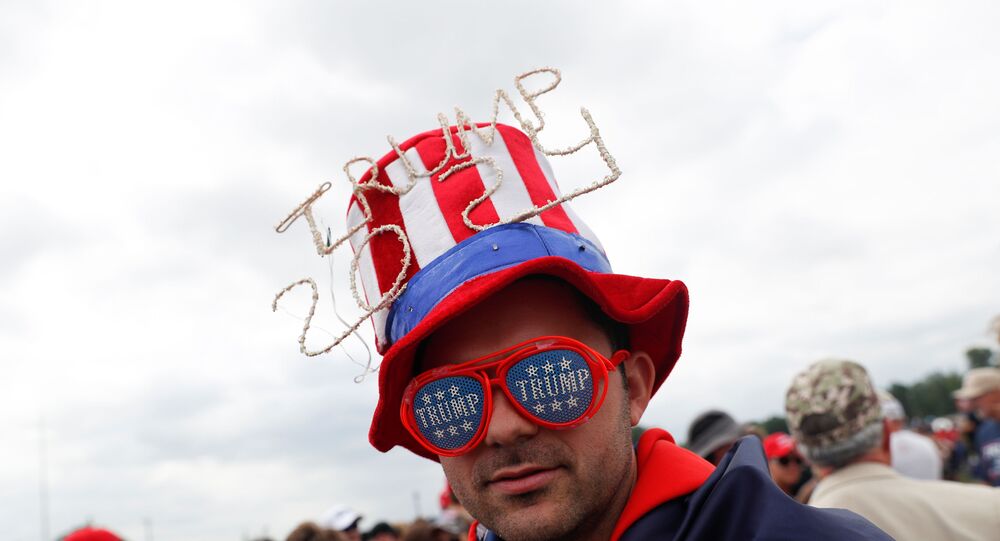 WELLINGTON (Sputnik) - Donald Trump’s loyalists easily - if for a day - multiplied the population of Wellington, Ohio, as many thousands of them flocked to the placid village for the former US president's campaign-style rally, his most formidable show of force and display of popular support since leaving the White House.

Wellington, home to fewer than 5,000 people, was advised by organisers to expect between 10,000 and 20,000 guests. Miles-long lines of cars, chock-full parking lots and crowds waiting for their turn to enter local fairgrounds, the rally venue, suggest that the turnout forecast was hardly an exaggeration.

"If I die tonight I die a happy man. This is better to me than football games I went to when I was in high school. This is better than a caravan that we joined when he was up for election. This is like... My God, if you are not here you are missing everything," Wellington dweller Drew Suchan says.

He is sitting with his entire family in front of their house and waves to a seemingly endless column of cars heading for Trump’s "Save America" rally.

"He is not even Catholic, but he should be canonized. The man has been so right... The guy is wonderful, he is America," Suchan says.

New rallies are dubbed "a revenge tour" as Trump seeks to purge turncoat Republican lawmakers by campaigning in favor of their challengers ahead of the 2022 Congress mid-term elections. In Wellington, the former President speaks in support of his ex-advisor Max Miller’s bid to unseat Anthony Gonzalez, one of ten House Republicans who voted to impeach Trump on the incitement of insurrection charge following the Capitol unrest.

So many patriots in Ohio waiting for President Trump! God bless the #USA! 🇺🇸🇺🇸🇺🇸 #TrumpRally pic.twitter.com/eycrIjFp5J

"We are tremendous Trump supporters. There will be tens of thousands people here that like Trump, that want him to be re-installed as President and re-elected in 2024. He is the leader of the world and without him the world will be worse off," Joseph Korff says as he stands in a queue to the fairgrounds - a vast plot of grassy land surrounded by multiple fences and gates.

Intentionally or not, Korff’s haircut and complexion resemble those of Trump’s and attract many curious looks from other rally-goers.

None among them believe that Trump lost the 2020 election and each is sure that he will win in 2024. Trump entertains a possibility of running again but has not confirmed it yet.

His t-shirt reads, "Trump Won. Deal With It!"

Wellington hosts Trump’s first rally since his January 6 "Stop the Steal" address to his supporters who afterwards breached the Capitol in an attempt to prevent the congressional certification of Joe Biden’s victory in the presidential race. The January 6 events failed to tarnish the glittering image of the former President among the rally-goers.

Bart McIntyre, who brought his two sons to the rally, suspects foul play in the Capitol unrest.

"Who do you think is behind that? It rhymes with FBI and CIA. There were instigators and agitators behind the scene and on it. They opened the door and let good patriots inside - in a trap. And now patriots are in jail. They need to be released and we - we, the people, - need to get to the bottom of all this," he says.

The slogan of the Wellington rally is "Save America."

"Save America from what? Tyranny, communism, the infringement of practically every freedom, second amendment rights, free speech. That’s what he was doing."

"Trump was draining the swamp, he was getting rid of all the pedophiles, corruption and sick child trafficking," Laura Fudger says, possibly referring to a notorious Qanon conspiracy theory depicting the Democratic establishment as "a cabal of pedophiles."

Jerry Riggle arrived at the Wellington rally driving a hearse with a sign "Biden’s last ride."

"It will be his last ride," Riggle laughs and explains his animosity toward the incumbent. "Look at what Biden’s doing. He has given all the workers’ money away, all the stimulus stuff - I think it is $570 billion - that is going to do the roads, railroads and bridges. Who is he doing that for? The Chinese."

He brought $500 to donate for Trump’s new campaigns and is extremely proud of a photo with former Vice President Mike Pence.

"October 6 in Sandusky, Ohio, Mike Pence put his arm around me," Riggle says describing himself as "a firm believer" in Trump and his cause.

According to Trump’s longtime campaign aide Jason Miller, over 500 press credentials were requested for his "Save America" rally.

​A Sputnik correspondent had also requested credentials but failed to obtain them with no reason given for the refusal.

Some locals have a theory why Trump chose their inconspicuous village for his rally. Wellington is located some 40 miles to the southwest of the city of Cleveland. And Grover Cleveland, though he is entirely unrelated to the toponym, is the only president in American history to serve two nonconsecutive terms in office, an accomplishment Trump may seek to repeat.