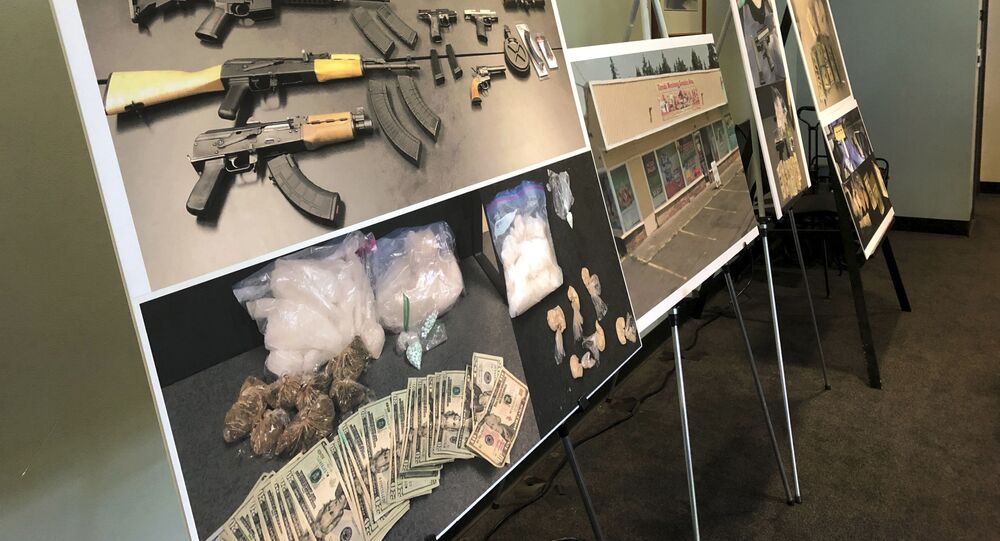 Fifty Years After Richard Nixon Declared a ‘War on Drugs’ is It Time for US to Admit Defeat?

On 17 June 1971 President Richard Nixon made a famous speech in which he declared a “war on drugs.” The term entered the political lexicon and has since become something of a cliché but who is winning the war 50 years on?

The Drug Policy Alliance estimates the US government currently spends around US$51 billion a year on eradicating drugs, intercepting supplies and incarcerating those who smuggle or possess narcotics.

​With the exception of the opioid figures, those numbers have not changed dramatically since the 1970s.

Around 2.12 million Americans are incarcerated in prison and around 200,000 of those are for possession of illegal drugs, or possession with intent to supply.

But of the 700,000 inmates serving sentences for “violent” offences many of them committed their crimes while high on drugs or while trying to obtain the money to buy drugs.

Mexican drug cartels are stronger than ever and organised crime gangs like the 'Ndrangheta in Italy, the Triads in China and the Hells Angels in North America and Europe are making billions from narcotics.

So maybe it is time for the United States to admit it has lost the “war on drugs” and needs to come up with a new strategy.

© AP Photo / Keith Srakocic
Narcotics detective Ben Hill, with the Barberton Police Department, shows two bags of medications that are are stored in their headquarters and slated for destruction, Wednesday, Sept. 11, 2019, in Barberton, Ohio. Attorneys representing some 2,000 local governments said Wednesday they have agreed to a tentative settlement with OxyContin maker Purdue Pharma over the toll of the nation's opioid crisis. (AP Photo/Keith Srakocic)

Let’s look at what President Nixon said and how he launched the “war”.

The press conference at which Nixon made his famous comments followed a request to the US Congress asking for an extra US$155 million, which meant a total of US$350 million a year being spent on combating narcotics.

Nixon, a Republican who represented law and order and conservative values, despised the anti-Vietnam war, hippie culture of the 1960s, where the use of cannabis, LSD and other drugs was widespread.

Nixon's aide, John Ehrlichman, later admitted: "You want to know what this was really all about…We knew we couldn't make it illegal to be either against the (Vietnam) war or black, but by getting the public to associate the hippies with marijuana and blacks with heroin, and then criminalising both heavily, we could disrupt those communities."

In declaring drug abuse in the US to be “public enemy number one” he had an eye on the presidential election which was 18 months away. Among the Democrats vying for the role of nominee were Ted Kennedy, Ed Muskie and George McGovern, all of whom were liberals who Nixon sought to portray as soft on drugs.

Drug-related crime was on the rise in the US. In 1970 there were tens of thousands of heroin addicts in New York city, for example, who were responsible for a wave of acquisitive crime.

So Nixon’s strategy was to tackle the supply of drugs as well as the demand.

The federal Drug Enforcement Administration was created in July 1973 to target the suppliers.

Today the DEA has an annual budget of US$3 billion and employs 5,000 agents as well as many more clerical employees.

But Nixon also pushed through tough mandatory sentences for drug possession and the introduction of no-knock warrants for police officers and DEA agents searching for narcotics.

Nixon was washed away by the Watergate crisis and the “war on drugs” faded in the mid- to late 1970s as economic troubles and Jimmy Carter’s foreign policy blunders took precedence.

But in the 1980s along came crack cocaine and the war was given fresh impetus.

President Ronald Reagan - whose wife Nancy famously fronted a “Just Say No” campaign against drugs - encouraged a crackdown on crack addicts and dealers and this was continued by his successor George H. W. Bush.

© AP Photo / Jae C. Hong
A drug addict prepares a needle to inject himself with heroin in front of a church in the Skid Row area of Los Angeles.

The controversial chief of the LAPD, Daryl Gates, even said “casual drug users should be taken out and shot.”

When a Democrat, Bill Clinton, entered the White House he introduced the “three strikes and you’re out” policy which meant those who committed three felonies had the key thrown away.

But tougher sentences and more drug busts failed to achieve anything.

In 2006 veteran journalist Walter Cronkite spoke out against the “war on drugs.”

Cronkite wrote: "Today, our nation is fighting two wars: one abroad and one at home. While the war in Iraq is in the headlines, the other war is still being fought on our own streets. Its casualties are the wasted lives of our own citizens. I am speaking of the war on drugs. And I cannot help but wonder how many more lives, and how much more money, will be wasted before another Robert McNamara admits what is plain for all to see: the war on drugs is a failure."

Two years later Barack Obama was elected President and chose to make no changes to government policy on tackling the supply of drugs or the penalties for possessing narcotics.

© AFP 2021 / SAUL LOEB
US President Barack Obama speaks alongside US Vice President Joe Biden about the Supreme Court's ruling to uphold the subsidies that comprise the Affordable Care Act, known as Obamacare, in the Rose Garden of the White House in Washington, DC, June 25, 2015

His Vice President, Joe Biden, is now in the White House and is coming under pressure from several Democrat senators to change the strategy, especially when it comes to marijuana.

Senate Majority Leader Chuck Schumer co-authored a statement with Senator Cory Booker and Senator Ron Wyden in which they said: "The War on Drugs has been a war on people - particularly people of colour. Ending the federal marijuana prohibition is necessary to right the wrongs of this failed war and end decades of harm inflicted on communities of colour across the country."

Possession of cannabis and marijuana is legal for medical use in many US states and is also legal for recreational use in California, Washington, Illinois, New York and even Virginia.

But heroin, cocaine, methamphetamines and MDMA (ecstasy) remain prohibited in all US states.