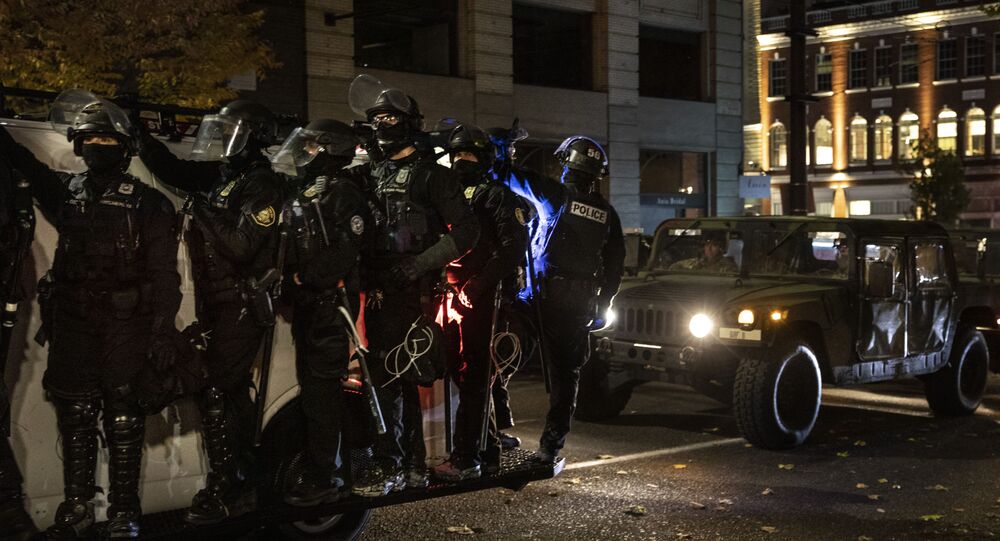 Last year, photographer and activist Teri Jacobs sued policeman Corey Budworth for the use of excessive force during a protest, after he knocked her to the ground and struck her head with his baton. An internal police review found the actions "reasonable, permissible, and in accordance with his training."

All 50 members of the Portland police’s highly-trained rapid response unit resigned on Wednesday in protest after their fellow employee, Corey Budworth, was indicted on Wednesday for assaulting independent photojournalist Teri Jacobs with his baton during an August 2020 protest, according to Fox News.

"Unfortunately, this decorated public servant has been caught in the crossfire of agenda-driven city leaders and a politicized criminal justice system," the Portland Police Association said in a statement on Tuesday, shortly after a grand jury issued its verdict.

The resignations reportedly entered into force on Wednesday at a time when Portland police are said to be facing a lack of personnel needed to clear roads during potential future protests.

The incident took place on 18 August, 2020, when a group of nearly 200 protesters said to have been armed stormed the Multnomah Building in southeast Portland, according to police. The protestors lit some dumpsters on fire and damaged the building, before someone threw a Molotov cocktail-style incendiary device that caused a blaze.

"After nearly 75 consecutive nights of violence, destruction, and mayhem, a small group of RRT (Rapid Response Team) officers—including Officer Budworth—were again tasked with dealing with the riot," the Portland police union representative said. "Per PPB Command Staff orders, RRT officers cleared the rioters from the area to allow the Fire Bureau to extinguish the blaze. But the rioters were not satisfied."

When protesters regathered again and approached the Multnomah building, one officer "was forcefully knocked to the ground", according to police, who reported that his colleagues pepper sprayed protestors and used other, less harmful equipment, as the mob reportedly became more violent.

When some protesters hindered an officer as he tried to make an arrest, other policemen, including Budworth, hit protestors with batons to “try and stop the crowd’s criminal activity.”

"Per his training and in response to the active aggression of a rioter interfering with a lawful arrest, Officer Budworth used baton pushes to move a rioter, now known to be Teri Jacobs, out of the area," the police union stated.

According to a video shared in social media, the officer chased and shoved the photographer to the ground before knocking a helmet off her head with his baton. The union claimed that Budworth used the baton "push", "reasonably believing that she was getting back up to re-engage in her unlawful activities.”

"The location of Officer Budworth’s last baton push was accidental, not criminal. He faced a violent and chaotic, rapidly evolving situation, and he used the lowest level of baton force—a push; not a strike or a jab—to remove Ms. Jacobs from the area," the police union said.

Jacobs filed a lawsuit for excessive use of force and one count of fourth-degree assault. The city reached a $50,000 settlement in February, in addition to paying $11,000 for the attorney fees of both the defendant and the plaintiff.

Hey @PortlandPolice is officer 37 going to be fired from his job? Or is this not enough evidence for you? #PortlandProtesters pic.twitter.com/eyhoMDk58d

The Portland Police Association union criticized Multnomah District Attorney Mike Schmidt for what they claim was ignoring that protests turn violent and Jacob had acted like a “criminal.”

Members of the police union also claimed that Budworth did exactly what he was trained to do, noting that the Portland Police Bureau’s own experts reviewed his actions and found them "reasonable, permissible, and in accordance with his training."