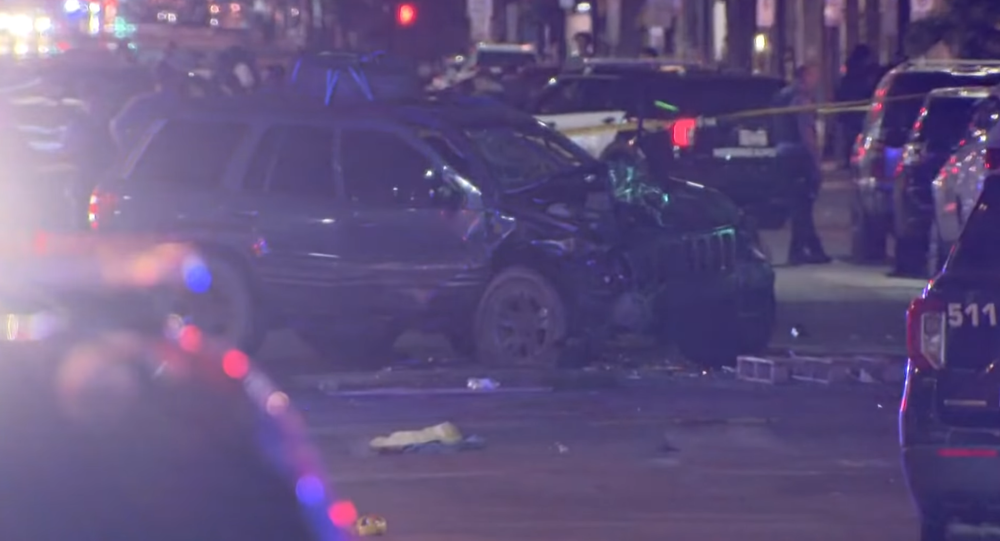 At a Sunday protest on behalf of a black man killed by federal police in Minneapolis earlier this month, a car plowed into the crowd, killing one woman and wounding two others. The incident comes more than a year after George Floyd’s murder in the same city and just days after the city tried to dismantle a monument to his memory.

Protesters had blocked off an intersection in Minneapolis, Minnesota’s Uptown district on Sunday to draw attention to the police killing of 32-year-old Winston Smith when a speeding SUV slammed into a parked car, sending it flying into a group of demonstrators.

One woman, 31-year-old Deona Erickson, died at the hospital after being slammed into a light post by the impact; three others were also hospitalized with less serious injuries, according to local media. The driver of the car was taken to the hospital as well, having reportedly attempted to flee the scene, but was held until police arrived by other protesters, who detained him.

She positioned her vehicle in a way that would protect other protestors in case anyone would attempt to ram into them. Unfortunately, she was struck by her vehicle when someone did that very thing. She saved lives in Uptown.

May she rest in peace. #Minneapolis pic.twitter.com/6OIWu9Seya

​Photos from the scene showed two mangled cars, one with a frontal impact and another struck on its right side. According to Minnesota Public Radio (MPR), the struck car had been parked across the traffic lane as a barrier to protect the crowd against just such an incident occurring.

One has been pronounced dead after a vehicle drove through protesters and their barricades sending 3 to the hospital. The protesters, who've been gathering in Uptown Minneapolis since the Winston Smith killing, apprehended the driver who was then arrested by police. pic.twitter.com/3bHDnKquGh

​Minneapolis Police Department spokesperson John Elder was quoted by local media as saying the department was investigating the incident and at the time had no clear motive, but noted that "the use of drugs or alcohol ... may be a contributing factor in this crash.”

One protester who posted on Twitter said numerous police in riot gear responded to the scene before an ambulance did, but did not help the wounded Erickson.

Street medics performed CPR and resuscitated her. Community apprehended the driver. Cops just showed up and threatened everyone with mace, arrests, and rubber bullets.

​Community ‘No Longer Have Faith’ in Police Narratives

The intersection where the protesters were gathered was adjacent to a parking garage where Winston Smith had been killed on the afternoon of June 3 by US Marshals who were part of the “North Star Fugitive Task Force.” According to a statement by the Minnesota Department of Public Safety Bureau of Criminal Apprehension, police had a warrant for Winston on a felony firearms violation, and when they confronted him in the parking garage, they shot Winston dead.

“Evidence at the scene indicates that the man fired his weapon from inside the vehicle. BCA crime scene personnel recovered a handgun as well as spent cartridge cases from inside the driver’s compartment,” the BCA statement says.

Winston Boogie Smith. That's the name of the Black man murdered by Hennepin County sheriff's deputies yesterday around 2:00 PM in Uptown, Minneapolis. They murdered him and then attempted to use the media & local orgs to push their narrative; it didn't work. #WinstonSmith pic.twitter.com/5jdXeufm3s

​However, at a Thursday press conference, the woman who was with Winston at the time of the incident said not only did Winston not fire a gun at the officers - he doesn’t even have one.

“She never saw a gun on Winston Smith, and she never saw a gun inside the vehicle at any time,” Racey Rodne, an attorney for the woman, said at a press conference. She was not identified, but it was noted that she had been injured during the incident by broken glass as a result of the officers’ gunshots.

While body camera footage has been increasingly relied upon to verify or disprove officers’ claims about the sequence of events during violent incidents, that evidence won’t be available for this case because, according to the BCA, “the US Marshal Service currently does not allow the use of body cameras for officers serving on its North Star Fugitive Task Force. There is no squad camera footage of the incident.”

In other words, it’s the Marshals’ word against hers.

“We no longer have faith in just believing the narratives that the police give us. They have forfeited their right to just tell us a story,” Toshira Garraway, a Minneapolis community activist and founder of Families Supporting Families Against Police Violence, said at a June 5 press conference. “We need facts, and the fact is any video footage. And we refuse to believe that no one has any video footage after all those departments showed up yesterday.”

The incident happened just hours after the city moved to clear the memorial to George Floyd, the 46-year-old black man whose May 2020 murder by MPD set off nationwide protests against racism and police brutality, about two miles from where Winston was killed. The city removed large concrete barricades protecting a memorial shrine to Floyd early on June 3, but activists had replaced the shrine before the day was out.

Another fist has been placed at the south Barricade near 39th and Chicago. @MPRnews pic.twitter.com/hjYxBvKWEJ

​The city made a second attempt on June 8, but protesters rallied to halt the demolition and the city called off their efforts.

Protests have rocked Minneapolis since Smith’s death, with the occupation of the intersection outside the Uptown parking garage being just one of several protest sites. At one point, they painted the garage access road red and wrote “the blood is on your hands,” with red handprints on the pavement. When the city power-washed the mural off and the property owner painted over the mural with an LGBTQ pride rainbow akin to those commonly seen on crosswalks during the month of June, protesters then painted over the rainbow with a larger version of their original mural that said “stop the coverup.”

They were not done when I walked by last night 😍 pic.twitter.com/BIRcp7o2S0

​At the Sunday rally prior to the car attack, activist Toussaint Morrison said the protests would continue until Smith is exonerated.