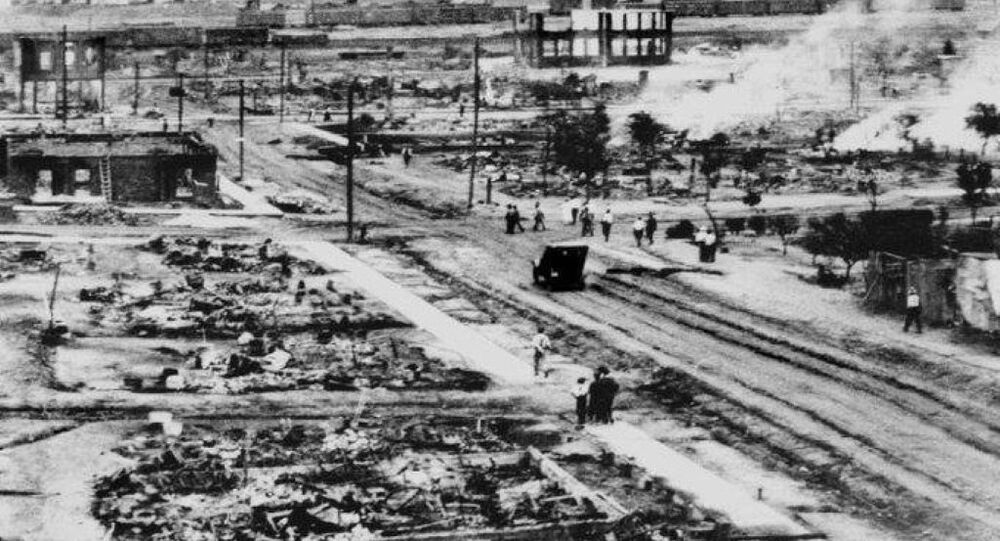 The 1921 Tulsa Race Massacre, which claimed the lives of at least 36 people, is believed to be the single worst episode of racial violence in the history of the United States.

Organisers have abruptly cancelled a key event to commemorate the 1921 Tulsa Race Riot in Oklahoma after legal representatives for survivors demanded more money than previously agreed.

The 31 May "Remember and Rise" ceremony was put on hold when organisers referred to "unexpected circumstances with entertainers and speakers".

Kevin Matthews, chairman of the Tulsa Race Massacre Centennial Commission, for his part, told reporters on Friday that lawyers for the three living survivors approached the commission over including them in the ceremony in return for $100,000 each and a $2 million seed gift to a reparations coalition fund.

This year is the centennial of the 1921 Tulsa Race Massacre in the Greenwood District of Tulsa, Oklahoma. This clip from @SmithsonianChan features colorized archival scenes from Greenwood & neighboring communities, filmed 1925-1928. #Tulsa100 pic.twitter.com/rRBM3mAWWT

After the parties agreed to those terms, the lawyers suddenly decided to request $1 million for each and $50 million for the fund, according to Matthews.

"We could not respond to those demands. I absolutely want the survivors, the descendants and others that were affected to be financially and emotionally supported, however this is not the way, no matter how hard we try", he underscored.

The commission voiced hope that it would reschedule the "Remember and Rise" ceremony, which was earlier touted as a cornerstone event featuring Grammy Award-winning singer John Legend and influential House Democrat Stacey Abrams.

Over 1,200 businesses across 35 blocks were destroyed, and more than 10,000 people lost their homes. While only 39 dead black men were confirmed by a state commission in 2001, there are rumours that African Americans were dumped in mass graves as authorities sought to cover up the hate crime.

In 2019, Scott Hammerstedt, a senior researcher at the Oklahoma Archeological Survey, told CBS News that his team discovered what they believe to be an underground pit large enough to contain up to 100 bodies, thought to be the victims of the Tulsa Riot Massacre.