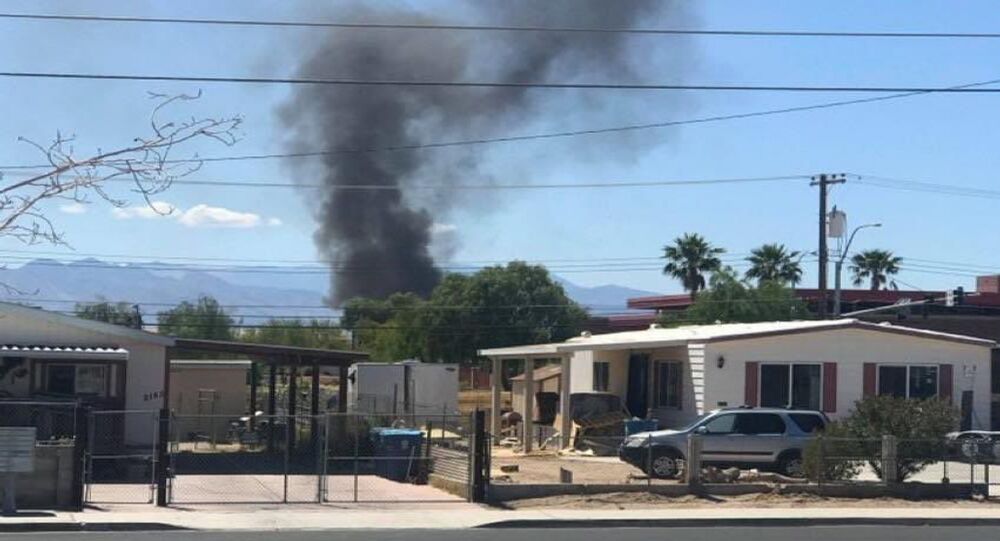 Videos: US Military Plane Crashes Into House Near Nellis AFB in Nevada

According to local media, the cause of the incident has not yet been determined. One death was reported, but it remains unclear whether the fatality was the pilot of the crashed plane or a civilian, a resident of the house or its surroundings.

A United States military plane crashed in the backyard of a home near Nellis Air Force Base in Nevada on Monday, local media reported.

"A contractor-operated aircraft that took off from Nellis Air Force Base crashed at approximately 2:30 pm May 24 outside the southern edge of the base," the military base said in a statement released on Twitter, adding that multiple local and federal officials are on scene conducting an investigation.

Local media reported that the incident took place at 2245 N. Christ Lane, south of the base.

The local authorities did not immediately provide confirmation on the reports of deaths as a result of the crash. Moreover, the type of the aircraft involved in the incident remains unknown.

#BREAKING: @ClarkCountyFD confirms the pilot involved in the plane crash near @NellisAFB has died. Still unclear if they died in or after the crash. There’s a heavily police and fire dept. presence in the area of Carey & Christy. @8NewsNow #8NN pic.twitter.com/zHfuffEv7h

Some local media reports, however, claimed that it was the pilot who was pronounced dead at the scene of the incident, without specifying the identity or the exact cause of death, although some eyewitnesses said a parachute was seen in the air prior to the explosion.

Road traffic from a nearby street was reportedly detoured to neighboring ones, local media reported.

"We are praying for all those involved in today's incident – especially the men and women of@NellisAFB and the first responders at the scene," Nevada Governor Steve Sisolak tweeted shortly after the incident took place.

Several social media users, claiming to have served at the airbase, said in response to the news that the incident might have involved Draken Mirage F-1 aircraft, which allegedly had issues prior to the crash.