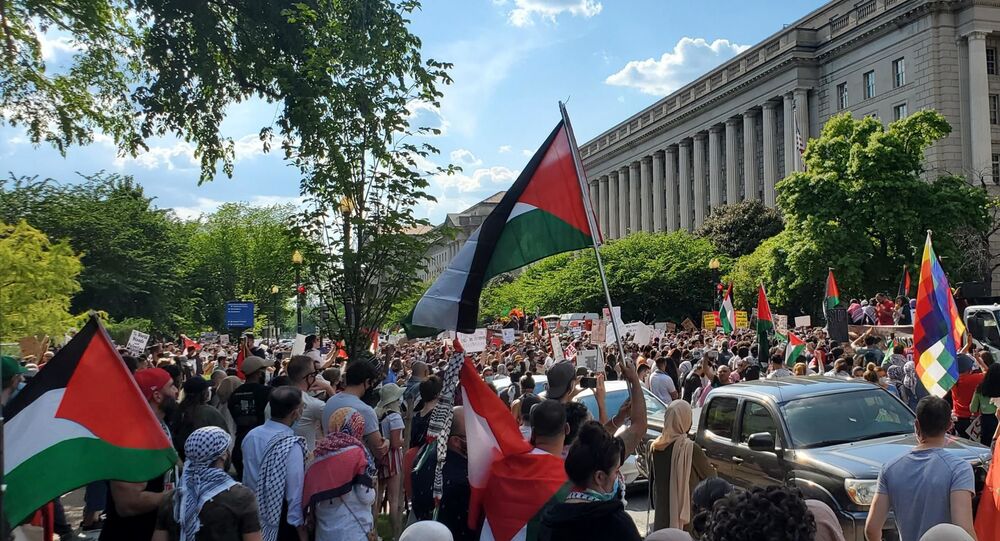 Palestine solidarity activists have called for demonstrations in dozens of US cities on Saturday, protesting Israeli airstrikes in Gaza and the recent violence by Israeli police and citizens in Palestinian neighborhoods of Jerusalem. The protests fall on the 73rd anniversary of Israel’s declaration of independence in 1948.

While sizeable demonstrations have popped up in several US cities throughout the week, much larger protests are expected on Saturday as groups in more than 65 cities have signed onto a national call to action posted by the Palestinian Youth Movement and the Act Now to Stop War and End Racism (ANSWER) Coalition.

Thousands gathered at the Washington Monument in Washington, DC, on Saturday afternoon, before marching through the city. The US capital city has seen several protests this week, including one on Tuesday with several hundred people that included US Reps. Andre Carson (D-IN) and Rashida Tlaib (D-MG), the latter of whom is Palestinian and has been blocked by the Israeli government from visiting her family in the West Bank.

​One journalist estimated 10,000 people in attendance at the DC protest.

There’s easily over 10,000 marching for Palestine in DC pic.twitter.com/eMcJpMvbtf

Sputnik Photograph
Demonstrators protesting in solidarity with Palestine gather near the Washington Monument in Washington, DC, on May 15, 2021. The date marks 73 years since al-Nakba ("The Catastrophe"), the Palestinian name for the founding of the state of Israel in 1948.

“In response to the mobilization of tens of thousands of Palestinians to defend the right to live in the Palestinian neighborhood of Sheikh Jarrah in East Jerusalem and worship at the Al-Aqsa mosque, Israel has unleashed murderous actions all across occupied Palestine,” ANSWER said in a statement.

“The depth and breadth of the Palestinian resistance has shocked the ruling establishments in Israel, the US, European Union and many regimes in the region, including Jordan, whose population is more than half of Palestinian descent and which is the official “guardian” of the Al-Aqsa mosque,” the statement continues. “The new wave of resistance has seen mass protests not only in cities and towns across the West Bank and East Jerusalem, but also in many Palestinian cities inside the 1948 borders of Israel. From the latter cities, thousands of Palestinians have traveled to take part in Ramadan prayer at the Al-Aqsa and many have joined the protests outside the mosque and Sheik Jarrah. Solidarity protests have taken place in many other countries, including a huge march in Yemen.”

Large marches were also reported in the California cities of San Francisco and Los Angeles, and in Philadelphia, Pennsylvania, and New York City.

The energy here in SF is just incredible. Thousands marching through the Mission in solidarity with Palestine. Palestine WILL be free! pic.twitter.com/Rv3vPjgGE3

NOW Over a thousand demonstrators in Los Angeles hold a moment of silence for victims of Israeli war crimes pic.twitter.com/PsbbYQ46WR

Turnout at LA protest for Palestine was incredible. The biggest I’ve ever seen in the 12yrs I’ve been here. Mostly youth. Even as we were leaving just now, groups of 100s were still arriving after just making it thru police barricades. Keep pushing & this can be a breakthrough! pic.twitter.com/gcaJ0O5tad

​​​In Minneapolis, Minnesota, another sizable protest took place, coverage of which MintPress News editor Mnar Muhawesh Adley reported Facebook not only took down, but disabled her account over.

Was trying to Livestream massive Nakba Day rally in Minneapolis on Facebook but it took down my page pic.twitter.com/a3Mx31R2rd

​Their demonstrations accompanied large protests in London and other European cities, as well as in the West Bank, East Jerusalem, and Israel. In Paris, police attacked a banned protest with water cannons.

Since hostilities began, the armed wing of Gazan ruling party Hamas has launched more than 2,300 rockets into Israel, according to a count by the Israeli Defense Forces, striking targets in cities as far away as Tel Aviv, where the IDF headquarters are located, and knocking out electricity in the coastal city of Ashdod. In turn, the IDF has pounded Gaza, launching more than 1,000 missiles and artillery shells that have destroyed numerous apartment buildings, including several housing the offices of international media outlets like the Associated Press and Al Jazeera.

© AFP 2021 / Mahmud Hams
A ball of fire erupts from the Jala Tower as it is destroyed in an Israeli airstrike in Gaza city controlled by the Palestinian Hamas movement, on 15 May 2021.

Palestinian Ambassador to the EU Abdalrahim Alfarra told Sputnik Saturday that Sven Koopmans, the European Union’s special representative for the Middle East Peace Process, would be convening a meeting with the Middle East Quartet of international mediators - Russia, the US, EU, and UN - on the conflict. However, the administration of Israeli Prime Minister Benjamin Netanyahu has repeatedly stated it is not interested in de-escalation, and he pledged in a Saturday speech to continue taking action against Hamas.

Saturday is also the 73rd anniversary of the 1948 declaration of Israeli independence, which Palestinians call al-Nakba - “the catastrophe.” Territory seized from the Ottoman Empire by the United Kingdom in 1917 was to be partitioned by the United Nations into land for both Zionist Israeli settlers and native Palestinian Arabs, but in the war with several surrounding Arab states that followed, Israeli paramilitaries expelled more than 700,000 Palestinians and seized a large part of the territory set aside for them. Denied the right to return after the war ended, those Palestinians evicted by the war became refugees, many of whom continue to live in surrounding lands, including Gaza.