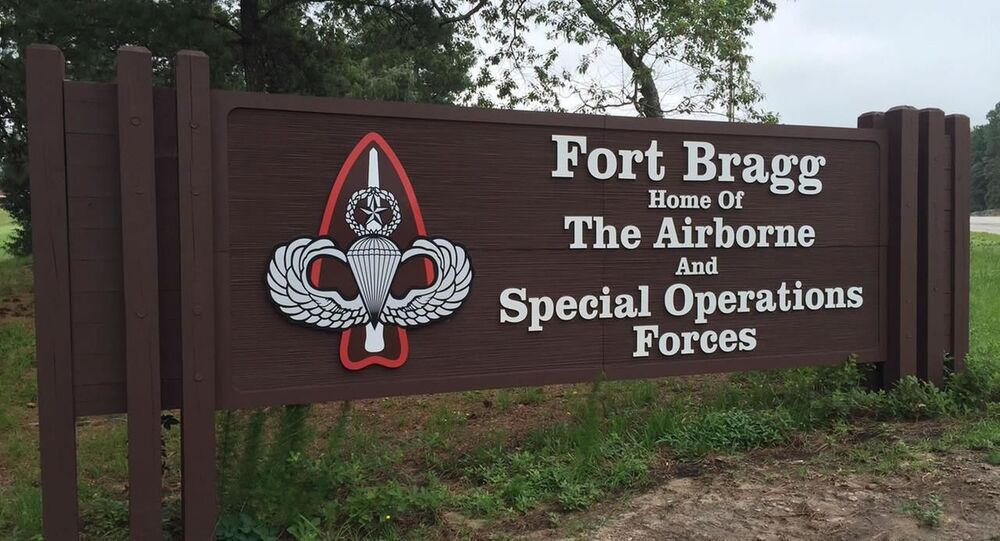 As US Rebrands Bases Named After Confederates, What Other Nation Would Have Honoured Traitors?

The American Civil War was fought between 1861 and 1865 with the North eventually defeating the South. More than a million soldiers died as the southern Confederacy, which sought to hold on to slavery, rebelled against the United States.

.The US military has been given up to three years to rename 10 army bases and two navy ships which honour Confederate generals or their achievements.

Trump had vetoed the act - which approved US$740 billion of defence spending - because Senator Elizabeth Warren had included a provision to rename bases such as Fort Bragg, which are named after Confederate leaders.

So what are these bases and who are they named after?

Probably the most important base on the list is Fort Bragg, which was created in September 1918 by the Chief of Field Artillery, General William J. Snow.

The US Army’s website says it was "named for a native North Carolinian Gen. Braxton Bragg for his actions during the Mexican-American war."

​But what it does not say is that after retiring from the US Army Bragg became a plantation owner in Louisiana and when the Civil War broke out he joined the Confederacy and led rebel troops at the Battle of Shiloh and several other clashes, all of which he was on the losing side in.

Fort Bragg is the home of the US Army’s special forces, the 82nd Airborne Regiment, the 75th Ranger Regiment and the Air Force Combat Control School.

The Fayetteville Observer suggested it be named Fort Gavin after General James Gavin, who led the 82nd Airborne on D-Day.

Lloyd Austin, who was appointed Defense Secretary by Joe Biden, was a Lieutenant Colonel with the 82nd Airborne Division at Fort Bragg in 1995 when two white soldiers killed a couple simply for being black.

A Pentagon report published in March this year said the military was still riven with white supremacist groups.

Fort Lee (Virginia)
Fort Lee, which is just south of Richmond, Virginia, is the headquarters of the US Army Combined Arms Support Command and home of the army’s Quartermaster Museum.

It is named after the most famous Confederate general of them all, Robert E. Lee, who led the rebel army and finally surrendered at Appomattox Court House in 1865.

At the start of the Civil War Lee commanded the Army of Northern Virginia, which invaded the North and tried to defeat the Union militarily in order to force the United States to allow the Confederate states to go their own way.

After the war Lee was pardoned but his former estate in Virginia was seized by the US government and converted, ironically, into Arlington National Cemetery.

Fort Benning (Georgia)
There had been a military base on the borders of Georgia and Alabama since the 19th century but Fort Benning was founded in the final month of the First World War and was meant as a training base for US troops heading to Europe to fight under General John Pershing.

After the Germans surrendered in November 1918 Fort Benning was already set in stone and in the 1920s several barracks buildings, known as cuartels, were constructed.

© AP Photo / Gerry Broome
A Black Lives Matter billboard is seen next to a Confederate flag in Pittsboro, N.C., Thursday, July 16, 2020. A group in North Carolina erected the billboard to counter the flag that stands along the road.

Nowadays it is home to 120,000 soldiers, and is the home of the United States Army Maneuver Center of Excellence, the US Army Armor School, US Army Infantry School and the Western Hemisphere Institute for Security Co-operation, formerly known as the School of Americas, which once trained torturers in Latin American countries.

So, does this mean they are not renaming Fort Benning to Fort Trump?

​Fort Benning is named after General Henry L. Benning, who led the Confederate Army against the Union at the second Battle of Bull Run, Antietam and Gettysburg.

Military.com suggested, with tongue-in-chek that it could renamed after the nickname of local hero Calvin Johnson, a former NFL wide receiver - Fort Megatron.

Fort Hood (Texas)
Fort Hood, near Waco in Texas, is the home of the 1st Cavalry Division and the 3rd Cavalry Regiment.

The 3rd Cavalry Regiment dates back to 1846 and saw action in the Indian Wars, including against the Sioux and Cheyenne in the infamous Little Bighorn campaign.

At the conclusion of today's Housing Development Ceremony at #FortHood's Chaffee Village, an excavator took a swing at a home prepared for demolition. Over the next five years, hundreds of new homes will be built at the Great Place. @ArmyIMCOM @ArmyMateriel pic.twitter.com/ewOuuMuJzI

​Fort Hood is named after John Bell Hood, a Confederate General who was born in Kentucky and died in Louisiana.

It is not clear why the army would name a base in Texas after him.

Fort Polk (Louisiana)
Fort Polk in Louisiana was a basic training base for new recruits being sent to the Vietnam War.

Nowadays it is home to the Joint Readiness Training Centre, the 3rd Brigade Combat Team, the 10th Mountain Division and the 115th Combat Support Hospital.

It is named after Leonidas Polk, a Louisiana bishop and the founder of the Protestant Episcopal Church in the Confederate States.

Fort Gordon (Georgia)
Fort Gordon is home to the US Army Signal Corps, Cyber Command and Cyber Center of Excellence.

It is named after John Brown Gordon, one of Robert E. Lee’s most trusted generals.

After the war he was elected to the US Senate and in 1903 he published Reminiscences of the Civil War. He died the following year.

Fort Pickett (Virginia)
Fort Pickett, a National Guard base in Virginia, is named after  Major General George Pickett who led one of the most ill-advised attacks in military history.

Pickett’s Charge - which was against the advice of Robert E. Lee - ultimately led to the Confederate defeat at the Battle of Gettysburg.

The base is named after Ambrose Powell Hill, a Confederate General who did not live to see the South’s defeat but had always said he had no desire to see it.

US National Archives
The view at Trostle's barn in Gettysburg, Pa., after the key Civil War battle from July 1-3, 1861.

On 2 April 1865 - a week before Robert E. Lee surrendered - he was shot dead by a Union soldier at the Battle of Petersburg.

Military.com said: “Although one of the more capable commanders on the list, this Confederate general's accomplishments include…getting shot seven days before the war ended and having gonorrhea for 21 years.”

Fort Rucker (Alabama)
Fort Rucker is primarly a training centre for US Army pilots and is home of the United States Army Aviation Centre of Excellence.

It is named after Colonel Edmund Rucker, a Confederate commander who had his left arm amputated after being wounded and captured by the enemy.

Confederate General Nathan Bedford Forrest organised a prisoner exchange which meant that Rucker was back on the rebel side by the end of the civil war.

After the war he became an industrialist and made a fortune out of coal and steel in Birmingham, Alabama.

It is named after Confederate General Pierre Gustave Toutant-Beauregard, who was nicknamed The Little Frenchman.

Beauregard won the first Battle of Bull Run but spent most of the war in the Western Theatre and had a poor relationship with Confederate President Jefferson Davis.