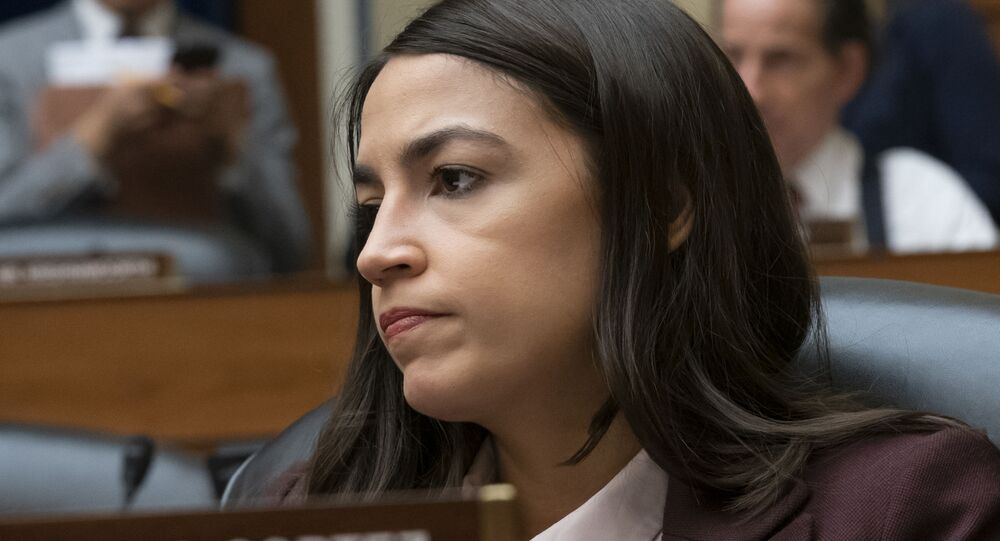 House Speaker Nancy Pelosi and Rep. Alexandria Ocasio-Cortez are not the best of friends, that’s for sure. Nor is Pelosi a fan of a group of progressive congresswomen of colour known as the ‘Squad’, with the speaker repeatedly trading barbs with the vocal bunch.

Nancy Pelosi offered blunt advice to the “Squad” when speaking to veteran journalist Susan Page for her upcoming biography “Madam Speaker: Nancy Pelosi and the Lessons of Power”, the Axios reports.

According to the book’s preview, in one of ten interviews with USA Today's Washington bureau chief, Pelosi addressed the leftist group: “You’re not a one-person show. This is the Congress of the United States.”

This was also the time when the House speaker apparently mocked Alexandria Ocasio-Cortez, a 31-year-old New York representative, by adopting “a child-like voice” during the interview, Axios says ahead of the book’s release on 20 April.

© AP Photo / Patrick Semansky
House Speaker Nancy Pelosi of Calif., walks to a lectern to answer a reporter's question during a news conference before participating in the House Democratic Issues Conference on Capitol Hill in Washington, Tuesday, March 2, 2021

In December 2020, Ocasio-Cortez (simply known to many as AOC) told The Intercept that it was time for Pelosi to leave the House Speaker post. She also complained that Pelosi – and the Democratic party in general – have not been building new leadership.

The speaker later replied sarcastically to the accusations when speaking to CBS News host Lesley Stahl: “you’ll have to ask her — because we are.”

Stahl pointed at some frustration in her words but Pelosi moved on to clarify: she was not “dismissing” AOC, she actually respected the young politician with a large social media presence. But the 81-year-old politician still didn’t miss a chance to poke the self-described socialist a bit, saying that AOC was “effective, as are many other members in our caucus that the press doesn't pay attention to”.

© AP Photo / J. Scott Applewhite
From left, U.S. Reps. Rashida Tlaib, D-Mich., Ilhan Omar, D-Minn., Ayanna Pressley, D-Mass., and Alexandria Ocasio-Cortez, D-N.Y., respond to base remarks by President Donald Trump after he called for four Democratic congresswomen of color to go back to their "broken" countries, as he exploited the nation's glaring racial divisions once again for political gain, during a news conference at the Capitol in Washington, Monday, July 15, 2019

Despite this appeasing rhetoric, Page writes that behind the scenes Pelosi’s "anger at the four new progressive congresswomen” – implying Ocasio-Cortez and other Democratic Representatives Ilhan Omar, Ayanna Pressley and Rashida Tlaib – was “palpable.”

So it looks like Nancy Pelosi and ex-president Donald Trump actually do have something in common.