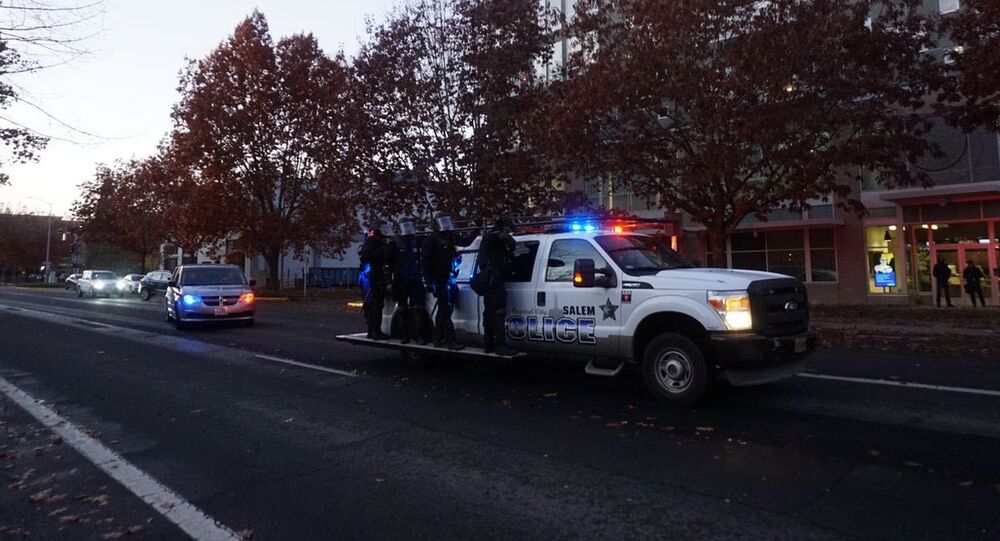 Last year, protests against racism and police brutality engulfed the United States. In the wake of those events, the previous US administration proposed designating Antifa as a terrorist organisation, with the president condemning "violence instigated and carried out by Antifa and other similar groups in connection with the rioting".

More than a hundred “heavily armed” protestors have descended on the Oregon State Capitol, with the local police advising citizens to avoid the capitol mall area.

“There are approximately 150-200 participants that are heavily armed at the capitol at this time,” the police tweeted.

#salemoregon UPDATE at 1415
1⃣/4⃣: Protest events at the @OregonCapitol have increased in size/risk to public safety. There are approximately 150-200 participants that are heavily armed at the capitol at this time.

The police warned the protestors that they are participating in an illegal event and told them to disperse, saying that “failure to do so may result in arrest”. The Oregon State Police and the Salem Police Department's crowd management teams then started removing the protestors from the streets.

#Antifa brought their flag, weapons and riot gear to their violent protest gathering at the Oregon state Capitol in Salem. #AntifaRiots pic.twitter.com/AYsZqCCrel

Multiple videos on social media show the protesters throwing paint balls and projectiles and smashing windows on cars driven by conservative activists, who reportedly travelled by car from a gathering spot in Sandy.

A chud car is surrounded and they bear mace the crowd as they leave #SalemOregon #PortlandProtests #Antifa #ProudBoys #BlackLivesMatter pic.twitter.com/mGvzHwrtlA

#Antifa at the Oregon state Capitol in Oregon steal a flag off a truck, then pelt it with rocks. #AntifaRiots pic.twitter.com/F5aQqWnGwj

#Antifa continue to attack people driving by in front of the Oregon state Capitol. Here, they smash out a truck driver's window. #AntifaRiots pic.twitter.com/0kymKPxSfq

#Antifa impaled the red truck with a large tree branch during their mob attack on the vehicle outside the Oregon state capitol. There was a female passenger in the vehicle at the time who was nearly killed. #AntifaRiots pic.twitter.com/WZARAZoT5A

One of the truck drivers who got the tail lights of his vehicle smashed after he pulled over, pulled a gun on the protestors after they started surrounding him with batons and what appear to be pepper spray cans, and smashed his window. The man told the protestors to get away from him, then dropped his gun on his truck’s cargo bed and quickly complied with the police officer demanding him to lay on the ground. The man was reportedly released from custody later and allowed to return to his truck.

Another angle shows how many Antifa insurrectionists surrounded the driver pic.twitter.com/wVdFkS1wQU

“If he was black, he’d be dead!” #Antifa are upset the police did not kill the man outside the Oregon state Capitol. pic.twitter.com/qPPB22NmSm

The police declared the protest "unlawful assembly" and formed a line in front of the Capitol.

#salemoregon UPDATE at 1550
Arriving opposing protestors were diverted away from the @OregonCapitol. @ORStatePolice and SPD crowd management teams are moving the capitol area protestors onto the mall grounds and off Court ST.

#salemoregon UPDATE at 1542 Audible announcements: You are participating in an unpermitted event and blocking Court ST. Exit the roadway and obey all laws. Failure to do so may result in arrest. Stay on the sidewalks and exit the roadway. pic.twitter.com/lG13ggA8AZ