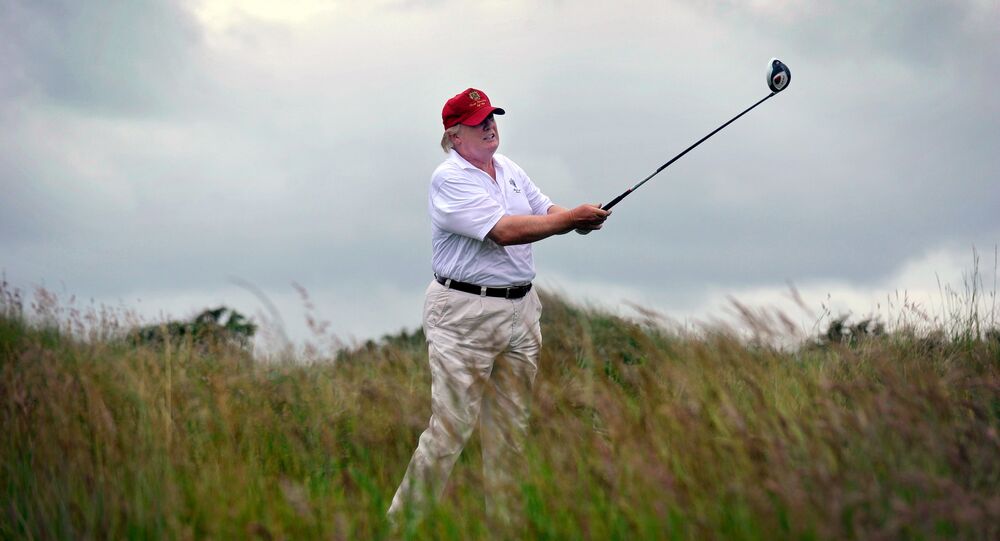 The US president made headlines on Friday as he fell three times in a row while boarding Air Force One ahead of his trip to Atlanta.

Donald Trump Jr. has created yet another twitterstorm on Friday after he shared an edited video of his father, the former US President Donald Trump, knocking the current president Joe Biden down with a golf ball.

In the beginning of a nine-second video, Trump is seen on a gold field hitting a ball, which, with a little help of editing, lands on Joe Biden’s head and thus causes him to stumble on the stairs – all three times. “It wasn’t the wind folks,” the clip’s caption reads.

Trump’s tweet has immediately sparked controversy, with many netizens accusing him of childish behavior, as well as of disrespecting the president.

oh im sorry, so you're fine with disrespecting a president but you get mad when we made fun of Trump.

A father of 5 posts this. Another day where Jr reminds us that he is devoid of anything resembling judgement or intelligence. I truly feel sorry for your children...

Does every member of the trump family have the intellect of an angry kindergartener?

​Others recalled Trump’s father going down a ramp in a bid to compare the two presidents.

​Some people encouraged Trump Jr. to keep posting, while others expressed their concern about Biden being too clumsy.

Yeah, it's no big deal, although two stumbles and one collapse sets a new record for presidential clumsiness.

I love this! Keep tweeting even though it brings out the haters. Reading the comments from the biden lovers makes me laugh, and makes me sad that they are so delusional. Just like Joe.
And go.....😂🤣😂

​Still, the majority of internet users were displeased with Trump’s post.

Ok that's funny but still, don't make fun of people just because they screw up a few times. We're all human, nobody is perfect. Lol Mike Pence almost fell off completely one time, and same with Obama. So who cares that he fell.

Hard to believe that the son of a former President has so little decency or decorum. The Trump family’s boorish, vulgar behavior may be acceptable to their “base” but most Americans expect greater propriety from 1st Families, past & present.

You obviously haven’t seen the photos and videos from Hunters laptop.