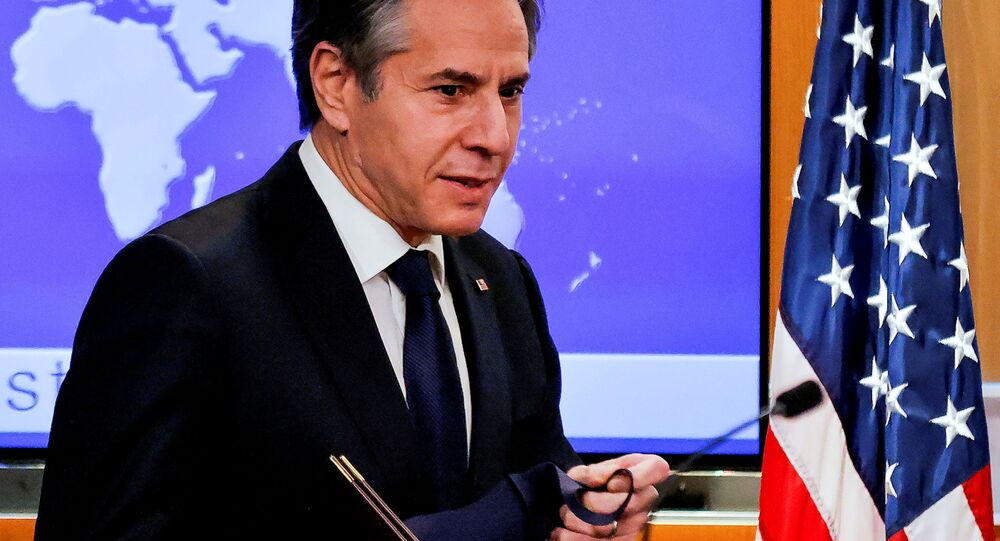 WASHINGTON (Sputnik) - US Secretary of State Antony Blinken has welcomed the decision of the European Union to slap sanctions against Russia under the human rights sanctions regime over the situation with Russian opposition figure Alexey Navalny, State Department Spokesperson Ned Price said in a readout on Monday.

Earlier in the day, EU foreign policy chief Josep Borrell said that the bloc agreed to expand sanctions against Moscow over the situation with Navalny during.

"The Secretary welcomed the EU’s decision to impose sanctions against Russia under the human rights sanctions regime in response to actions taken against Aleksey Navalny and his supporters," Price said.

The Russian Foreign Ministry said the decision is disappointing, noting that Moscow considers calls to release Navalny unacceptable and unlawful.

"We consider categorically unacceptable the constantly sounding unlawful and absurd demands for the 'release' of a citizen of the Russian Federation who was convicted of economic crimes by a Russian court on the territory of our country in accordance with Russian law," the Russian Foreign Ministry stated.

In addition, the ministry accused the EU of interfering in Russia's internal affairs over the threat of new sanctions.

Earlier in February, a Moscow court rescinded Navalny's suspended sentence in the 2014 Yves Rocher fraud case over multiple probation breaches and replaced it with 3.5 additional years in prison. Taking into account the time he had spent under house arrest, Navalny will have to spend some 2.5 years behind bars.

In mid-January, Navalny returned to Russia after receiving treatment in Germany following an alleged poisoning in Siberia. Berlin claims that German doctors found evidence in Navalny's body of poisoning with a nerve agent from the Novichok group.

The OPCW said that the Russian political activist was poisoned with a toxin that resembles Novichok but is not on its list of banned substances. However, Russian doctors said that no such substances were found while Navalny was being treated in Russia.