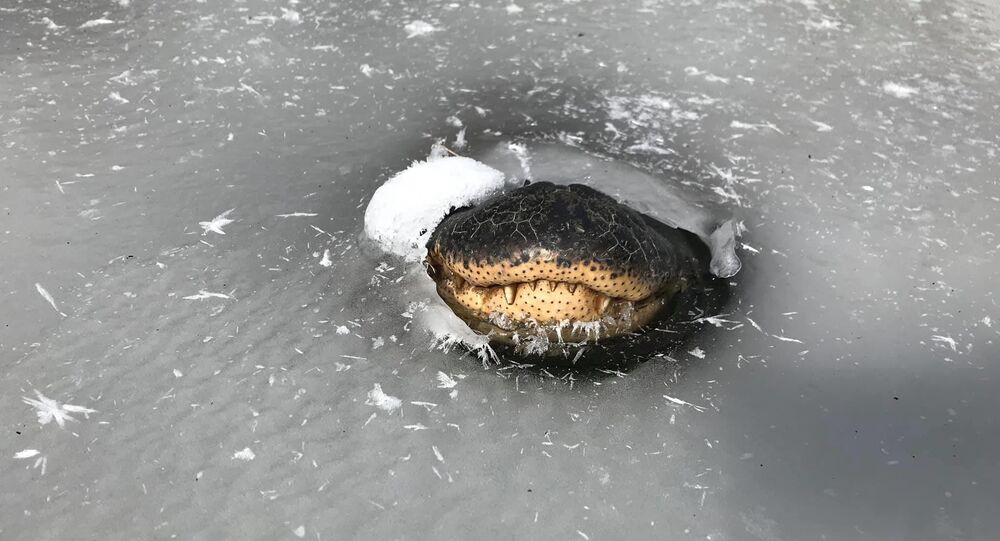 Bad weather has come to the Midwest and the southern part of the US, areas with about 150 million residents. The arctic storm, already dubbed Snowmageddon by some, is accompanied by abnormally low temperatures, which has greatly affected the wildlife of a typically warm region.

To survive the harsh winter temperatures sweeping Oklahoma this week, the American alligators of the state have had to turn to one of their natural instincts, one that distinguishes them from their crocodile relatives.

A number of alligators were caught on camera in the southeastern part of the state sticking their snouts out of the frozen water in the deep freeze, images of which were released by the Oklahoma Department of Wildlife Conservation on Friday. The reptiles are seen breathing with their noses raised above the waterline, while the entire lake around them is frozen.

Alligators sticking their noses through the ice to breathe in SE Oklahoma. Biologists at a wildlife refuge in McCurtain County will be keeping a close eye on them as the water thaws. (📸: David Arbour, Oklahoma Department of Wildlife Conservation) pic.twitter.com/hHvmiPsV9v

​Although the photos initially prompted some netizens to worry about the health of the cold-blooded reptiles, experts ensured that the action, also referred to as "icing" or "snorkeling," was absolutely normal. The phenomenon, also called brumation, helps alligators to slow down their heart rate and metabolism while still retaining the ability to breathe during cold temperatures below water.

Some social media users also questioned the actual habitation of alligators in the state, as the population has increased to a noticeable size over the past several decades, but the state's wildlife department suggested appreciating their cuteness, instead.

Come on Dillon, don't deny the alligators look how cute the babies are. https://t.co/N8mROHRHDe pic.twitter.com/qBLHv1Y1Tt

"The normal response of most other crocs when it gets really cold is to come out of the water and try to bask to get warm again," a retired associate scientist of wildlife ecology and conservation at the University of Florida, James Perran Ross, explained in an interview with LiveScience, adding that since the air is usually colder than the water when the temperature is low, these cold-blooded creatures could have frozen to death if they had left the water.