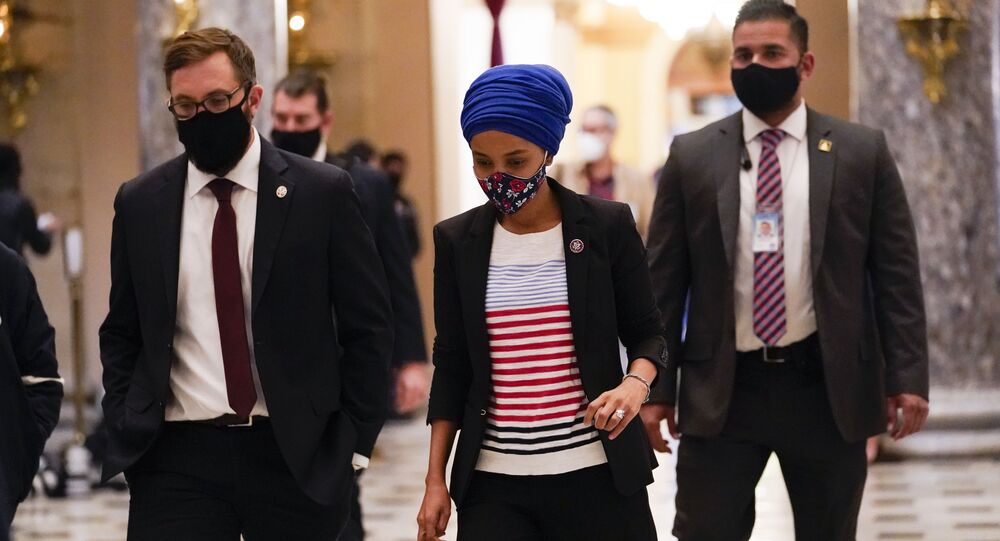 The freshman representative from Georgia has aroused no shortage of anger since her November 2020 election, including for her support of conspiracy theories ranging from Qanon to claiming the September 11 attacks and Sandy Hook school shooting were faked.

Republican lawmakers in the US House of Representatives are threatening to remove Rep. Ilhan Omar (D-MN) from her committee assignments if Democrats proceed with their own push to remove Rep. Marjorie Taylor Greene (R-GA).

Fox News first reported the story on Wednesday, noting that the proposed Republican amendment would cite past accusations of anti-Semitism leveled against Omar for her criticisms of Israel and the Israeli lobby in the United States. Reps. Brian Babin (R-TX), Jeff Duncan (R-SC), Jody Hice (R-GA), Andy Biggs (R-AZ), and Ronny Jackson (R-TX) are the reported sponsors of the initiative.

House Majority Leader Steny Hoyer (D-MD), who leads the Democrats in the lower chamber, announced that a floor vote could be held on removing Greene from her positions on the Education and Budget committees as soon as Thursday.

© REUTERS / Erin Scott
U.S. Rep. Marjorie Taylor Greene (R-GA) wears a "Trump Won" face mask as she arrives to take her oath of office as a member of the 117th Congress in Washington

The GOP’s House chief, Rep. Kevin McCarthy, previously said he would have a talk with Greene on Tuesday about some of her controversial actions, which include calling for House Speaker Nancy Pelosi (D-CA) to be executed and harassing fellow freshman lawmaker Rep. Cori Bush (D-MO). She is also a proponent of the Qanon conspiracy theory and vocally backed the January 6 insurrection at the US Capitol by supporters of former US President Donald Trump, which aimed to overturn the results of the November 2020 presidential election.

A meeting by the House Republican Steering Committee Tuesday night about Greene failed to reach a decision on responding to Greene, with one lawmaker telling The Hill the group would likely meet again on Wednesday night.

A separate initiative by Bush seeks to remove Greene from Congress entirely, along with all lawmakers who supported the January 6 putsch. Next week, Trump’s trial for allegedly inciting the attack begins in the Senate.

Omar has long been a target for conservatives, with Trump once accusing the Somali Muslim refugee of supporting al-Qaeda*.

In early 2019, she aroused particular anger after quoting the 1997 Puff Daddy song “All About the Benjamins” in relation to an attempt by McCarthy to punish her and Rep. Rashida Tlaib (D-MI), the only other Muslim in Congress, for accusing Israel of oppressing Palestinian people. Omar later clarified she was specifically referencing the American Israel Public Affairs Committee (AIPAC), which in fact bills itself as “America’s Pro-Israel Lobby.”

Detractors claimed it was anti-Semitic and Trump called for her to be removed from her position on the House Foreign Affairs Subcommittee on Oversight and Investigations. Omar eventually apologized for her wording, but not for the substance of her tweet, and the House subsequently passed a resolution denouncing all forms of hate, including anti-Semitism and Islamophobia.