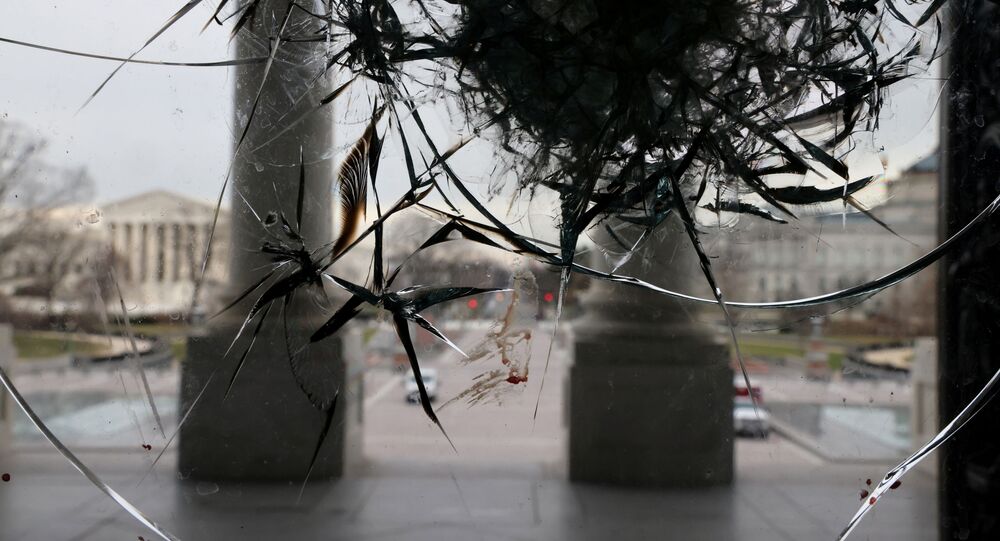 The deadly 6 January attack by Trump supporters on the US Capitol, that disrupted the congressional session certifying election results, is widely considered one of the most shocking occurrences in US politics. The riot resulted in a historic second impeachment for the 45th US president, who was accused of "incitement of insurrection".

The FBI investigation of the 6 January Capitol siege has uncovered evidence pointing to a coordinated action to plan and encourage the violent riot, according to a report released on Saturday by The Washington Post.

The outlet says it has reviewed the FBI report on the attack, including several maps of the US Congress and a compilation of online postings alleged to have been made by Trump supporters in the run up to the Capitol riot. According to the report, one of the maps was headlined "CREATE PERIMETER" and revealed tunnels and routes that connected different parts of the building.

“Be ready to fight. Congress needs to hear glass breaking, doors being kicked in,” one of the postings read, according to the report.

The WaPo said that it particularly reviewed video footage from the Capitol assault, some "exclusive", and compiled clips with a 3D-model and publicly-accessible maps of the building to illustrate how the riot unfolded.

According to the report, FBI agents across the US are working to "unravel the various motives, relationships, goals and actions" of the Trump supporters who stormed the Capitol, particularly to legally distinguish those who gathered for a political rally and those who "played key roles in committing or coordinating the violence."

As part of the FBI report, there are court filings and videos that show a group of men that allegedly include Proud Boys members who appear to "engage in concerted action", gathering "near the West Front of the Capitol just before 1 p.m., near the Peace Monument at First Street NW and Pennsylvania Avenue NW".

Much of the pre-riot discussion of the upcoming violent action, The WaPo said citing FBI investigators, occurred on the website TheDonald.win in which Trump supporters allegedly posted about the forthcoming rally in "graphic terms", with some even dubbing it a "war" rather than a protest or a rally.

"Stop calling this a march, or rally, or a protest. Go there ready for war. We get our President or we die", The WaPo quoted one of the comments cited in the FBI report.

Several people have been indicted as the investigation has linked them to the coordination of the violence. Among them is an Ohio resident, Jessica Marie Watkins, who appeared to have formed her own militia group, according to the report. Watkins joined the Oath Keepers and in early November 2020 began recruiting for what she named an "operation", instructing recruits on how to prepare and rolling out ominous predictions for Joe Biden's inauguration.

“If he is, our way of life as we know it is over. Our Republic would be over. Then it is our duty as Americans to fight, kill and die for our rights.", she allegedly said. " [...] If Biden get the steal, none of us have a chance in my mind. We already have our neck in the noose. They just haven’t kicked the chair yet.”

The report also mentioned two other suspects, also members of the Oath Keepers: Watkins' friend, Donovan Ray Crowl, and US military veteran Thomas E. Caldwell, with the latter texting Watkins that he believed "we will have to get violent to stop this, especially the antifa maggots who are sure to come out en masse even if we get the Prez for 4 more years".

According to The WaPo, Watkins denied committing a crime and described the deadly Capitol riot as a peaceful protest that turned violent.

On Wednesday, US Justice Department said in a release that the three were indicted for conspiring to obstruct Congress.

What Happened in the Capitol?

On 6 January, the US Capitol was attacked by a pro-Trump mob, as rioters ransacked the building while disrupting the congressional session certifying the results of the presidential election.

The assault resulted in the deaths of five people, including a Capitol police officer. The former president, Donald Trump, who, via his now-suspended Twitter account, had been promoting the 6 January protest in Washington DC as "big" and "wild", was impeached for an unprecedented second time over accusations of "incitement of insurrection".

Trump denied any responsibility, insisting that he never wanted violence on US streets, and made several statements calling on his supporters to refrain from violence during Joe Biden's inauguration.

On 20 January, when the Democrat was sworn into office, Trump ignored tradition and skipped the ceremony, leaving the White House for the last time for Palm Beach, Florida. His second impeachment trial in the US Senate, which he calls a "hoax" and a "witch hunt" is set to begin on 9 February.

According to US District Attorney Michael Sherwin, cited by BBC, at least 400 suspects have been identified in connection with the riot, and 135 have been arrested. Among those indicted are two members of Proud Boys: Dominic Pezzola and William Pepe, both residents of New York state, who face charges of conspiracy.