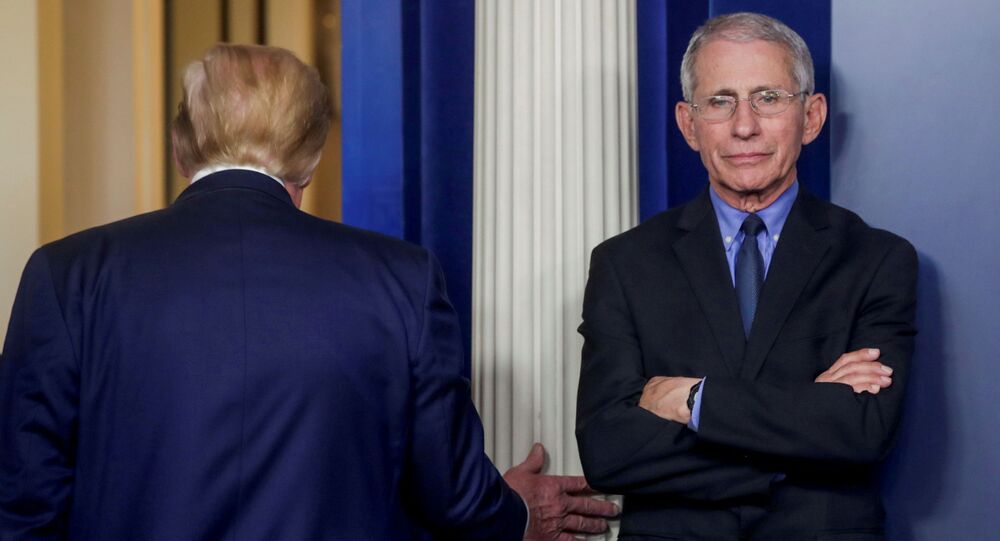 The top medical adviser on COVID-19 issues is now working with now sworn-in US President Joe Biden on the government’s response to the pandemic.

Doctor Anthony Fauci, who was a member of the White House Coronavirus Task Force established in late January 2020, told the New York Times about the period in his career when he worked with Donald Trump and his administration on tackling the coronavirus pandemic.

Fauci is known to have differences with Trump over the country's handling of the pandemic. They have contradicted each other on several occasions, with Donald Trump saying at one point publicly that Fauci "made a lot of mistakes".

Fauci explained that the differences have started to become more and more apparent during the rapid escalation of cases in the New York metropolitan area.

“I would try to express the gravity of the situation, and the response of the president was always leaning toward, ‘Well, it’s not that bad, right?’ And I would say, ‘Yes, it is that bad.’” Fauci said, adding that the president also would take the opinion of people he knew from business “based on no data, just anecdote” seriously.

Fauci said that during his work with the White House Coronavirus Task Force, he “started getting anxious that this was not going in the right direction — the anecdotally driven situations, the minimisation, the president surrounding himself with people saying things that didn’t make any scientific sense”.

“It isn’t like I took any pleasure in contradicting the president of the United States. I have a great deal of respect for the office,” Fauci said.

The doctor also said that Trump’s inner circle was “quite upset” that he would dare publicly contradict the president.

The doctor has often been criticised for his assessment of the COVID-19 outbreak in the US. During a July interview to Fox News, Trump said that Fauci was “a little bit of an alarmist”. He added that the medical adviser had “made some mistakes”, including his initial recommendation against wearing masks at the beginning of the pandemic.

Fauci also commented on the situation with Trump joking about firing him: “I didn’t think at all that he was going to fire me. It was just, you know, Donald Trump being Donald Trump.”

While holding a campaign rally in Florida in November, the crowd started to chant "Fire Fauci", to which Trump responded "Don't tell anybody but let me wait until a little bit after the election", thanking his supporters for the advice. Later, Trump said that he wasn’t firing the nation’s top infectious-diseases doctor. “I like him. He is terrific,” Trump said back then. “Not everybody's happy with Anthony,” Trump said. “Not everybody‘s happy with - everybody,“ he added.