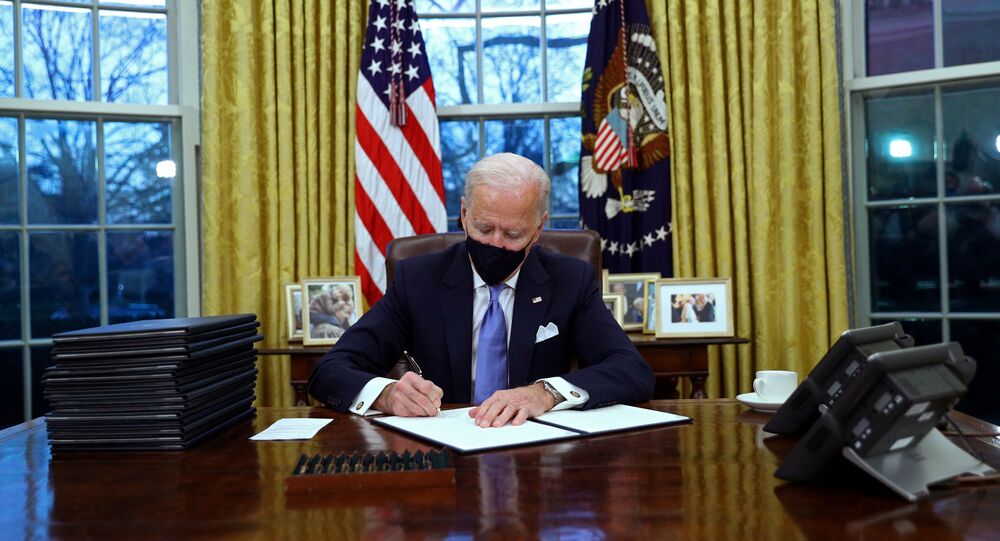 Feminist writers were quick to point out that Joe Biden's executive order on gender identity, issued on the first full day of his presidency, effectively abolishes the minority of academic sports scholarships reserved for women.

US President Joe Biden has thrown hundreds of thousands of college sports scholarships reserved for women open to competition from male-bodied transgender athletes.

An executive order signed by the president on Thursday ordered educational institutions to allow students access to toilets, changing rooms and sports teams based on their self-declared gender identity rather than their biological sex.

“Children should be able to learn without worrying about whether they will be denied access to the restroom, the locker room, or school sports,” Biden wrote in his order.

The order cited a US Supreme Court ruling last year that gender identity should be treated as equivalent to biological sex when applied to anti-discrimination law.

Feminists and women journalists were quick to point out that would mean biologically-male students could compete against girls for athletic scholarships to colleges, of which almost six in ten are already awarded to male athletes. Some challenged the label of "trans-exclusionary radical feminist" (TERF) applied to them by trans rights activists.

"What is to stop a male student, armed with the new order, from claiming the right to try for a spot on a women’s team (and, potentially, an athletic scholarship)?" Braceras asked. "Absolutely nothing."

​And Britain's LGB Alliance, which opposes many aspects of trans rights activism — including branding gay and lesbian people "gender fetishists" if they decline to sleep with transgender people of the opposite physical sex — pledged support for those in the US ready to fight the order.

© Flickr / Governor Tom Wolf
Biden Nominates Trans Woman Doctor Rachel Levine as Assistant Secretary of Health
Biden served as vice president from 2009 to 2017 to president Barack Obama, issued a directive ordering public schools to grant students access to single-sex spaces such as bathrooms and locker rooms based on their gender identity. By contrast, Obama's successor Donald Trump banned transgender people from serving in the armed forces on the basis that their treatment, including hormone replacement therapy and gender reassignment surgery, would be costly.

Some feminists point out that policies allowing men to quickly claim transgender women status and access to women-only spaces — including prisons — on the basis of self-identification alone have led to several documented sexual assaults. In the UK last week, trans woman Michelle Winter was jailed for 15 years for the rape of a woman — a crime defined in English law as violating another's body with one's penis.