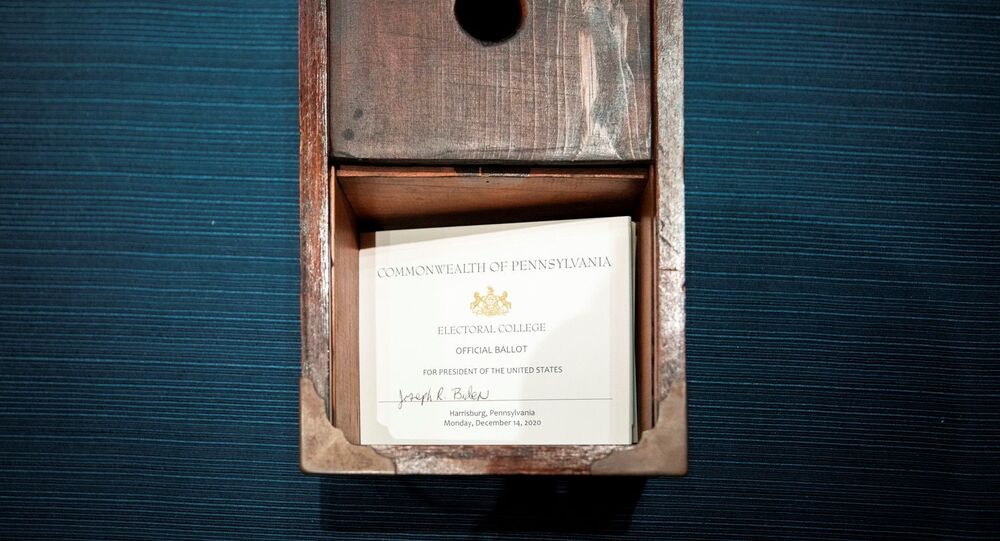 Earlier this month, the Electoral College decisively confirmed that Joe Biden is the next American president, giving him a majority of 306 electoral votes to US President Donald Trump’s 232. However, Trump and his allies have continued to contest the election results by making claims of widespread voter fraud.

In an interview with The Bulwark Podcast, Rep. Adam Kinzinger (R-IL) on Wednesday told host Charlie Sykes that he thinks as many as 100 Republicans could challenge the Electoral College results when Congress meets to count the votes on January 6.

In addition, Kinzinger revealed that he spoke to a lawmaker from a Republican-leaning district who expressed worry about their reelection prospects if they did not come out against the Electoral College results.

"It's like the Texas briefing, right? They knew that it wasn't going anywhere, but it was much easier to just sign your name and be done with it than actually defend it," the Illinois representative said, referring to the fact that earlier this month, Republican Texas Attorney General Ken Paxton filed a lawsuit attempting to block presidential electors in Georgia, Michigan, Pennsylvania and Wisconsin from casting their votes for Biden.

"I'm just over the undermining of democracy and the frankly massive damage that's being done with this," Kinzinger said during the interview.

Sen. Josh Hawley (R-MO) on Wednesday revealed that he would challenge the Electoral College vote early next month.

“I cannot vote to certify the Electoral College results on January 6 without raising the fact that some states, particularly Pennsylvania, failed to follow their own state election laws," Hawley said in a statement.

"And I cannot vote to certify without pointing out the unprecedented effort of mega corporations, including Facebook and Twitter, to interfere in this election, in support of Joe Biden. At the very least, Congress should investigate allegations of voter fraud and adopt measures to secure the integrity of our elections. But Congress has so far failed to act," Hawley added.

Also on Wednesday, Rep. Jefferson Van Drew (R-NJ) revealed he would not vote to certify the Electoral College results.

"I won’t be voting to certify the electors," Van Drew told The Press of Atlantic City. "It's what I’ve talked about all along. There has been ... a disrespect of millions of Americans who really do believe that something's wrong. It's not a matter of who would win or lose — maybe the results would be the same — but we should abide by the rule of law."

Trump called for Republican Georgia Gov. Brian Kemp’s resignation on Wednesday for refusing to agree with the president’s claim that he carried Georgia in the November election. Trump lost by 12,000 votes in the state.

“[Kemp] should resign from office,” tweeted Trump, who has refused to concede his presidential defeat. “He is an obstructionist who refuses to admit that we won Georgia, BIG! Also won the other Swing States.”

Trump and his allies are attempting to overturn the election results on January 6, when a joint session of Congress is set to confirm Biden’s victory according to the procedures established by the Electoral Count Act of 1887, which minimizes the involvement of Congress in electoral disputes.