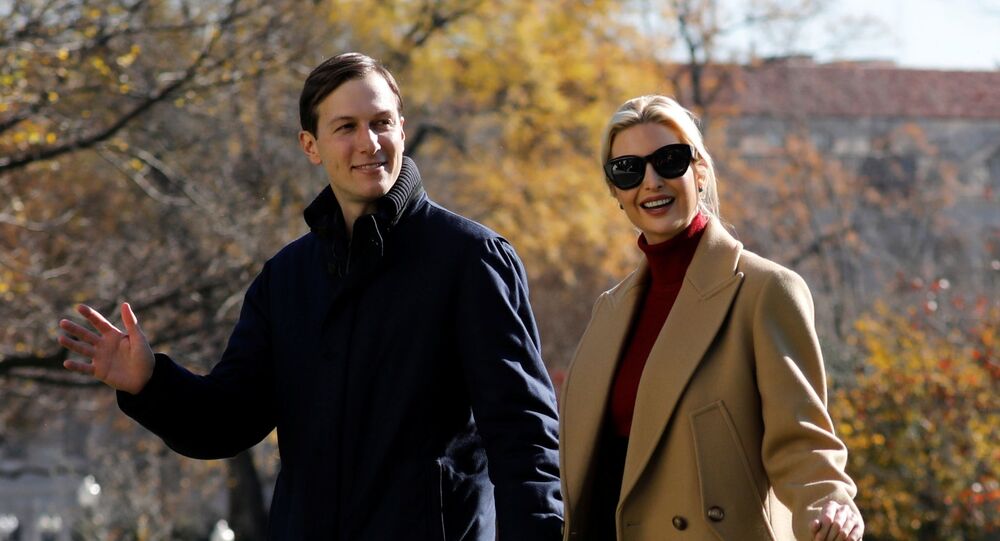 In the early 2000s, Jared Kushner's father, well-known Democratic Party donor Charles Kushner, was sentenced to a maximum two-year term behind bars, given an earlier guilty plea for illegal attempts to put an end to his brother-in-law's cooperation with federal prosecutors.

First Daughter Ivanka and husband Jared Kushner jointly posed for pictures on Christmas Eve, a day after the incumbent president issued a pardon for Kushner's father, real estate tycoon Charles, aged 66, for the extortion of his own brother-in-law with the help of a prostitute.

"Merry Christmas Eve!", Ivanka posted alongside the image taken in the White House. The senior advisers flew to President Trump's Mar-a-Lago resort in Florida the other day to join the first couple for Christmas celebrations there - the last one during President Trump's term.

Ivanka was seen in Miami as early as Tuesday, when she distributed food boxes to local families, while Jared joined Donald and Melania on their Air Force One flight to catch up with Ivanka there on Wednesday.

I think its the only time a president can grant pardons without spending political capital. I don't think they'd risk pardoning anyone controversial if they have to run for reelection. Trump knows his political career is over, thats why he's giving pardons away left and right.

I mean, if a guy hires a prostitute to seduce his brother-in-law, and videotapes it, and then sends the videotape to his sister to attempt to intimidate her from testifying before a grand jury, do I really need any more justification than that?

Some took the news as a fresh chance to take aim at President Trump:

Another clear example of Trump's immoral, unethical and criminal behavior. Karma is piling up like it has never before. Justice will get him down. No mercy.

When he said he would clean up the swamp, I didn't figure he meant he would do that by simply pardoning all the swamp dwellers.

In comparison with his son, who has been in the orbit of the Republican Party, the elder Kushner used to be one of the Democratic Party's top fundraisers, primarily under President Bill Clinton.

In 2001, he became the most prominent campaign contributor in New Jersey Governor James McGreeve's bid for office, propelling him to the post and in turn assuming the role of chairman of the Port Authority of New York and New Jersey. Federal prosecutors later kicked off a probe into his allegedly illegal campaign injections.

© AP Photo / Alex Brandon
Why May Javanka Be Heading for Florida's Billionaire Bunker?

When Kushner learned that his brother-in-law and former business partner William Schulder was cooperating with the authorities, he launched a massive campaign to stop him and his family from doing so.

In particular, he was found to have paid a sex worker $10,000 to seduce Schulder at a New Jersey restaurant, with the illicit encounter filmed on a hidden camera and the tape sent anonymously to Schulder's wife, Kushner's own sister Esther. The plot eventually failed and Kushner ended up facing an additional charge of witness tampering.

The real estate mogul pleaded guilty to 18 charges, including tax evasion and witness tampering. In 2005, he was handed a two-year prison sentence, despite then-US Attorney Chris Christie seeking a longer term. Kushner subsequently served 14 months in an Alabama low-security prison.

On Thursday, footage resurfaced of Christie once dubbing Charles Kushner's case as one of the "most loathsome, disgusting crimes I ever prosecuted".

Jared lamented his father's sentence, speaking in 2018 about the challenges it had caused him personally:

"When you're on the other side of the system, you feel so helpless", Kushner was cited as saying.

"I felt like, I was on this side of the system, so how can I try to do whatever I can do to try to be helpful to the people who are going through it [and deserve a second chance]".

In 2009, the year he married Ivanka, he also defended his dad over the sex tape despite them being on different sides of the political aisle.

"His siblings stole every piece of paper from his office, and they took it to the government. Siblings that he literally made wealthy for doing nothing. He gave them interests in the business for nothing", he told New York Magazine at the time, further asserting it was more of a tit-for-tat measure:

"All he did was put the tape together and send it. Was it the right thing to do? At the end of the day, it was a function of saying, 'You're trying to make my life miserable? Well, I'm doing the same'".