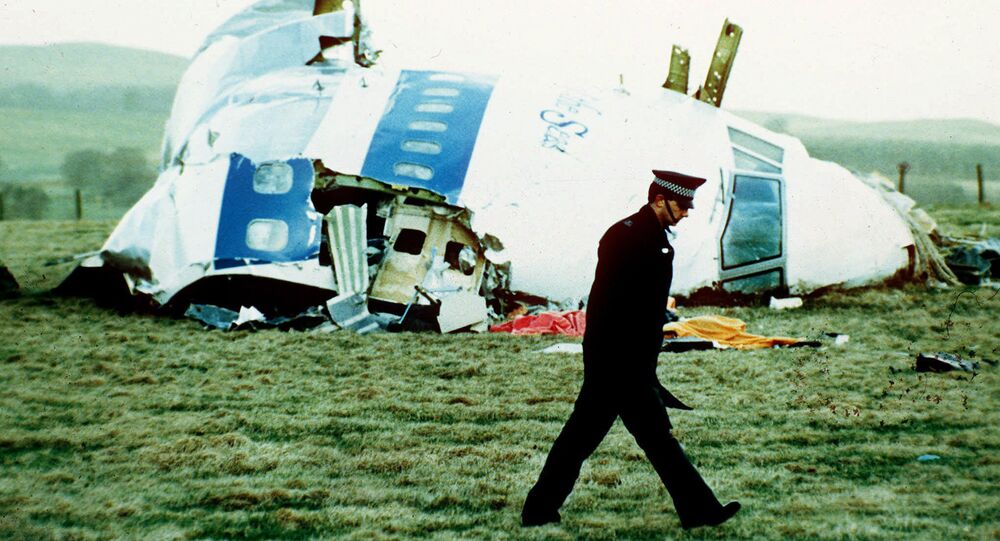 The December 1988 bombing of Pan Am Flight 103 killed 270 individuals, including 190 Americans, when a device planted inside a cassette player exploded and saw the Boeing 727 disintegrate over Lockerbie, Scotland, less than an hour after takeoff from London’s Heathrow Airport. This coming Monday marks the 32nd anniversary of the incident.

Prosecutors with the US Department of Justice are expected to unseal charges in the coming days against a suspect they believed played a pivotal role in the 1988 bombing, according to sources familiar with the development.

Citing senior department officials, the Wall Street Journal reported Wednesday that the individual to be charged is alleged bomb expert Abu Agila Mohammad Masud, who prosecutors claim constructed the bomb and placed it inside the suitcase that was stowed on the Pan Am flight.

© AP Photo / Martin Cleaver
Pan Am crash. Trail of Disaster - Agreat gouge of earth and the wrecked houses of the village of Lockerbie Thursday, January 28, 1988, show the path of the crashing Pan Am Boeing 747 airliner. The jetliner crashed Wednesday night, killing all 258 poeple on board, and an unknown number on the ground.

Masud is said to be in the custody of Libyan officials; however, it’s unclear if any extradition requests have been officially issued. His last known location was a Libyan prison, where he was serving time for unrelated offenses.

The case was filed in the US attorney’s office in Washington, DC, and is reportedly based on confessions Masud allegedly gave to Libyan officials in 2012 that were later turned over to Scottish authorities in 2017, along with Masud’s travel records.

According to the New York Times, the case was also fueled by discoveries made by journalist Ken Dornstein, whose brother was aboard Flight 103. Dornstein launched his own investigation into the bombing and eventually reached out to the FBI in 2012 with a new lead on a potential suspect: Masud. Dornstein described Masud to the Times as a ghostly figure, as the Libyan government had denied his existence for years despite the fact that his name had previously emerged during trials related to the bombing.

© AP Photo / Steven Senne
Ken Dornstein speaks during an interview Thursday, Oct. 15, 2015, in Boston. A long investigation by Dornstein, a documentary filmmaker whose brother died in the attack, identified Libyan Abu Agila Mas'ud as the possible maker of the bomb that shattered the New York-bound Boeing 747 as it flew over Lockerbie, Scotland on Dec. 21, 1988. All 259 people aboard the plane and 11 on the ground were killed.

Dornstein later discovered that Masud had also been allegedly involved in the 1986 disco bombing in West Berlin that killed two American soldiers.

To date, former Libyan intelligence official Abdel Basset al-Megrahi has been the only person convicted for the bombing; the second suspect, Al-Amin Khalifa Fhimah, was acquitted.

Megrahi was convicted in 2001 and given a life sentence in prison, but was ultimately handed a compassionate release after he was diagnosed with cancer. He died in 2012, and his family has recently taken up efforts to appeal his conviction in Scotland.

After Megrahi and Fhimah were indicted, trials for the pair were stalled for several years after Libya refused to extradite its two nationals. It wasn’t until 1999, after years of stiff economic sanctions imposed by the United Nations and the US, that Libya relented and agreed to have the men stand trial in the Netherlands before Scottish judges. The sanctions were lifted after Libya agreed to a $2.7 billion compensation deal for the victims’ families.

Incidentally, the case may also prove to be of personal significance for US Attorney General Bill Barr, who served in the same role when the 1988 bombing occurred. At the time, Barr vowed that the investigation would continue, and that everyone responsible for the attack would be brought to justice. More recently, during a 2019 memorial service at Arlington National Cemetery, Barr referred to the case as “unfinished business.”

Former special counsel Robert Mueller was also a familiar face in the initial investigation into the bombing. He served as the head of the Justice Department’s criminal division during the proceedings.