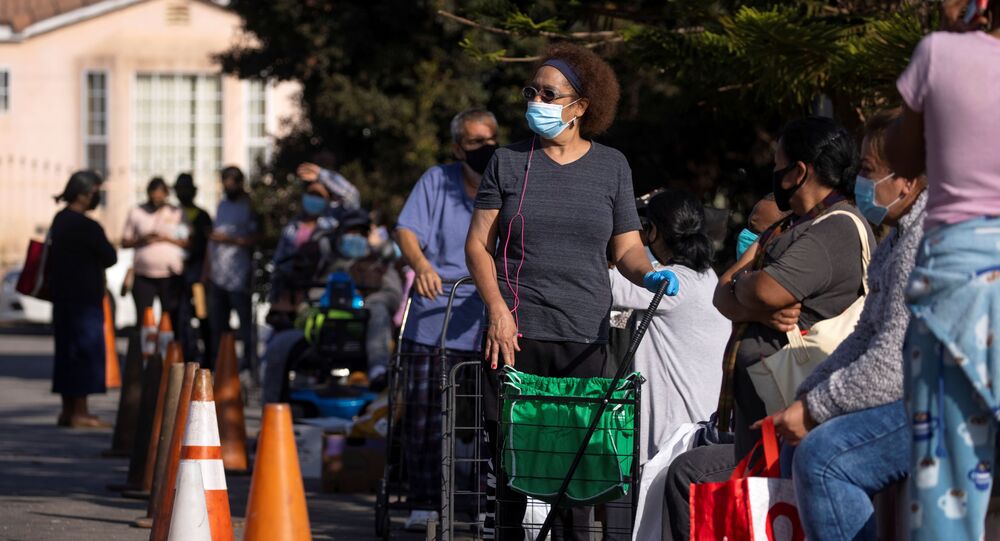 Debates in Congress over a new COVID-19 relief bill have dragged on for months, even as new coronavirus cases have hit record highs. A slew of federal programs designed to alleviate the economic impacts of pandemic shutdowns will expire in weeks, setting the stage for a series of crises that could leave millions more in the US hungry and homeless.

As the COVID-19 pandemic and its associated economic crisis continues, several trends in the US are converging on a new and unprecedented social crisis. By the end of the year, one in six Americans is likely to be facing hunger, as food pantries run dry and federal unemployment benefits are set to expire. Meanwhile, the stock market is posting record gains and the White House is boasting of an economic recovery.

According to a recent report by Feeding America, the United States’ largest hunger relief organization, one in six Americans, or 50 million people, could be facing hunger by the end of 2020. For children, that number is even higher: one in four, or 25%. Those are significant increases from 2018, when there were 37 million hungry people in America, or one person in nine.

However, the statistics don’t tell the whole picture, as across the country, food banks are drying up quickly, and some communities are hit much harder than others.

On Tuesday, Arizona State University’s College of Health Solutions published the results of a survey done in conjunction with the National Food Access and COVID Research Team (FACT). The researchers found that out of 600 Arizona households surveyed over the summer, almost one in three (32%) was experiencing food insecurity and that this number was higher among Latino households. One household in eight had obtained food via credit, food banks, or the charity of friends since the pandemic began.

Elsewhere, racial disparities are just as prevalent. Nationwide, of the top 25 counties with the highest projected food insecurity rates, just four were majority-white - all of them in Kentucky, National Geographic reported.

Further, of the 105 counties with Black majorities, 80% are projected to be food insecure in 2020. For the 28 counties with Native American and Alaska Native majorities, that number is 75%; for the 104 Hispanic or Latino-majority counties, 27% are expected to experience hunger; and of the 2,773 non-hispanic white-majority counties, 15% are expected to be food insecure.

In Queens, New York, dubbed the “epicenter” of the COVID-19 outbreak in the US during the spring, the large immigrant community is buckling under the pressure. National Geographic reported on Tuesday that across New York, social service organizations have reported 75% of their immigrant clients have lost jobs, and since many are not eligible for what federal support exists or fear the impact on their immigration cases if they do participate, many have turned to local food pantries to make ends meet.

However, those food banks are quickly running out.

In Dallas last month, the grim spectacle of thousands of cars lined up to receive food giveaway packages made international headlines. Organizers with the North Texas Food Bank reported giving away enough food to feed 25,000 people on November 15 alone, telling local media it was their largest event ever.

“People are seeing hunger like they’ve never seen it before,” NTFB president Trisha Cunningham told NatGeo. “Food banks were designed to be supplemental - to fill the gaps. There are so many more gaps in our community right now.”

​In Denver, Colorado, food pantries have reported increases in demand of 200% to 300%, and in Pittsburgh, Pennsylvania, demands have similarly doubled.

“We have almost quadrupled our tonnage in this pandemic and it’s only scratching part of the need we have right now,” Leah Lizarondo of Pittsburgh’s 412 Food Rescue told CBS.

The Gund Institute at the University of Vermont found that half of Vermonters have lost jobs or suffered a cutback in hours over the last six months, and one in four Vermonters is food insecure.

In a November 24 op-ed, the editors of the Baltimore Sun noted that one quarter of Maryland’s 6 million residents were believed to be food insecure, but since March 2020, that number could be as high as 42%, or 2.5 million Marylanders, and Maryland Food Bank’s distribution this past fall has doubled from previous years.

“Such a sharp increase has no parallel in modern history,” the Sun wrote. “And that war against hunger is being waged at a time when troop strength is down - older volunteers are understandably reluctant to work in close quarters and risk exposure to the virus. Nonprofits have had to get creative to supplement their manpower.”

Steve Shelley, the CEO of Florida-based food bank Farm Share, told NBC on Tuesday that they had received what seemed likely to be their final Farmers to Families food box shipment.

© REUTERS / KEVIN MOHATT
A staff member at Food Bank of the Rockies stocks boxes of food in their warehouse to be distributed to people in need ahead of Thanksgiving in Denver, Colorado, U.S., November 25, 2020.

“Next week may be the last week that we receive any food under that program, unless it is renewed by Congress or the US Department of Agriculture,” Shelly said. The program began on April 17 at the direction of US President Donald Trump, who set aside $19 billion to buy farm produce and distribute it to American families in need. According to the USDA, by the end of October, 110 million boxes had been delivered.

“We still have other sources of food, but I will say the Farmers to Families Food Box program has been one of the greatest stopgaps,” said Shelley.

Farmers to Families is just one of a slew of federal benefits programs set to expire at the end of the year, without an end to the pandemic in sight and with congressional negotiations over a new relief bill deadlocked.

CNBC reported last week that 14 million American workers would lose their unemployment benefits if they were not extended, and that payment deferments for 42 million Americans’ student loans will similarly end.

Yahoo Finance reported Wednesday that for the week ending November 28, the US Department of Labor reported 778,000 new jobless claims, compared to 775,000 from the week prior, and that for the week ending on November 21, 5.8 million had made continuing unemployment claims compared to 6.71 million the week before. The DoL data will be formally published on Thursday. However, Yahoo notes the data is artificially low because more people are simply stopping looking for work, especially as new lockdowns amid rising COVID-19 cases have caused fresh workforce cuts.

A ban on evictions during the pandemic will also expire on December 31, if not extended. Estimates for how many Americans could face eviction range from 19 million to close to 40 million over the next several months.

Meanwhile, the US stock market sees major gains, with the New York Post noting “Wall Street’s persistent optimism about the course of the coronavirus pandemic.”

In November, the Dow Jones posted its best monthly gain since 1987, an 11.9% increase, and the S&P 500 and Nasdaq closed at record highs, thanks to positive reported progress on several COVID-19 vaccines.