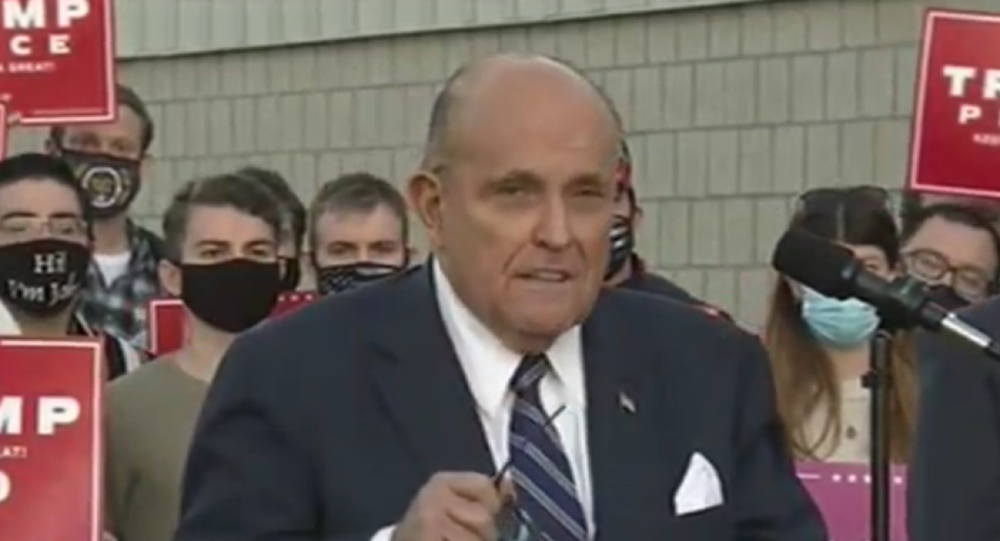 US President Donald Trump's legal team has named a retired US Navy admiral as the link between Joe Biden and the software for controversial e-voting machines.

Trump’s attorneys Rudy Giuliani and Sidney Powell alleged Smartmatic - whose chairman of the board, retired Admiral Peter Neffenger, is part of Joe Biden’s transition team - was at the heart of the vote-rigging in the November 3 election.

Smartmatic's holding company is chaired by an associate of influential Hungarian-born billionaire George Soros. Neffenger is also a member of a think-tank that recently received funding from the Ukrainian firm that employed Biden's son.

Giuliani told Fox News' Mornings with Maria on Sunday that Smartmatic supplied the software for the Dominion Voting Systems machines that 'glitched' and transferred 6,000 votes cast for Trump to Democratic candidate Biden in one rural Michigan county alone.

Powell pointed out to host Maria Bartiromo that Neffenger is president of Smartmatic and also sits on its board of directors.

"It just so happens he's on Mr Biden's presidential transition team - which is going to be non-existent, because we're fixing to overturn the results of the election in multiple states," Powell said. "President Trump won by not just hundreds of thousands of votes, but by millions of votes that were shifted by this software that was designed expressly for that purpose."

"We have sworn witness testimony of why the software was designed. It was designed to rig elections," she added. The witness "was fully briefed on it, he saw it happen in other countries, it was exported internationally for profit by the people who are behind Smartmatic and Dominion."

"They did this on purpose. It was calculated. They've done it before," Powell said. "We have evidence from 2016 in California. We have so much evidence, I feel like it's coming in through a fire hose."

Powell also claimed Smartmatic paid "kickbacks" to public servants in return for lucrative state contracts. She said several whistle-blowers had come forward to say "substantial sums of money were given to family members of state officials" who bought the software.

Dominion machines were used in 28 states, including the six key battlegrounds of Arizona, Georgia, Michigan, Nevada, Pennsylvania and Wisconsin.

"We're talking hundred-million dollar packages for new voting machines, suddenly, in multiple states," Powell said. The "benefits" to officials ranged from cash to "what I would call election insurance, because they know they can win the election if they are using that software."

Powell said she was "livid" that successive governments had failed to act on many complaints about the hardware and software - including from senior Democrats Carolyn Maloney, Elizabeth Warren and Amy Klobuchar.

"Which makes me wonder how much the CIA has used it for its own benefit in different places," Powell said. She added that it was incomprehensible that Central Intelligence Agency Director Gina Haspel was still in her post, asserting: "She should be fired immediately."

Bartiromo quoted a "senior intelligence official" as saying Smartmatic's software has a "back door" that allows it to be "mirrored and monitored" to give an "intervening party a real-time understanding of how many votes will be needed to gain an electoral advantage."

"I can prove that they did it in Michigan, I can prove it with witnesses," Giuliani said. "We're investigating the rest. In every one of those states though, we have more than enough illegal ballots, already documented, to overturn the result in that state."

"Yes there is a back door, and we actually have proof of some of the connections to it," Giuliani said. "Right now our cases are most developed in Pennsylvania and Michigan."

Asked if he needed the Dominion hardware or Smartmatic software to prove his case, Giuliani said he had witnesses who "can describe the hardware in great detail," along with government employees and others who "were there at the creation of Smartmatic. They can describe it, they can draw it, they can show it."

"Beyond this election, this whole thing has to be examined as a national security matter," Giuliani stressed. "The governors who gave contracts to this company never bothered to do any due diligence."

"I can't imagine you would give a contract to a company if you went one step further and found out it's really being run by people that are close to [Nicolas] Maduro and [Hugo] Chávez" - the current and former Socialist presidents of Venezuela."
Neffenger was made a 'distinguished fellow' at the Atlantic Council think tank after he left the US government in 2017. In 2019, the Wall Street Journal reported that Ukrainian energy firm Burisma Holdings, which employed Biden's son Hunter in controversial circumstances, donated $100,000 a year to the council from 2016 to 2018.
© AP Photo / Ronald Zak
Philanthropist George Soros Funds Reportedly Sway District Attorney Races to Reshape Law Enforcement
Smartmatic’s founder and CEO is Venezuelan Antonio Mugica, while Britain’s Lord Mark Malloch-Brown – a long-standing associate of Soros – is the chairman of Smartmatic's London-based holding company SGO Corporation Limited.

Smartmatic equipment was used in the 2017 elections to the Venezuelan National Constituent Assembly, after which Mugica turned against Maduro - contrary to Giuliani's claim that the two are in cahoots.

Mugica admitted his software could be hacked to rig an election when he told a press conference in London that Maduro's government had inflated the turnout by around a million. But he revealed he had failed to inform the proper authorities in Venezuela before his press conference, claiming “I guess we probably thought that the authorities would not be sympathetic to what we had to say.”

Malloch Brown was a junior minister from 2007 to 2009 in former British PM Gordon Brown's short-lived government and has several links to Soros. He was a member of the billionaire's advisory committee on Bosnia from 1993-94. In 2002, while working as an administrator for the United Nations Development Fund, he suggested the agency work with Soros' Open Society Institute. In May 2007, he was hired as vice-president of Soros’s Quantum Fund but quit four months later to join the UK government.

Open Society Institute legal counsel Kenneth Anderson has also been a council member of the Human Rights Foundation - whose founder and president Thor Halvorssen is the cousin of fugitive Venezuelan opposition leader Leopoldo Lopez. Lopez was jailed in 2015 for inciting violence in the deadly 2014 Guarimba riots aimed at overthrowing Maduro's government.

Stop the Steal: Trump Supporters Call for Vote Recounts as They Rally Across US