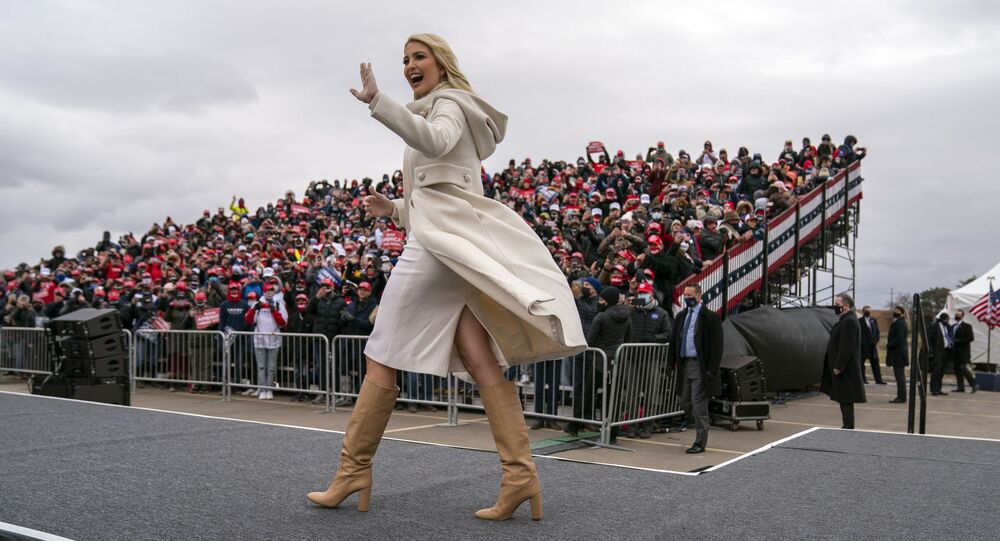 With Trumpism Set to Become a Lasting Political Philosophy, Will Ivanka Run for President in 2024?

Two Republican senators - Mitt Romney and Lisa Murkowski - and former President George W. Biden have congratulated Joe Biden on winning the election. But President Trump has not conceded and has pledged to challenge the result in Pennsylvania and several other states.

Donald Trump is insisting he won last week’s US presidential election but even if he is forced to leave the White House in January there is no doubt Trumpism will live on within the Republican Party.

Republican political pundit Sophia A. Nelson said last week: "The Trump movement is real. And it's here to stay."

​Snide claims by Democrats that Trump’s supporters were just racist rednecks were undermined by the level of support he got across the country.

More than 70 million people voted for the 74-year-old business tycoon, the second highest total for a candidate in US political history.

Trump saw a rise in support from Latino voters in Florida, Georgia, and North Carolina and he even won Zapata County in Texas, which had not voted for a Republican candidate in a century.

He also got votes from black Americans - all be it only eight percent, but that was two points higher than in 2016 - and from former Democrats on both coasts and across the Midwest.

​His simple message, and especially his aggressive stance towards China over trade, clearly proved popular with millions of voters.

Jim Worthington, the founder of People4Trump, told AFP: "His supporters love him. They love him for this fact that he keeps America first and Americans first. They realise that he's fighting for them. We broadened our coalition.”

Trump’s stance on the coronavirus pandemic - which was greeted with horror in California, New York and many other blue states - was also popular. Although 233,000 Americans have died, most Trump supporters thought he succeeded in keeping the economy going and were deeply sceptical about lockdowns and even masks.

​The question now is who will the Republican Party put forward as its candidate in 2024?

Trump would be 78 by the time of the next election but Joe Biden has shown this year that age is no longer a campaign obstacle.

But the Financial Times pointed out last month that Mr Trump is heavily indebted - he owes more than US$ 1 billion to various creditors and around $900 million of that debt is due before the end of 2024.

Forbes has estimated his net worth at $2.5 billion, so he may not be about to go bust but he could be busy trying to prop up the Trump Corporation in the next few years, as it struggles to recover from the battering taken from the coronavirus pandemic.

​So it could be that his daughter, Ivanka Trump, would be put forward as the person to keep the Trumpist themes - fervent nationalism, hostility to immigrants, distrust of the media and the liberal “deep state” - alive.

Currently Ivanka, 39, is a presidential adviser who reportedly focuses on “the education and economic empowerment of women and their families as well as job creation and economic growth through workforce development, skills training and entrepreneurship.”

​She has three children and her husband, Jared Kushner, is a Harvard-educated real estate developer who was at the heart of the Abraham Accords, the US-inspired normalisation of relations between Israel and the United Arab Emirates.

Ivanka Trump is hugely popular with Trump supporters and would make a telegenic candidate. Although she has very little political experience or foreign relations expertise, that was clearly not a hindrance for her father.

But the Trump political brand was deeply tied to Donald himself and the magic may not transfer to a relative like it did with the Kennedys or Bushes in the US, India’s Nehru/Gandhi dynasty or the Bhutto family in Pakistan.

Mr Worthington said he saw Ivanka as the “heir apparent” and added: "She is just a very impressive person.”

But David Hopkins, an associate professor of political science at Boston College, said: "It's clear that part of Trump's appeal is his own personality, which might not be able to transfer to other figures once he himself is gone from the scene."