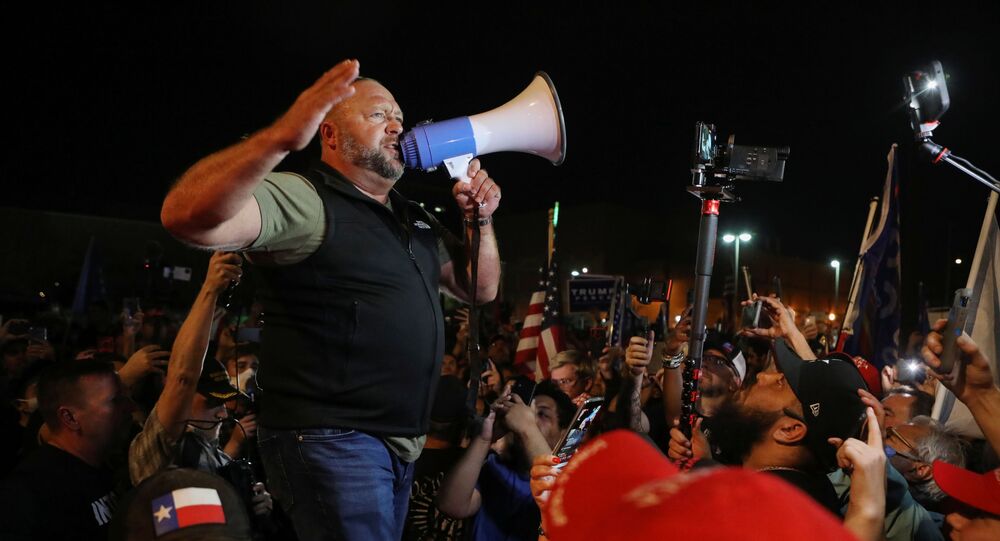 Jones, a right-wing radio host, political commentator and conspiracy theorist whose content was scrubbed from nearly all major online platforms in 2018, has enjoyed a resurgence of mainstream visibility recently, appearing on the Joe Rogan podcast with comedian Tim Dillon, which attracted more than 12.5 million views in 10 days.

© AP Photo / Jose Luis Magana
FDA Threatens Alex Jones With Legal Actions Over 'Misleading' Claims on Products to Treat COVID-19
Jones, 46, is arguably America’s most prominent conspiracy theorist, with his Infowars website receiving more than 10 million monthly visits. Jones gained notoriety for calling the 9/11 terror attacks an “inside job” plotted and carried out by the US government. He also believes that the Pentagon created a chemical “gay bomb” to change people’s sexual orientation, and has accused former Special Counsel Robert Mueller of being a paedophile. His 2017 claims that the 2012 shooting at Sandy Hook Elementary School was a “completely fake”, staged hoax led to multiple lawsuits, forcing him to retract his statements and to say he believed the massacre “really happened”.