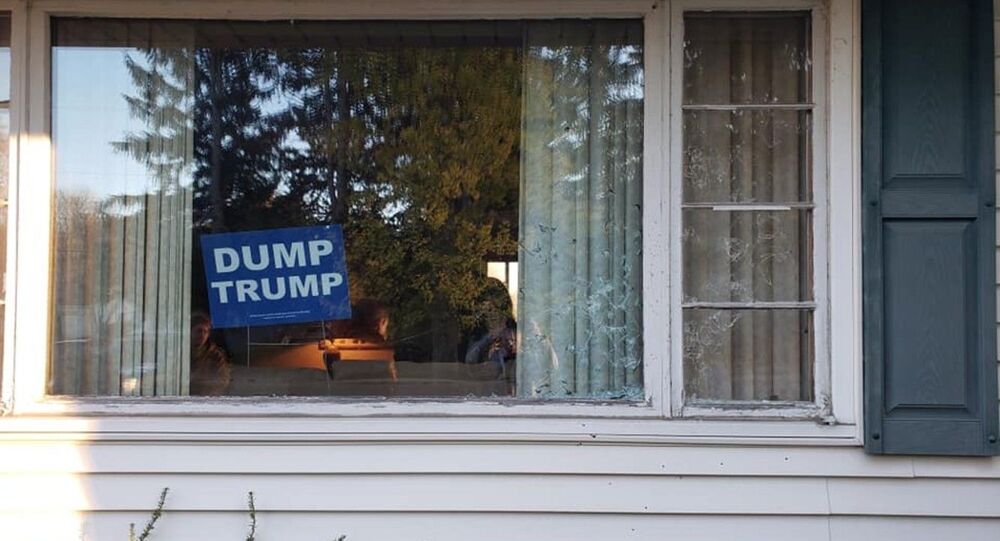 Ohio authorities are on the hunt for at least two suspects who reportedly fired several shots at and into a home shortly after stealing a “Dump Trump” campaign sign.

Cops with Ohio’s Summit County Sheriff’s Office responded Wednesday to a homeowner in the city of Green who reported their front window and house siding had been damaged by gunfire.

The local resident told cops that an “unknown suspect” trespassed on his yard and stole a “Dump Trump” sign Wednesday morning - hours after US election polls had closed, police detailed in a Wednesday news release.

Soon after, a second suspect took aim and fired at a second “Dump Trump” sign that was hanging in the front window of the home. No one inside the home was injured.

“The Sheriff’s Office recovered two shotgun casings near the residence,” the release noted.

A surveillance image provided by the homeowner shows what appears to be a barefoot individual trespassing in the yard.

The Green resident claims that he has recently received a number of unsolicited brochures in his mailbox supporting US President Donald Trump. He has also been receiving photos of his “Dump Trump” sign.

“We have provided photos that may help in identifying the culprits. If anyone has information regarding this incident, please call the Summit County Sheriff’s Office Detective Bureau at 330-643-8637,” Summit County authorities requested.

This news comes amid continued uncertainty surrounding the results of the US presidential election between Trump and Democratic challenger Joe Biden. In recent weeks, numerous stories of campaign sign-related violence and vandalism have made headlines.

The New York Times reported Sunday that a Volusia County, Florida, resident punched his neighbor in the face after alleging that the neighbor’s pro-Biden sign was blocking his pro-Trump sign.