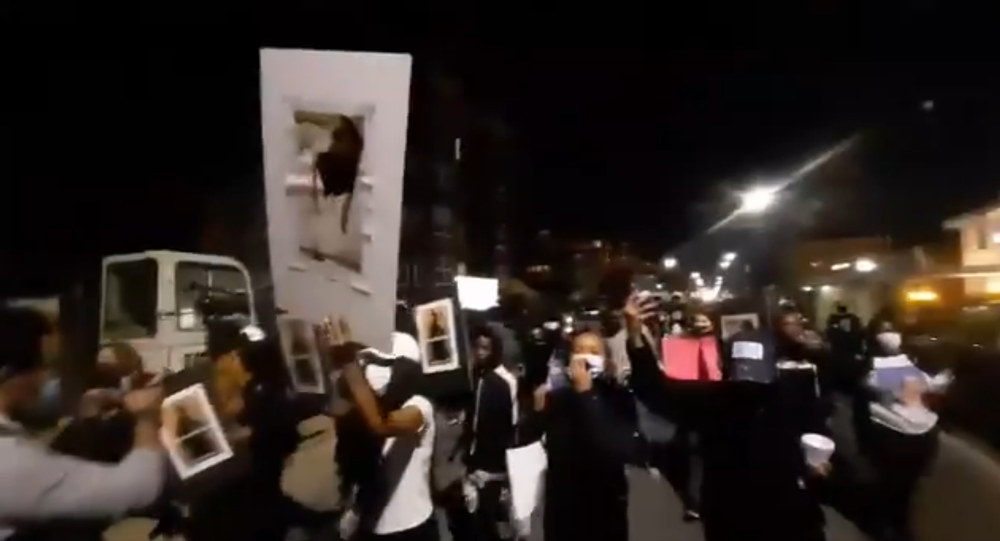 Demonstrators demanding justice for 20-year-old Karon Hylton have taken to the streets of Washington, DC, for the second night in a row following the young man's death on Monday.

Protesters were overheard chanting "Justice for Karon" and similar calls for action as they approached the Metropolitan Police Department's (MPD) 4th District Station.

Authorities were seen brandishing pepper-spray canisters while demonstrators pleaded for police to release the body camera footage that documented the moments leading up to Hylton's fatal crash.

The continued protests in DC follow a Friday night crash involving a Revel electric moped operated by Hylton and a vehicle in traveling on Kennedy Street in Northwest DC's Brightwood Park neighborhood.

Citing the MPD, NBC Washington reported officers attempted to stop Hylton around 10:10 p.m. local time on October 23 after they saw him operating the scooter without a helmet. He then went down an alley and "collided" with a vehicle near the 700 block of Kennedy Street.

Police say they administered first aid treatment to the 20-year-old until emergency medical responders made it to the scene. He died in the hospital days later.

"It just amazes me that the cops’ story is that they were chasing him for not wearing a helmet, yet they put his life in danger and he died as a result," Daniel Hale, a bystander who saw part of the MPD pursuit, said to WJLA.

Karon Hylton was a DC Native and a new father to a 3 month old baby girl, he was riding a registered motorcycle and was struck from the back by @DCPoliceDept. Not only was there a previous pattern of harassment inflicted on Karon by MPD, but they also pulled the plug on his life. pic.twitter.com/lNeKLP7o9z

Wednesday's demonstrations began with a vigil in remembrance of the 20-year-old, who died the same day his daughter turned 3 months old.

​Hylton's mother, who was attacked Tuesday by officers with pepper spray, was one of many seen covering an MPD cruiser with images of her late son.

Mother, family & friends of #KaronHylton cover windows of police car with pictures of Karon for Officer to see. #DCProtests pic.twitter.com/tyN4jXnypi

Demonstrators continued marching in Northwest DC until they reached the 4th District Station.

DC cops are sprinting around the building as they rush to suppress protesters for demanding justice #KaronHylton outside the 4th District precinct pic.twitter.com/Zrk10o8Fkl

The MPD announced earlier Wednesday that the body camera footage from the incident will be released, although no exact date was mentioned.

Reports yet to be confirmed by authorities have alleged the cop who escalated the incident was MPD Officer Terrance Sutton.

sutton has a history of harassment and violence on the job. he is a power hungry aggressor.

he murdered a 20 year old father to a 3 month old babygirl.

now, like the coward he is, officer sutton is hiding while his colleagues mace Karon's mother for demanding to speak to him.

“Officer Terrance Sutton, a.k.a. Tattoo, and the D.C. Metropolitan Police Department must be held accountable for the murder of Karon Hylton. The Hylton family deserves justice, although there’s no justice that can bring Karon back,” argued Sharece Crawford, at large committeewoman for the DC Black Caucus.

‘Treated Like Criminals’: US Troops in Germany Slam Leadership Amid Mounting Tax-Liability Cases