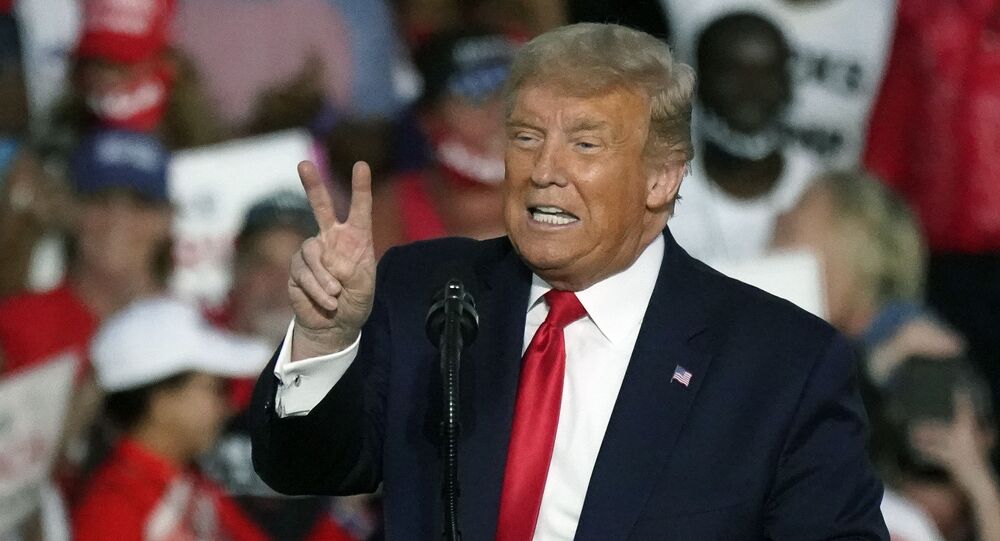 According to Forbes magazine, more than 50 million Americans have already voted in the presidential election in the United States, as authorities have adjusted the electoral system due to the ongoing coronavirus pandemic. Many Americans have voted by mail, a measure that Donald Trump has harshly criticised, saying it may result in voter fraud.

The Trump campaign has filed a lawsuit in Nevada asking a state court to prohibit officials in Clark County from tallying early votes. According to court documents, the plaintiff accuses the county officials of restricting election observers in a way that prevents them from meaningfully examining the voting process.

"It is troubling that those trusted to run our elections are going to have to be compelled by the court to follow state law and protect this election. We join President Trump in his fight for transparency and accountability in Nevada's election system", said Michael McDonald, chair of the Nevada Republican Party, commenting on the lawsuit.

The development comes following months of complaints from Republicans about the election procedures in Nevada. In a letter sent earlier this week to Nevada's Secretary of State Barbara Cegavske, the Trump campaign wrote that officials in Nevada’s most Democrat-leaning county are prohibiting observers from entering areas where ballots are handed to voters and later counted. The Trump campaign also complained that local officials had rejected its offer to pay for cameras that would be installed in the voting facilities.

The plaintiff in the lawsuit drew attention to the fact that County Registrar of Voters Joe Gloria has changed the Agilis Ballot Packing Sorting System’s tolerance level for detecting improper signatures, thereby increasing the likelihood of "fraudulent and improper ballots being tabulated by Clark County".

How have Democrats responded?

The Democrats have called the Republicans' complaints "misleading" and "inaccurate". Clark County spokesperson Dan Kulin said local authorities had gone "above and beyond to provide access to observers". He emphasised that the Republicans' request for observers to be granted access to certain areas in polling locations would violate voters' privacy and that the request to install cameras is "likely not permitted by" law.

"This lawsuit from Trump and Republicans is nothing more than an obvious attempt to impede record-breaking momentum in Clark County, the most diverse county in the state. The demands articulated in the GOP’s lawsuit amount to voter suppression, plain and simple", said Nevada's Democratic Party Chair William McCurdy.

Commenting on the Trump campaign’s decision to file a lawsuit in Nevada, William Stroock, author and political analyst, said the Republicans are trying to prevent Democrats from committing voter fraud.

"For decades the Democrats have suspiciously run up the vote total in elections too close to call on election. In these cases, Democrats inevitably win. The GOP is working hard to prevent Democrat voter fraud this year", Stroock told Sputnik.

Due to the severe coronavirus situation in the United States, millions of Americans have been allowed to cast their ballots ahead of Election Day, scheduled for 3 November. An estimated 80 million Americans will vote by mail in the election. Donald Trump has previously criticised the measure, saying it may result in a voter fraud, with foreign powers potentially influencing the election. He also cited delays in postal deliveries, warning that it could take "months" or even "years" before the country knows the results of the vote.