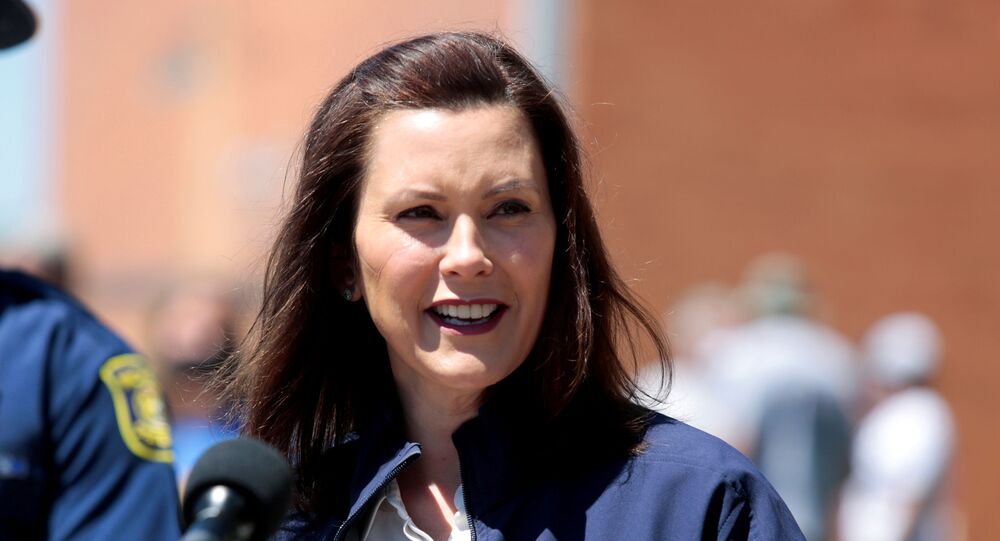 The purported plotters were said to have been disgruntled by the Democratic governor allegedly having "uncontrolled power" and wanted to put an "end" to it.

The FBI has revealed in a federal affidavit that it has thwarted an attempt plotted by six people to overthrow Michigan’s government involving the kidnapping of the state’s Democratic Governor Gretchen Whitmer. According to an FBI agent, the plotters wanted to kidnap Whitmer at her vacation home and then put her on "trial" at a remote location sometime before the 3 November election.

The federal filing claims that the plot involved reaching out to the local Michigan militia and that the six people who have been arrested and charged in the case were seeking to recruit more followers for their cause. The plotters also carried out surveillance on the governor's vacation home, located in northern Michigan.

Michigan’s attorney general Dana Nessel later revealed that seven members of the "Wolverine Watchmen" militia group, which was contacted by the plotters, have been taken in custody. They are suspected of targeting state law enforcement, conspiring to kidnap Governor Whitmer, planning an attack on the state capitol building, and trying to "instigate a civil war", the attorney general said.

The people involved in the alleged kidnapping plot believed that Whitmer, who introduced strict lockdown measures in her state during the first wave of the outbreak, "has no checks and balances at all", the FBI documents say. They also reportedly believed that the governor "has uncontrolled power right now" and that such a situation "must come to an end".

The plotters believed that Whitmer and the Michigan government were violating the US Constitution by their actions, the FBI claims. They first started gathering early in 2020 and were discussing a variety of options to counter Michigan’s authorities, allegedly ranging from peaceful to more aggressive ones – like kidnapping the governor, the filing said. The federal agency learned about the meetings and their contents from a paid source within the group.

"At the time, the FBI interviewed a member of the militia group who was concerned about the group’s plans to target and kill police officers, and that person agreed to become a [confidential source]", the FBI agent wrote in the affidavit.

Whitmer's strict anti-pandemic measures have won her both praise and criticism among residents of the state. In a series of executive orders, the governor limited public assemblies to 50 people at the same place, introduced mandatory face covering indoors, and forced education facilities to switch to virtual learning. She also extended the "stay at home" executive order numerous times until July and has continued to extend the state of emergency in Michigan, with the latest extension ending on 27 October.

While some of the measures have since been lifted, many remain in place, such as requirements for businesses to follow COVID-19 "safety protocols" in their daily operations. Numerous businesses, which have already suffered from the pandemic-induced lockdowns, have been fined for violating these protocols over the past months.

How Quickly Will US Labour Market Rebound Happen Amid Gradual Lockdown Easing?

US Department of State Resuming Passport Services After COVID-19 Lockdown