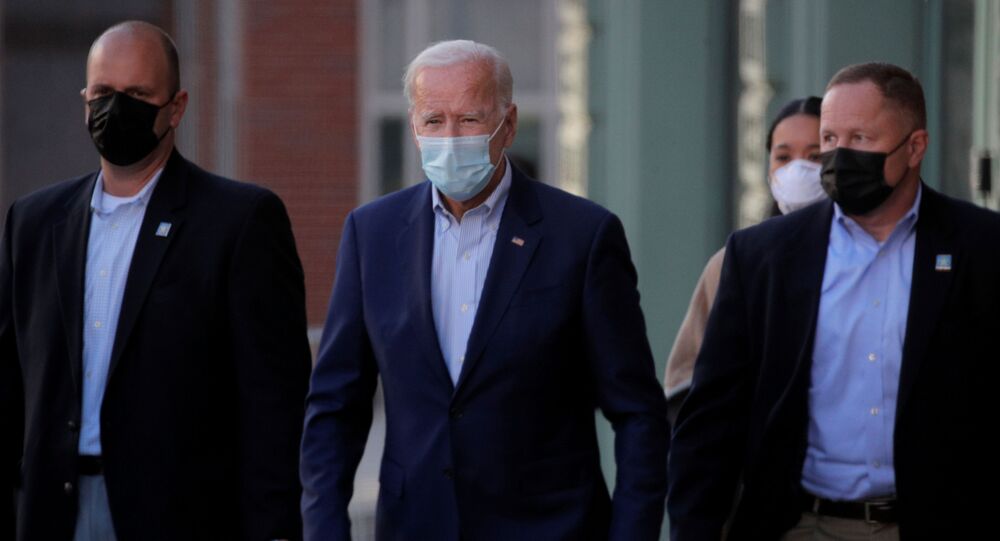 Barack Obama's vice president earlier raised eyebrows and had to walk back comments that African American voters "aint black" if they feel undecided about whether to vote red or blue in the approaching national election.

The Democratic Party's nominee, Joe Biden, has generated a storm of reactions after being seen in a now viral clip suggesting why Americans managed to efficiently self-isolate during the COVID-19 outbreak.

"And they say, 'Well, why in the hell would you say that Biden? You just talked about all these difficulties'. Well, I'll tell you why. Because the American public, the blinders have been taken off", Biden told the roundtable attendees during a 15 September meeting with veterans in Tampa, Florida, expressing a positive outlook on dealing with the problems the country faces, primarily those triggered by the virus flare-ups.

"They've all of a sudden seen a hell of a lot clearer. They're saying, 'Jeeze, the reason I was able to stay sequestered in my home is because some black woman was able to stack the grocery shelf", the former vice president went on, further mentioning a whole slew of other people going to great lengths to help fight the pandemic.

"A young Hispanic is out there, these dreamers are out there, 60,000 of them acting as first responders and nurses and docs. Or all of a sudden people are realising, 'My Lord, these people have done so much. Not just Black, White, across the board, have done so much for me. We can do this. We can get things done.' And I think they're ready", Biden rounded off at length.

Could you speak a bit louder for those of us in the back?

"The reason I was able to stay sequestered in my home was because some black woman was able to stock the grocery shelf". pic.twitter.com/TV5yDQKMra

The former vice president has since been called out on social media, with critics branding the comments "racist" and joking about the Biden campaign after the ex-VP's "back-handed compliments".

The way Joe structures his comments, sort of back-handed compliments, are pretty much the same structure as the 2008 Primary.
"You can’t go to a 7-Eleven or Dunkin’ Donuts unless you have a slight Indian accent". https://t.co/yjmXhqZNmf

I mean - how can people not see what a complete and idiotic racist he is? Life is so backwards.

Quite a few suggested the work at the frontline of the pandemic has nothing to do with the colour of one's skin:

My husband is white and has stocked the grocery shelves - for the last ten years! He wears a mask for 8 hours and follows all the rules of our State! No extra money and does it with a smile behind the mask! What does the color of the skin have to do with this?

"You ain't Black if you ain't stocking a grocery shelf for Joe Biden", political commentator Dave Rubin quipped, alluding to Biden's infamous "You ain't Black" gaffe from earlier this year, while Ricochet editor Bethany Mandel asserted the rhetoric should incite a debate on the "morality of the lockdowns and how we've made lower-income Americans into human shields".

Yet, many stood up in defence, saying the media have been cutting a certain utterance out of the full context, with the latter also referring to Hispanics, etc.

He's saying people of colour are taking risks by working and keeping the shelf's full for food for others to buy. I think

He is saying we are able to stay home because essential workers do their jobs and many are minorities, why don’t you just pick a fight over something important.

Others rushed to suggest that there would be an enormous uproar if President Trump or a Republican were caught saying what Biden said.

Incidentally, the account of the pro-Trump Twitter user who originally shared the video clip appeared to have been suspended sometime Monday evening after his tweet went viral. Fox News reached out to Twitter with a request to comment on what had led to the account's suspension.

In May, Biden landed in hot water over the comments he made to "Breakfast Club" host, Charlamagne Tha God, when he told Black voters "you ain't Black" addressing their undecidedness over who to support in the upcoming November election - him or President Trump.