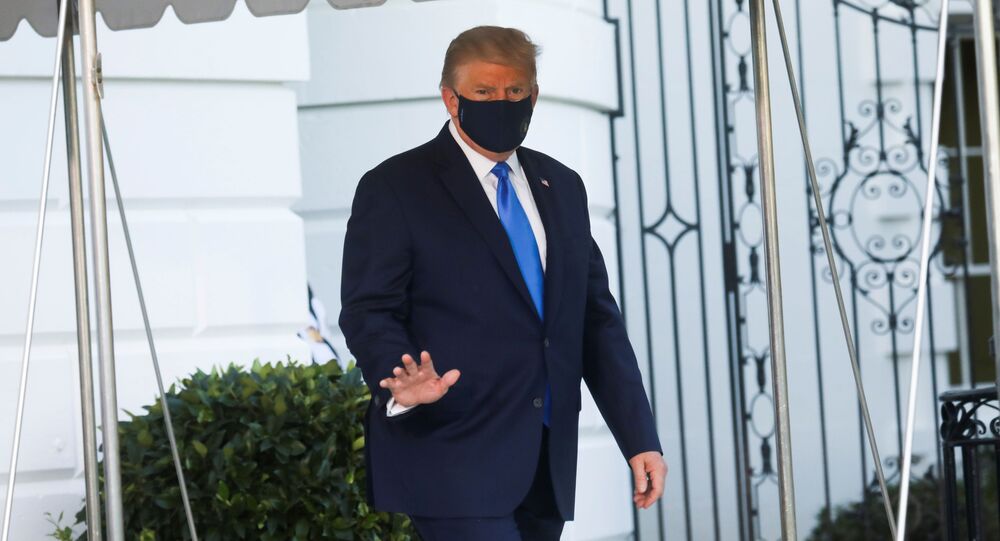 MOSCOW (Sputnik) - US President Donald Trump received a positive result from a rapid test for the coronavirus on Thursday but decided not to disclose the result while waiting for a more thorough screening, The Wall Street Journal reports citing anonymous sources.

Trump got the positive result from the rapid test on Thursday evening, before his appearance on Fox News, where he said he was being tested for the coronavirus after his close aide Hope Hicks tested positive, the newspaper reported on Sunday.

Because Trump's rapid test came back positive, he was given a second, more reliable test, which is in line with White House protocols, according to The WSJ.

The newspaper said Trump asked an advisor not to disclose the results of his rapid coronavirus test on Thursday.

Trump announced on Twitter in the early hours of Friday that he and his wife Melania had tested positive for the coronavirus. On Friday afternoon the president was taken to the Walter Reed National Military Medical Center in Maryland. In a 4-minute video recorded from the hospital and released on Twitter on Saturday, Trump said he was feeling better and was going to be back soon.

Dr Sean Dooley of the Walter Reed medical center said at a Sunday briefing that Trump continued to improve.

Dr Brian Garibaldi of Johns Hopkins University, in charge of the president's therapeutics, said on Sunday that Trump had responded well to the remdesivir antiviral treatment and that he could be allowed to return to the White House as early as Monday.

"If he continues to look and feel as well as he does today, our hope is that we can plan for a discharge as early as tomorrow to the White House where he can continue his treatment course", he said.

Earlier, White House physician Dr Sean Conley said in a statement that Trump was doing well and was fever-free and that the doctors were "cautiously optimistic" about his condition.