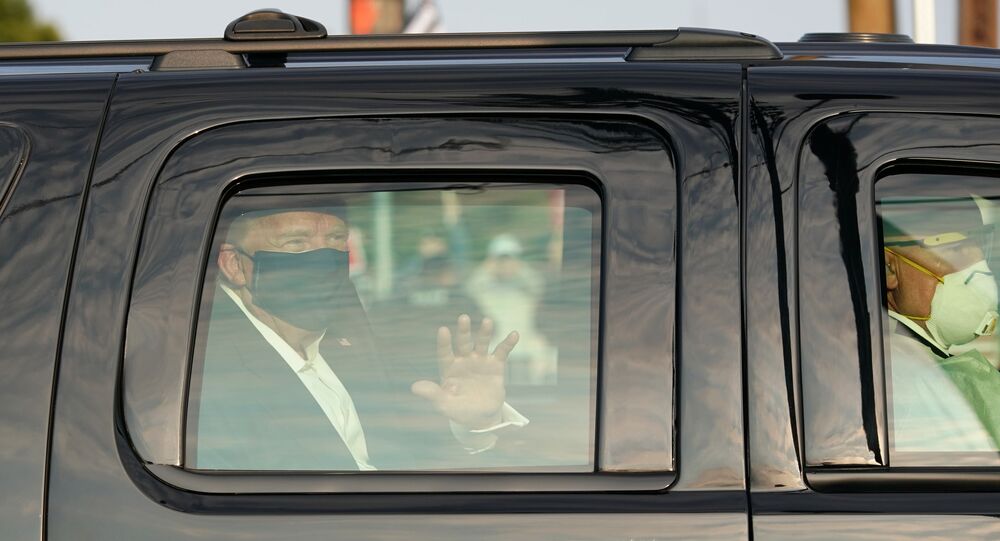 Trump is currently being treated at the Walter Reed National Military Medical Center, which he departed for after testing positive for COVID-19, but medics say he could be discharged as early as Monday.

Donald Trump made his first public appearance after departing for the hospital, showing up to greet citizens who have gathered outside Walter Reed on Sunday to support the president.

The president drove in a black armoured Surburban past a crowd of supporters and then returned back to the medical centre.

MOMENTS AGO: President Trump left Walter Reed to do a drive by parade for supporters gathered outside.
The crowd loved it. 👏🏻#Trump2020#COVID
pic.twitter.com/GYJUwCJbDT

Trump was seen wearing a black mask and waving with his both hands behind the closed window to his supporters, who held posters saying "Get Well Soon". He also gave a thumb-up, but due to the virus, could not get out of the limo.

Trump drives by the press and supporters outside Walter Reed hospital. pic.twitter.com/3phtKthqTH

On Friday, the president announced he and First Lady Melania had contracted the novel coronavirus and will be self-isolating. However, Trump vowed to continue to work and finish up his election campaign. The president tweeted an optimistic video on Sunday, thanking citizens who have wished him well and the doctors that have been treating him at Walter Reed.

"I really appreciate all of the fans and supporters outside of the hospital. The fact is, they really love our Country and are seeing how we are MAKING IT GREATER THAN EVER BEFORE!" Trump wrote on Twitter on Sunday afternoon.