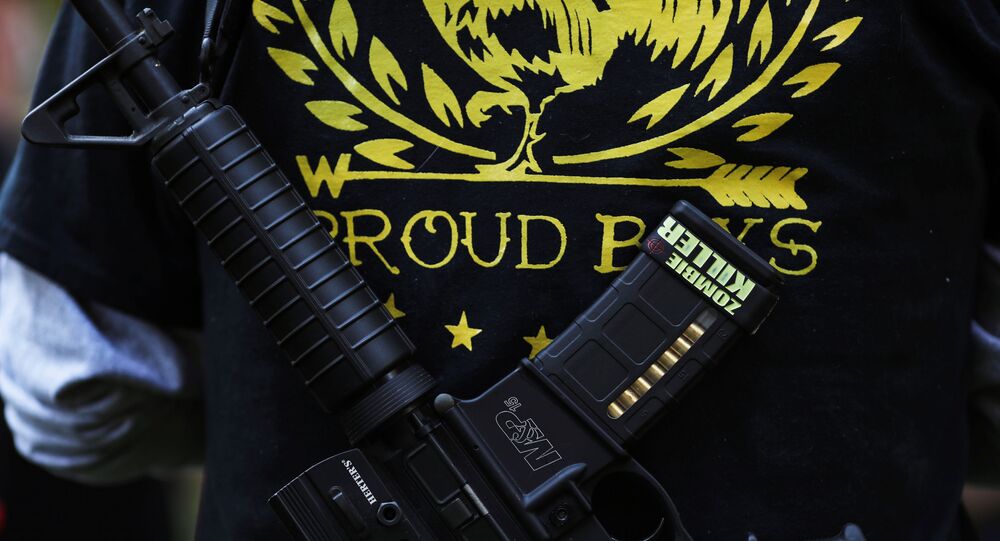 Under the governor's orders, law enforcement officers will reportedly have access to tear gas, despite a previous ban the substance's use by cops by Portland Mayor Ted Wheeler, who also serves as a commissioner for the city's Police Bureau.

The governor of Oregon, Kate Brown, has declared a state of emergency for the city of Portland on Friday, ahead of a planned rally to be held by the right-wing Proud Boys group, Fox News reports.

According to the media outlet, the decision was made as members of the Proud Boys plan to gather at a downtown park on Saturday, "potentially setting the stage for confrontations with counterprotesters".

"The Proud Boys and Patriot Prayer groups have come to Portland time and time again from out of state looking for a fight and the results are always tragic," Brown said during a news conference."Let me be perfectly clear: We will not tolerate any kind of violence this weekend. Those stoking the flames of violence, those coming to Portland looking for a fight will be held accountable."

​State Police Superintendent Travis Hampton noted that a "massive influx of state troopers and sheriff's deputies" will occur in Portland starting Saturday morning, though it wasn't immediately clear exactly how many law enforcement officers are "tapped" to come to the city, the media outlet adds.

Hampton also said that, per the arrangement, officers will have access to tear gas, even though Portland Mayor Ted Wheeler, who also serves as the Oregon Police Bureau commissioner, previously directed law enforcement to stop using the substance for "crowd control".

"Operating under the governor's emergency act, we will not remove CS gas as a possibility from these events," Hampton said. "We will use it judiciously. We hope we will not use it at all, but we will make this available not only to Oregon State Police troopers and Multnomah County Sheriff's deputies, but also to Portland police officers."

Portland became a hotspot for nationwide protests against racism and police brutality in the United States after an African American man named George Floyd was killed in custody in Minneapolis by white police officers.