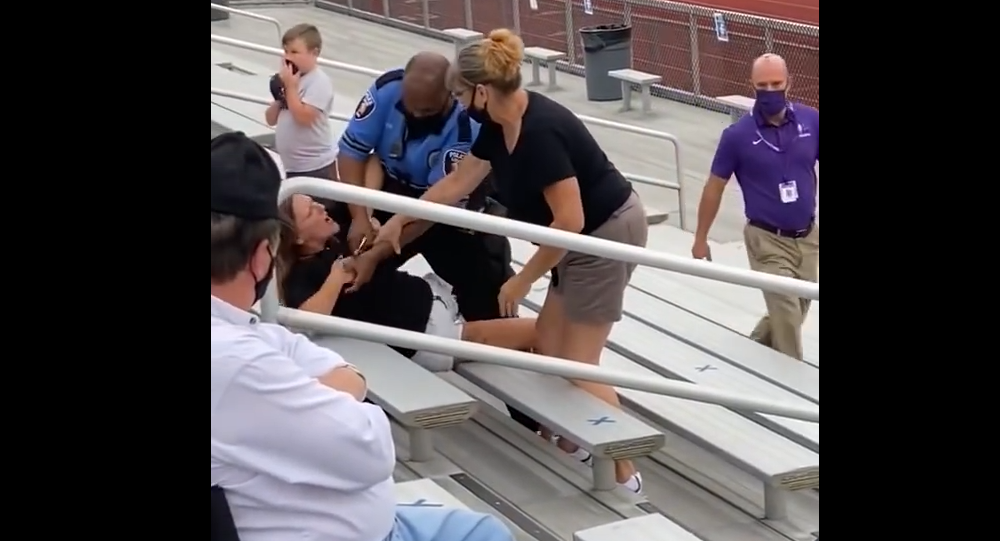 An Ohio woman has been charged with trespassing and may face additional charges after she resisted arrest and refused to adhere to a school’s mandatory mask policy during her son’s middle school football game earlier this week.

Facebook user Tiffany Lynn Kennedy argued in a Wednesday social media post that Logan Police Department (LPD) officers exhibited “police brutality at its finest” on Wednesday by immobilizing a woman with a stun gun and forcibly removing her from the Logan High School Stadium in Logan, Ohio.

Kitts, whose child was playing in the middle school football game, continually refused to adhere to the policy, despite Smith explaining that a face mask was required on school grounds. As a result, the officer ordered the woman to exit the stadium or be forcibly removed and cited for trespassing.

Kennedy’s video footage of the incident begins around the moment that Kitts resists and the officer uses force to escort the mother out of the stadium. She can be overheard screaming at the 1:55 timestamp, shortly after the officer deploys his department-issued Taser stun gun.

“Tasing this lady over not wearing a damn mask,” says an individual out of the camera’s sight.

It’s worth noting that the second officer who assisted with the arrest was not wearing a mask. The footage also showed that Kitts did have a mask in her back pocket.

Logan Athletic Director Theresa Schultheiss told the Marietta Times that, of the 300 fans present at the Wednesday football game, only Kitts and a grandmother were “having issues with compliance” with the mask policy, which appears to be a bit more aggressive than Democratic Ohio Governor Mark DeWine’s statewide mask mandate.

The order, imposed in July, stated those in Ohio must wear a mask at any “indoor location that is not a residence.” A mask is also required when outside, but only when one is “unable to maintain six-foot social distance from people who are not household members.”

“This rule has been in effect since we were told we could play,” Schultheiss explained, as reported by the Marietta Times.

“Everyone that came through ticketing tonight was reminded, we had regular announcements over the PA reminding you that mouths and noses needed to be covered and we had signs at the bathrooms.”

The LPD has announced that Kitts, who is charged with criminal trespassing, and “another female subject” could face additional charges, pending the outcome of an ongoing investigation into the matter.

Ohio is one of 16 states that have reported a decrease in new COVID-19 cases this week when compared to the previous week. More than 148,000 novel coronavirus cases and more than 15,100 associated hospitalizations have been logged by the Ohio Department of Health since the start of the pandemic.

At least 4,734 COVID-19-related deaths have been recorded by state officials.