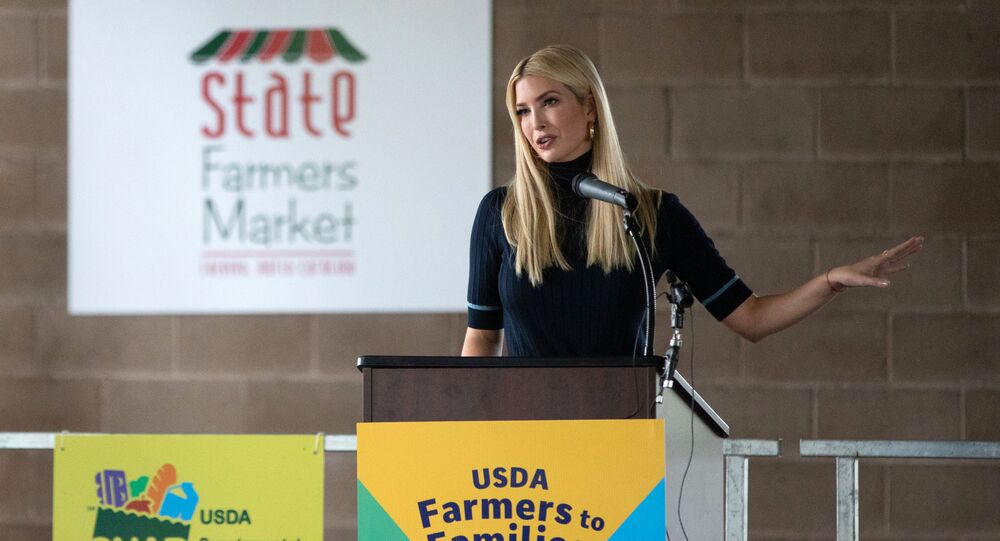 Ms. Trump, who is a special adviser to the president, has hailed POTUS’s accomplishments in diverse spheres, dwelling on his effective work on criminal justice  and a bunch of topical socio-economic issues, like assistance to small businesses and paid family leave.

When visiting Wilmington, North Carolina, on Monday, first daughter and senior White House aide Ivanka took part in a “fireside chat” hosted by her father’s re-election campaign, where she detailed the possible choices for voters in the upcoming national polls. She argued that the state’s motto “To be, rather than to seem” fully reflects them:

“On one hand you have a person who is a vessel for whatever the fringe of the party or the mainstream media want him to be, but on the other hand you have someone who is arguably the most authentic president we've ever had,” Ivanka explained during a meeting with prospective voters at a Wilmington bakery, as North Carolina-the most volatile of all the swing states, remains a key battlefield in President Trump’s re-election campaign.

The top aide, who was in North Carolina for the fifth time in three and a half years, spoke at length of what she sees as her father’s unquestionable accomplishments across a variety of spheres – namely the First Step Act which abolished the so-called “three strikes” life sentence for some offences, allowing judges more discretion as they deal with minor non-violent crimes. Praising the updated criminal justice system, she said:

“Of all the people who've talked about positively impacting the system for better, it was this president who delivered the most historic criminal justice reform that we've had in a generation and it's just getting started,” the first daughter touted.

© AP Photo / Alex Brandon
Ivanka Trump speaks from the South Lawn of the White House on the fourth day of the Republican National Convention, Thursday, Aug. 27, 2020, in Washington

Separately, she singled out POTUS’s response to the coronavirus flare-ups in the nation: despite the president’s initially sceptical stance on across-the-board lockdowns quickly landing in critics’ crosshairs, the Paycheck Protection Program was lauded by many.

The White House adviser eagerly jumped at a chance to emphasise how the financial initiative helped the economy by enabling small businesses to continue pay their workers during the recent healthcare crisis.

Ivanka told the crowd of fully-masked potential voters that her father “used his business experience to harness the private sector to clear the road blocks that exist within government to get things done,” further going on to praise the Trump team’s focus on family policy and education, including paid family leave, among other social issues.

© AFP 2021 / JEAN CHRISTOPHE MAGNENET
Donald Trump’s Ex Wife Ivana Opens Up on How She Gets Along With POTUS, FLOTUS Melania

She continued to assure the would-be electorate that the president “doesn't want to see the country go in the wrong direction, and it won't under his watch,” she rounded off.

Hogan Gidley, the Trump 2020 National Press Secretary, moderated the conversation with Ms. Trump. They both talked about how President Trump had changed the political landscape after his 2016 run, adding they don’t expect him to change if elected to a second term.

“It’s an amazing thing when you get to Washington, how quickly the people who have just immediately arrived changed and they bend to the system and the winds they face, and they conform and change their views,” Ms. Trump said.

“With this president, that will never happen. It’s impossible. He will not bend. He will keep fighting for American people and what he believes is right.”

A Trump aide said Ivanka plans stops in Arizona, Texas and Florida in this four-state in four-day campaign swing for her father’s re-election bid.