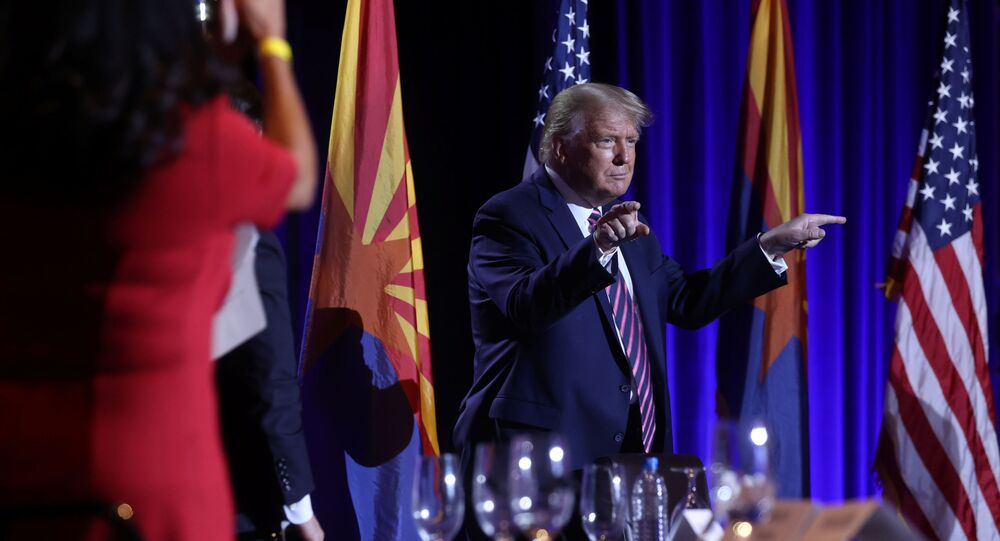 Arizona is considered one of the battleground states ahead of the November presidential election, where the growing Latino population could make a difference.

President Donald Trump travelled to Phoenix to participate in a Latinos for Trump roundtable at the Arizona Grand Resort on Monday, marking his fifth visit to the state this year.

Just landed in the Great State of Arizona! pic.twitter.com/c2ilTbkLva

ON MY WAY — SEE YOU SOON! pic.twitter.com/t7vAElQQt6

After his Air Force One landed at Phoenix Sky Harbor International Airport, Trump gave brief remarks ahead of the roundtable, saying that his campaign has been "honoured" by the polls with the Hispanic vote and that he thinks his administration is doing a "really good job for Hispanics, the Latinos".

"We're doing a fantastic job, and I think it's represented very well in the polling numbers that we're getting because they haven't really seen numbers like that for a long time. We're very honored by that", the president said.

Trump also exchanged his thoughts about climate change and wildfires with Democratic Governor Gavin Newsom, saying that the weather will soon start to get colder. "It will start getting cooler. Just watch. I don’t think science knows actually", he said. He earlier blamed poor forest management for the blazes ravaging the West Coast, including California and Oregon.

'Latinos Are Conservative', But 'Don't Know It'

The conservative panel at the roundtable thanked Trump for his initiatives while in office, including the Paycheck Protection Program, corporate-tilted tax cuts, and those aimed at benefitting the Latino community. The leader of Latino Republican-supporters in the state, Sergio Arellano, even said that Trump's policies are "music to my ears".

"Latinos are conservative. They just don't know it", Arellano said.

Another participant said he was upset that parents could not help their children achieve success, for which he blamed the ongoing unrest across the United States, describing it as "so much hate, breaking windows, stealing someone else's property".

State Rep. T.J. Shope, "a proud Hispanic" as he himself put on his Twitter page, told the president that being a minority, it is hard to deal with the social pressure against his Republican views.

There were also Latinos who were against their minority group's support for the president. A former organiser with Cesar Chavez called it "disgusting" that Latinos of immigrant origin "now turn their backs on their immigration legacy".

Trump Campaign Building up Efforts to Attract Hispanics in Arizona

Kelli Ward, chairwoman of the Arizona Republican Party, said that Republicans are now doing lots of Spanish-language advertising, trying to reach out to the Latino community.

Ward also criticised Democrats, namely presidential candidate Joe Biden and vice presidential nominee Kamala Harris, for their poor campaign efforts in Arizona, pointing out that Harris "came to Arizona for six minutes via some electronic mechanism and pretended to have a roundtable with Latinos and that's just a farce".

Republicans are now trying to use that opportunity in Arizona, which has long been a predominantly Republican state, except for 1996. In 2016, Trump won Arizona 51-45 percent against Hillary Clinton, but recent polls have shown Biden leading Trump there.