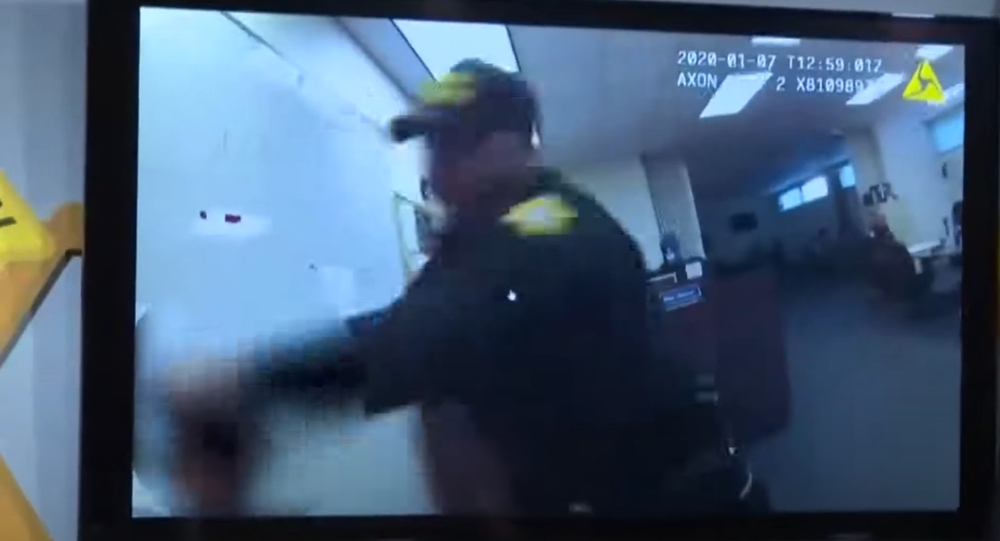 Former Master Deputy Kyle Oliver, a 29-year-old supervisor with the Richland County Sheriff’s Department (RCSD) in South Carolina, was terminated from his job after his superiors were shown body camera video of him slamming a woman in police custody against the ground.

RCSD Sheriff Leon Lott revealed during a Wednesday news conference that Oliver, a member of the force since 2013, observed a “highly agitated” woman who was detained, handcuffed and banging her head against a wall on January 7.

He said that after the woman put a hole in the wall, Oliver “walked up to her and grabbed her by the head of her hair and slung her on the ground.”

Be advised, the footage below contains scenes that some may find offensive.

Deputy fired and arrested for assaulting a suspect in custody back on January 7.

“It’s disturbing,” Lott remarked of the video. “It disturbed me greatly. It didn’t take me long after seeing it to realize we have a problem.”

Lott revealed to the public that he received a phone call alerting him to the recorded incident on Monday. It remains unclear who reported Oliver, as the sheriff noted the woman who was abused did not do so, nor did the officers who witnessed the assault. Additionally, Oliver’s police filing on the matter did not match the body camera footage.

“Our checks and balances did not work,” Lott said, referring to the RCSD policy of reviewing body camera footage tied to a use of force report.

“The reason why we have these cameras is to monitor the deputies and their activities and this is one time that it didn’t happen,” he said, adding that he hopes this is the only incident that slipped through the department’s self-regulation system.

Lott went on to emphasize that the type of force displayed by Oliver in the video was “not part of our training, not what we teach, not what we approve.”

“When we fail as an agency … we take quick, swift action, and we do it publicly,” he said. “We’re not going to hide from it or try to sugarcoat it -- we’re going to put it out there for what it is.”

Lott declared that the RCSD will be implementing “new policies” geared toward ensuring its checks and balances are carried out without fail.

Oliver had his equipment confiscated during his Tuesday arrest. The 29-year-old was transported to Alvin S. Glenn Detention Center and booked on charges of third-degree assault and battery, but he has since been released after posting a $2,125 personal recognizance bond.