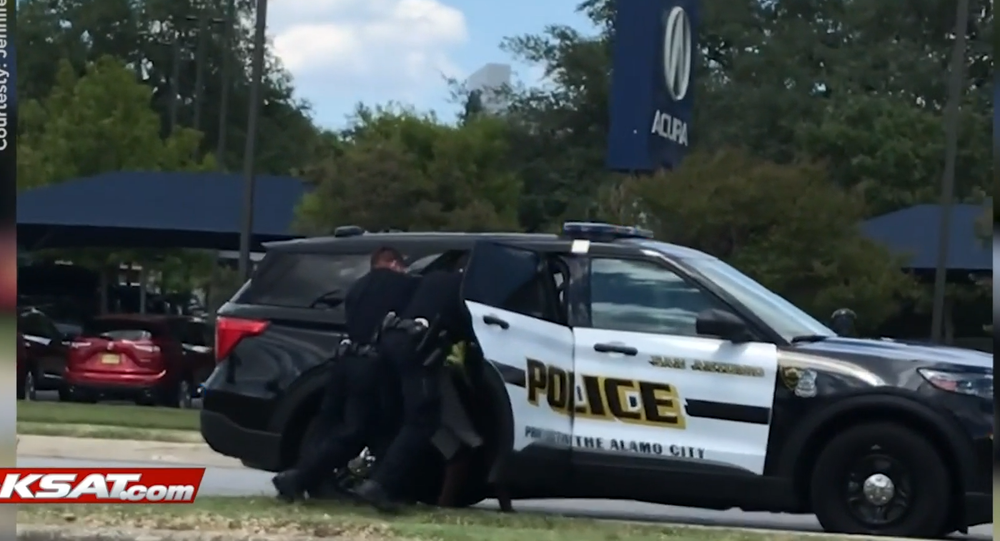 A 33-year-old Black man has been arrested by San Antonio, Texas, cops and charged with two counts of assaulting a police officer, despite the fact that he himself was assaulted by officers who reportedly believed he was the Black, male suspect they were in search of.

Mathias Ometu was released from police custody on Thursday, two days after he was thrown in Bexar County Jail and charged with two felony counts of assault on a police officer, according to San Antonio-based outlet KSAT.

The arrest was caught on camera by San Antonio attorney-turned-eyewitness Victor Maas, who told the outlet that he “felt bad for the guy,” because the situation did not appear to be handled in an appropriate manner.

“About 20 minutes ago this guy was jogging … and he got pulled over, ‘cause he’s being Black, of course,” Maas said toward the end of his video, recounting the situation he witnessed.

“They wanted to detain him, and they put the handcuffs on him, and they start asking him a whole bunch of questions,” he added. “He would not cooperate, as is his rights not to give them any information.”

Maas detailed that the 33-year-old and authorities then got into a “tussle,” in which the cops “yanked on him pretty good.” Another witness recalled hearing the deployment of a stun gun.

Ometu was released from the county jail on a $20,000 bond, according to KSAT.

“I understand that everyone is hypersensitive with everything going on in the country. The officers legally detained the individual and if he believes that officers stopped him for no apparent reason – he can always file a complaint with our Internal Affairs Unit,” Sgt. Michelle Ramos, San Antonio Police Department spokesperson, said in an emailed statement to KSAT on Thursday.

Not only was Ometu not the suspect cops were searching for, but he also did not have any criminal record. Nevertheless, he was booked by authorities that same day.

“The individual contacted was in close proximity to the call and he matched the physical and clothing description provided by the victim,” Ramos claimed. “That was the only reason he was stopped and questioned as the officers legitimately believed he was the wanted suspect. This incident will be reviewed administratively to ensure all policies were followed.”

However, independent San Diego Mayor Ron Nirenberg announced on Thursday that an investigation has been launched into the matter.

I am seeking a full accounting of this incident, which is currently under investigation.

We have to approach this situation seriously because every single resident deserves fair and equitable treatment from their city. https://t.co/NeUsAfbdnE

“We have to approach this situation seriously because every single resident deserves fair and equitable treatment from their city,” he asserted.