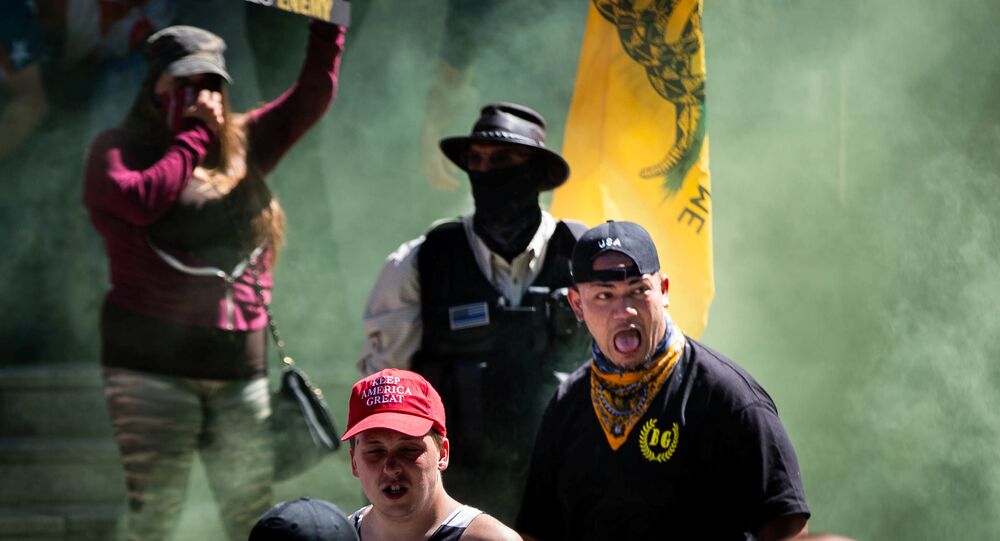 MOSCOW (Sputnik) - Police Bureau of Portland, a city in the US western Oregon state, warned the people who had gathered near the city hall on the back of incessant George Floyd protests that the law enforcement would use force to disperse them as the assembly was declared a riot.

"To those on SW 4th Avenue outside of City Hall. This gathering has been declared a riot. All persons near SW 4th Avenue and SW Madison Street must disperse by travelling to the SOUTH and WEST. You are ordered to disperse immediately," Portland police said on Twitter.

To those on SW 4th Avenue outside of City Hall. This gathering has been declared a riot.

All persons near SW 4th Avenue and SW Madison Street must disperse by traveling to the SOUTH and WEST. You are ordered to disperse immediately.

​The law enforcement warned in a follow-up tweet that non-compliance might result in "citation or arrest, and may subject you to the use of tear gas, crowd control munitions, and/or impact weapons."

#BREAKING: Another night of unrest in Portland. Here's a look at the damage done to city hall. Pictures from @PortlandPolice . Police say the group broke windows & entered the building, even lit a fire outside. Police declared a riot. 25 people arrested. #KOMONews pic.twitter.com/Qn7Y6sIoGQ

​According to local media reports, at least 100 protesters gathered near the city hall and some of them intruded into the building and sprayed graffiti on the walls. Six people reportedly ended up arrested.

© REUTERS / Terray Sylvester
Watch Protesters Set Portland Police Building on Fire, Prompting Declaration of Riot, Arrests
Protests in Portland and numerous other US cities were ignited by the notorious murder of George Floyd, an African American man, by a white police officer in late May. The signature feature of Portland protests has been the instalment of barricades by protesters.

On Tuesday, another public gathering near a Portland police association building was declared a riot as protesters set the building on fire. Police intervened and officers were thrown bottles and other objects at. Several people were arrested as a result.