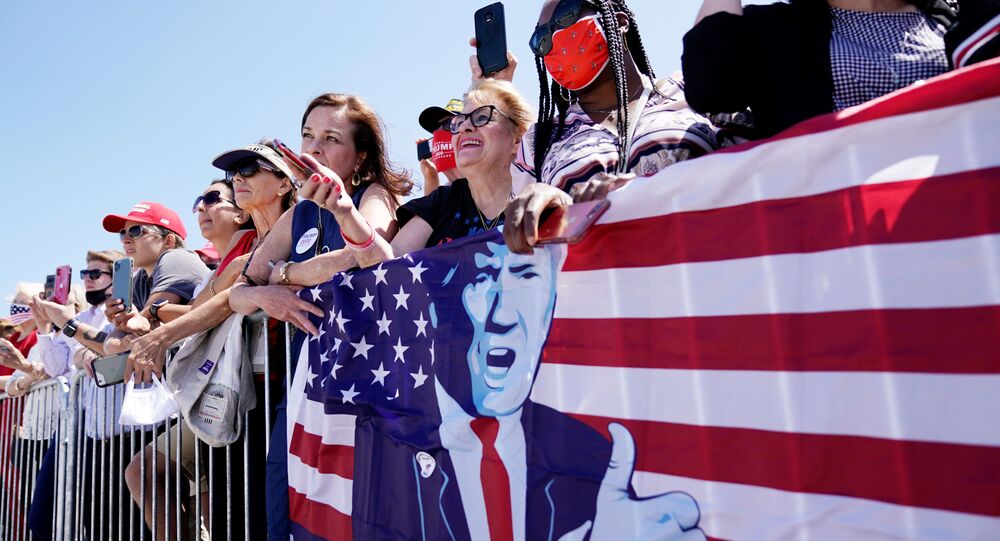 As Joe Biden Gets Democrat Nomination, What Will Be 2020’s Key Swing States?

The Democrats have formally nominated Joe Biden as their presidential candidate at an unpredented virtual convention. Biden and running mate Kamala Harris will take on Donald Trump and Mike Pence in November but where are the main battlegrounds?

Joe Biden is currently ahead of Donald Trump in the opinion polls but there is almost three months to go until the election so a lot could change.

One factor that could conceivably make a difference is whether singer and music mogul Kanye West makes it onto the presidential ballot.

Kanye West’s campaign missed a filing deadline by 14 seconds and is now waging a legal battle against the state of Wisconsin that hinges on whether or not “the seconds from 5:00:00 to 5:00:59 are inclusive to 5 p.m.” https://t.co/8KVevKFD5j

​On Tuesday, 18 August, the Wisconsin Elections Commission recommended West and his running mate Michelle Tidball be kept off the ballot in the state because they missed a 5 August deadline to submit 2,000 signatures from voters.

The Democrats claim the Republicans are covertly pushing West's candidacy in a bid to take away crucial votes from the Democrats in a handful of swing states.

Donald Trump shocked Hillary Clinton’s campaign office in 2016 by winning Wisconsin, a traditional Democrat stronghold which had last gone Republican way back in 1984 when Ronald Reagan was President.

In 2016 Trump got 47.9 percent of the popular vote in Wisconsin, compared to Hillary Clinton’s 46.9 percent, with the Libertarian candidate Gary Johnson winning 3.58 percent.

A poll by Marquette University earlier this month put Biden five points ahead of Trump in Wisconsin, which is known as the “Badger State”.

​Around 35 percent of those polled in Wisconsin said they planned to send mail-in votes, rather than in person, which means that President Trump’s recent attempts to reduce funding for the US Postal Service could be crucial.

In Michigan, another Democrat stronghold - or blue state - which went red in 2016, the result was even closer - Trump got 47.5 percent, fractionally ahead of Clinton’s 47.27 percent.

Neither Trump or Clinton had bothered to campaign in Michigan - home of Detroit and the auto industry - because they were convinced it would go Democrat, as it had in every election since 1988 when the hapless Michael Dukakis was the Democratic nominee.

So this year Michigan will fall into the swing state category, although all the signs are that Biden will win it back. He is nine points ahead in the latest poll.

© AFP 2020 / KAREN BLEIER
Tourists walk in Lafayette Park, across the street from the White House in Washington, DC

Florida has been a swing state for a number of years, most famously in 2000 when Al Gore thought he had won it - and with it the crucial 270 electoral college votes needed to win the White House - only to lose it to George W. Bush in the notorious "hanging chads" debacle.

Bush held onto the Sunshine State until 2008 when Barack Obama won it back and retained it four years later.

Hillary Clinton campaigned extensively in Florida in the 2016 election but she lost the state (by 49 percent to 47.8 percent) despite winning Miami-Dade, Palm Beach and several other big urban counties.

Trump - who spends much of his spare time at his Mar-a-Lago resort in Palm Beach - is currently five points behind Biden in Florida, which has suffered badly during the coronavirus crisis with almost 10,000 deaths.

Ohio is always considered to be the ultimate bellwether state and electoral wisdom says that the White House occupant has to carry it to gain victory.

The last time the President did not win Ohio was in 1960 when John F. Kennedy lost it to his Republican rival, Richard Nixon.

In 2016 Trump won it easily - by 52 percent to 43 percent - and this year it will remain in play right up until the close of polls.

Biden and Trump are neck-and-neck there at the moment and the choice of Kamala Harris, a California senator, as his running mate is not expected to make much of a difference in Ohio, a rustbelt state which has warmed to the incumbent’s anti-China rhetoric.

Another state which is expected to get an awful lot of attention from both candidates this fall is Pennsylvania, which has 20 electoral college votes.

96% Approval Rating in the Republican Party. Thank you! Also, leading in most swing states!

​When Trump took Pennsylvania (by 48.1 percent to 47.4 percent) it came as a huge shock to the Clinton camp and it was arguably the knockout blow.

The state contains Philadelphia and its suburbs - which vote overwhelmingly Democrat - but it also contains rust-belt towns like Erie, where Trump’s protectionist stance and call to bring jobs back to the US went down well.

Biden has opened up a four point gap in Pennsylvania, a state which prior to 2016 had remained solidly blue since 1988.

.@MarkMeadows said this morning, he didn't know the "MAIL CAPACITY" of the 'sorting machines' that were removed. HERE, THE HIGH CAPACITY MACHINES (300K or >of MAIL)were removed from BLACK/BROWN cities in #SWINGSTATES! @GeoffRBennett @EleanorNorton @AyannaPressley @RepMaloney pic.twitter.com/G4BVg5INGy

​North Carolina is also considered a swing state although it has been in the Republican camp in recent elections - the exception being in 2008.

Hillary Clinton was optimistic about winning North Carolina - which has a growing number of college-educated and ethnically diverse voters - in 2016 but although she won in cities like Charlotte, Trump took the state (by 49.8 percent to 46.13 percent) by winning all the rural counties.

Biden is currently 1.2 points ahead of Trump in North Carolina but whether he can hold that lead - which is within the margin of error - until November is open to doubt.

Another state which Hillary Clinton could have won in 2016 if her most optimistic campaign predictions had been proved right was Arizona.

Simulation of the Day - August 18:

The 77th most likely sim has Trump winning all swing states except for Nevada. Today's outcome has a 0.13% probability of occurring. pic.twitter.com/hAISfzQ3Gg

She ended up losing it (by 48 percent to 44.58 percent) as Trump played the xenophobia card in a state where fear of being overwhelmed by migration from Mexico and the rest of Latin America is a big factor.

The Democrats last won Arizona in 1992 but they believe the demographics are moving in their direction.

The state’s population has been rising in recent years and many of the new voters are Hispanic - who tend to vote Democrat - or newcomers to the state, including older people who have moved there from Democrat-voting states like New York and Illinois.

If Biden wins Arizona - and Ohio - it could put him on course for a landslide victory.

But it is way too early to call the 2020 presidential election.