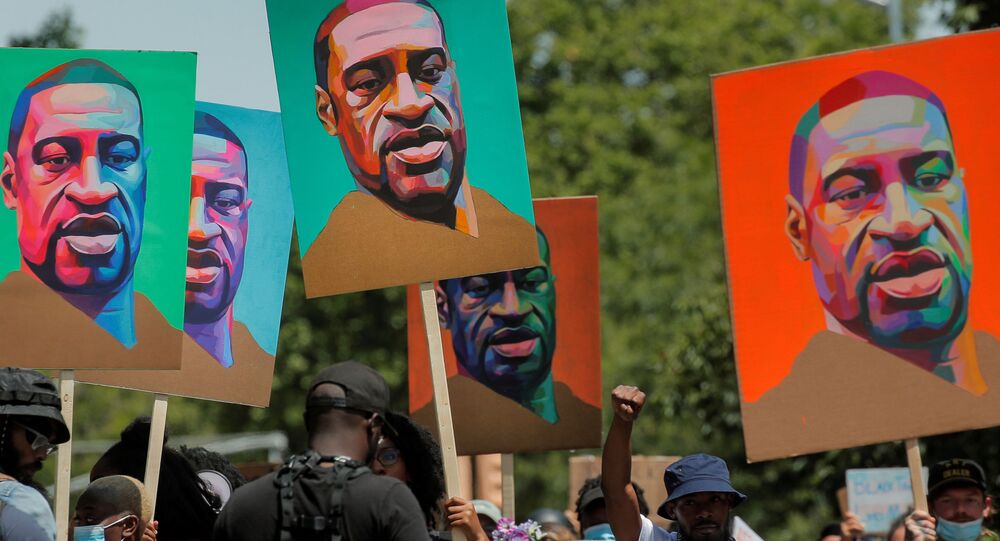 On 25 May George Floyd died when a police officer in the US city of Minneapolis knelt on his neck during an arrest. A Minnesota judge has ordered the police to release the footage taken by the arresting officers’ body cameras.

Several videos showing George Floyd struggling with police after being arrested on suspicion of passing a fake US$20 bill have been released on the orders of a judge.

Floyd’s death on 25 May sparked months of protests and riots by Black Lives Matter campaigners.

The hour-long footage shows the views from the body cameras of Officer Lane and Officer Kueng, who were the first to respond to a 911 call from the owner of a store in downtown Minneapolis.

This isn’t about George Floyd. https://t.co/zgSQksZTyq

​The officers speak to the shop assistant and then go outside and confront Floyd, who is sitting at the wheel of his car.

Lane can be heard shouting: "Put your f***ing hands up right now."

Floyd - who had a criminal record and knew he faced a long spell in jail if convicted - appears to panic and pleads with the officers, although he is largely incomprehensible.

​He appears to be weeping at one point and puts his head on the steering wheel.

Floyd is then dragged out of his car and handcuffed with a great deal of difficulty but as the officers try to put him in their squad car he begins to struggle again.

Tellingly Floyd said: “I can't breathe" several times before he ended up on the ground.

It is at this stage that Darnella Frazier, a 17-year-old passer-by began filming the video that went viral earlier this year - as Chauvin put his knee on Floyd’s neck.

​The video ends with paramedics arriving at the scene to deal with Floyd, who has lost consciousness.

The Minneapolis Police Department had initially refused to release the footage but Lane's lawyer filed it as evidence in court last month while making a motion to dismiss the charges against his client.

Hennepin County District Judge Peter Cahill then granted a request by US TV channels to broadcast the videos.

The incident has ramped up tensions between the police and the African-American community in most US cities.

Widespread looting in Chicago, but ask this: how dumb do you have to be to livestream yourself, with full rants to camera, while you attempt to destroy an ATM?

​In the early hours of Monday, 10 August, police clashed with rioters who attacked and looted shops in downtown Chicago after a black man was shot by police in Englewood on the notorious South Side.

More than 100 people were arrested and 13 officers injured.

The Mayor of Chicago, Lori Lightfoot, described the riot as "abject, criminal behaviour - pure and simple" and said it had nothing to do with the “legitimate” Black Lives Matter campaign.