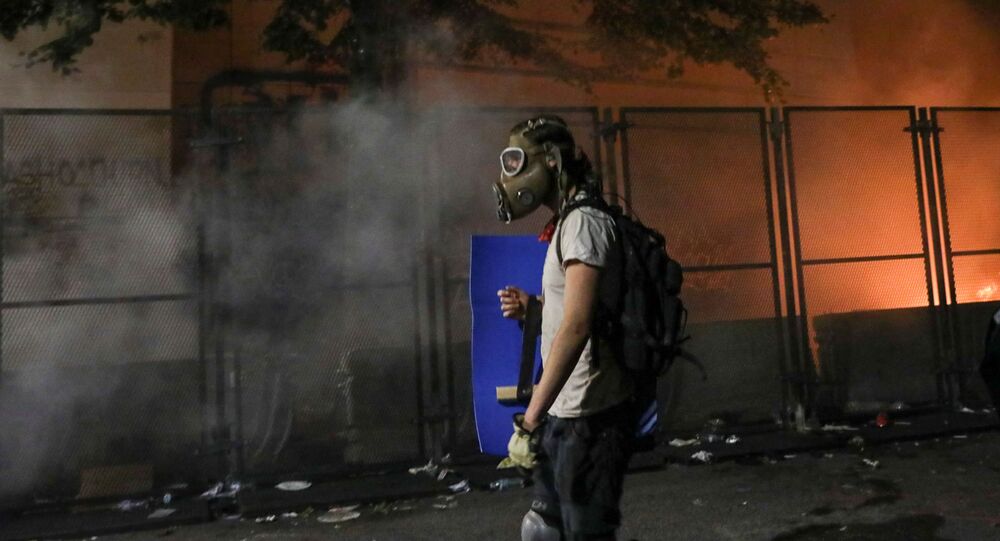 MOSCOW (Sputnik) - Civil rights protesters in the city of Portland, Oregon, have thrown an incendiary projectile at a courthouse that exploded into a fireball during the latest night of demonstrations and stand-offs with law enforcement officers, Portland Police said in a statement on Tuesday.

"At about 12:12 a.m., July 28, 2020 [07:12 GMT], a person threw a Molotov cocktail, or similar destructive device, against the front door of the courthouse which burst into a fireball when it struck the building causing a report to be heard and felt more than a block away. The crowd activity continued as before", law enforcement officials said in a statement.

The protesters began to disperse from the area roughly one hour after the projectile was thrown, law enforcement officials said, adding that one juvenile was arrested after hearing that individuals were attacking private vehicles.

Rioters threw a bomb at the front of the Portland federal courthouse. This wasn’t one of their usual firework explosives. #PortlandRiots #antifa pic.twitter.com/omCq0GtZMj

​On Monday, The Washington Post reported that the Trump administration has deployed 100 more federal agents to Portland, adding that the president may send a further 50 to the northwestern city.

Federal agents were first deployed in Portland in mid-July to protect a federal courthouse. Journalists from Russia’s Channel One broadcaster, who were reporting on the protests, sustained injuries and had their equipment destroyed by federal agents during the protests.

A US court on Friday issued an order prohibiting federal law enforcement agents from using physical force against journalists.