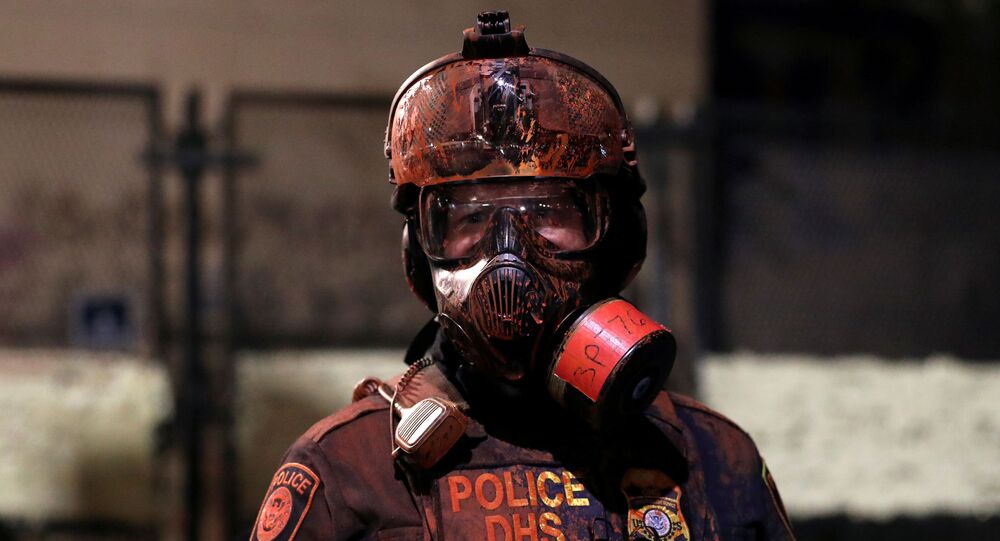 Portland has been engulfed in one of the most violent anti-racism protests in the United States, prompting President Donald Trump to send help to maintain law and order in the city.

Department of Homeland Security Secretary Chad Wolf has criticised Portland leadership for its handling of the protests in Portland, Oregon, saying that they have been far from peaceful, while defending the decision to deploy federal forces to the city.

According to Wolf, the protesters have engaged in criminal actions that are very different from "normal criminal activity" and street crime in cities like Chicago, Kansas City, and others.

For several days, federal agents have been trying to prevent protesters from attacking a downtown federal courthouse, which has been the main target for rioters.

Wolf blamed the city authorities for letting the situation get out of control and called on the city leadership to follow the example of other cities and cooperate with federal agents as they work to tackle the violence in Portland.

“We see city leadership there has fostered an environment that allows these criminals to do this throughout the night, untouched, absolutely untouched", Wolf said. "We need Portland to step up to the plate, do their responsibility and work with us to address violent criminal activity occurring every night."

Portland mayor Ted Wheeler, however, slammed Trump for sending federal forces to the city, accusing him of "attacking progressive cities with troops who are unwelcome and unskilled".

"Militarised agents are terrorising the American people. We must stand together for peace and reform, and against these un-American tactics", Weeler said.

Multiple arrests have been conducted by federal agents in Portland. Protesters have been vandalising city property, attacking police and federal agents with explosives, fireworks, rocks and bottles, and set fires near the federal courthouse. They also barricaded some of the city centre's important roads, making it difficult for law enforcement and health services to respond to emergencies, citing, in particular, a shooting incident in the northern precinct.

Acting Commissioner of the US Customs and Border Protection Mark Morgan shared multiple pictures from protests in Portland on Saturday, showing "tools" they used against federal agents which included knives, weapons, and fireworks. Morgan described it as the "actions of violent anarchists" and called on the local leadership to step in and restore order.