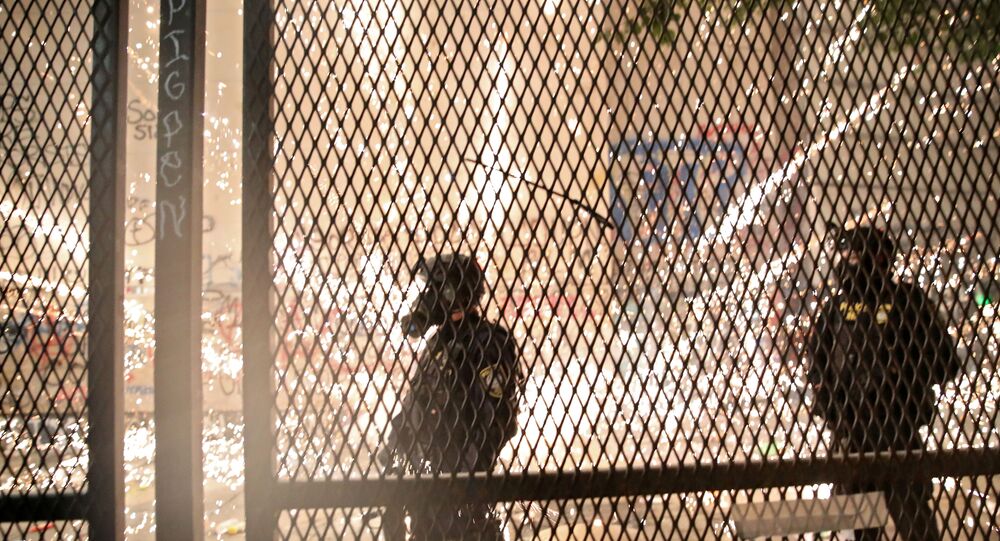 Anti-racism protests in Portland have been one of the most violent, prompting US President Donald Trump to dispatch federal forces to the city to help maintain law and order.

Someone has used metal spikes to puncture the vehicles of federal law enforcement agents in Portland, Oregon, the acting commissioner of the US Customs and Border Protection (CBP), Mark Morgan, said on Saturday.

Morgan posted a tweet and attached a photo of the spikes inside what looks like a federal law enforcement evidence bag.

Early this morning, metal spikes were used by criminals in Portland to puncture the tires of @CBP vehicles. pic.twitter.com/X5viFLFGB8

​He also shared pictures of other objects demonstrators presumably used against federal forces, including stones, fireworks, and even a knife and a firearm, apparently seized by the authorities.

They are putting lives at risk. pic.twitter.com/q4Xu5r9A6n

Morgan previously slammed the actions of the protesters in Portland, calling on the local authorities to step in and restore order in the city.

These are not the actions of peaceful protesters. These are the actions of violent anarchists who are looking to harm federal law enforcement and federal property. This violence must end. Local leadership needs to step up, denounce these actions, and regain order.

A downtown federal courthouse has been the main target of Portland protesters. On Friday, federal agents used tear gas to disperse the protesters and prevent them from attacking the building. Demonstrators have also set fires at the scene.

The authorities arrested at least 18 participants in the Friday protest, on charges ranging from assaulting federal officers to participating in attacks on a federal courthouse.