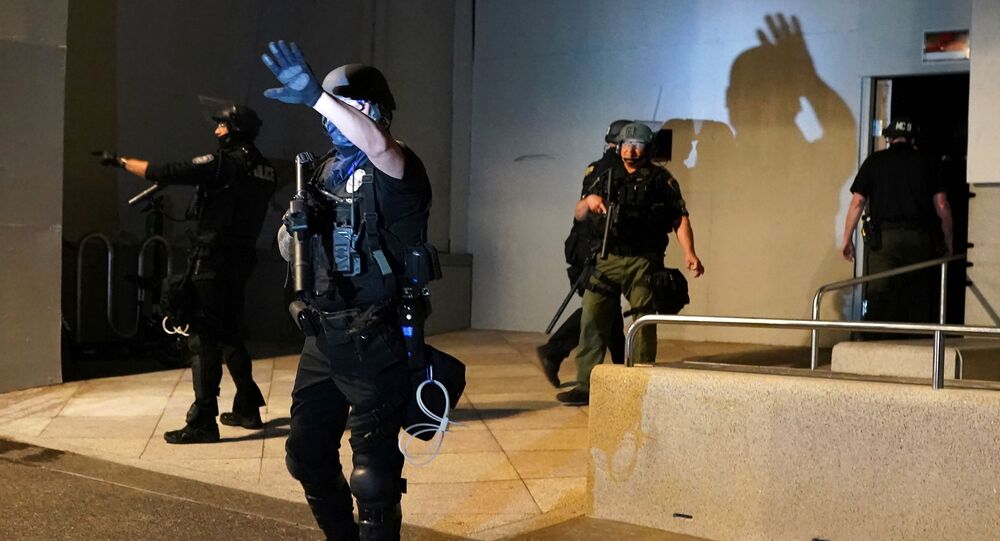 Portland, a stronghold for anarchist groups and left-wing activists has been subject to protests and riots since the 25 May death of African American man George Floyd while in police custody, with businesses suffering millions of dollars in losses from destroyed property and shoppers who stayed away, according to media reports.

Portland protesters broke into the building of the local Police Association headquarters, setting it on fire late Saturday night, according to police.

​The fire was put out a short time later, according to a police statement on Twitter.

Officers were able to put out the fire inside the PPA office and have restored order in the neighborhood there.

Police have declared the gathering a riot and begun working to clear the downtown area.

© REUTERS / NATHAN HOWARD
US Attorney Calls for DHS Probe Into 'Unmarked' Federal Agents Arresting Protesters in Portland
Portland has been dealing with ongoing anti-police brutality and anti-racism protests and riots since the 25 May death of African American George Floyd while in the custody of white police officers in Minneapolis.

On Friday, Portland Mayor Ted Wheeler called on US President Donald Trump to remove federal troops deployed to the city by the White House to quell ongoing protests, as the agents have reportedly used heavy-handed tactics against protesters, reporters, and legal observers, with some refusing to identify themselves and wearing no identification.