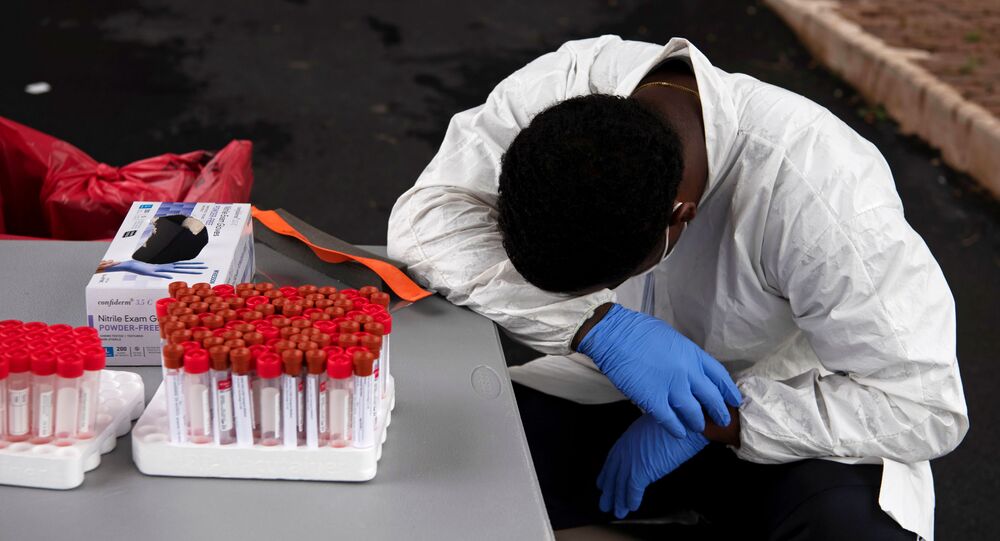 The United States on Tuesday reported 64,417 cases of COVID-19, setting another new record for cases reported in a single day.

The latest data by Johns Hopkins University shows that the US has averaged about 62,210 new cases every day over the last week, which is triple the daily average just one month ago, according to a CNBC analysis. Almost 32,000 of the new cases on Tuesday were recorded in Texas, California and Florida.

Despite the surging number of cases, US President Donald Trump on Tuesday once again insisted that the US could have fewer COVID-19 cases if it did less testing.

“Think of this, if we didn’t do testing, instead of testing over 40 million people, if we did half the testing, we would have half the cases,” Trump said during a Tuesday news conference at the White House. “If we did another, you cut that in half, we would have, yet again, half of that. But the headlines are always testing.”

This week, two of the country’s largest diagnostic labs, Quest Diagnostics and LabCorp, said they are having trouble keeping up with increased demand for COVID-19 testing.

In a statement Monday, Quest revealed that the current turnaround time for tests is longer than usual; any tests not for “priority 1” patients - such as hospital patients or health care workers showing symptoms of COVID-19 - will take at least seven days to return results.

“We attribute this demand primarily to the rapid, continuing spread of COVID-19 infections across the nation but particularly in the South, Southwest and West regions of the country. Specific drivers of demand include pre-operative patients undergoing procedures in hospitals and surgery centers; high-risk populations, such as those receiving care in federally qualified healthcare centers, nursing homes and correctional facilities; and individuals seeking testing from community drive/walk through events with government agencies and corporations,” the statement notes.

On a positive note, American biopharmaceutical company Moderna revealed that a potential vaccine to prevent COVID-19 had resulted in a “robust” immune response in all 45 patients in its human trial.

The study’s preliminary results were published in the New England Journal of Medicine on Tuesday and showed that the vaccine triggered an immune response against the virus, with only mild side effects. The drug has become the first vaccine candidate tested in the US to publish results in a peer-reviewed journal, according to US News.