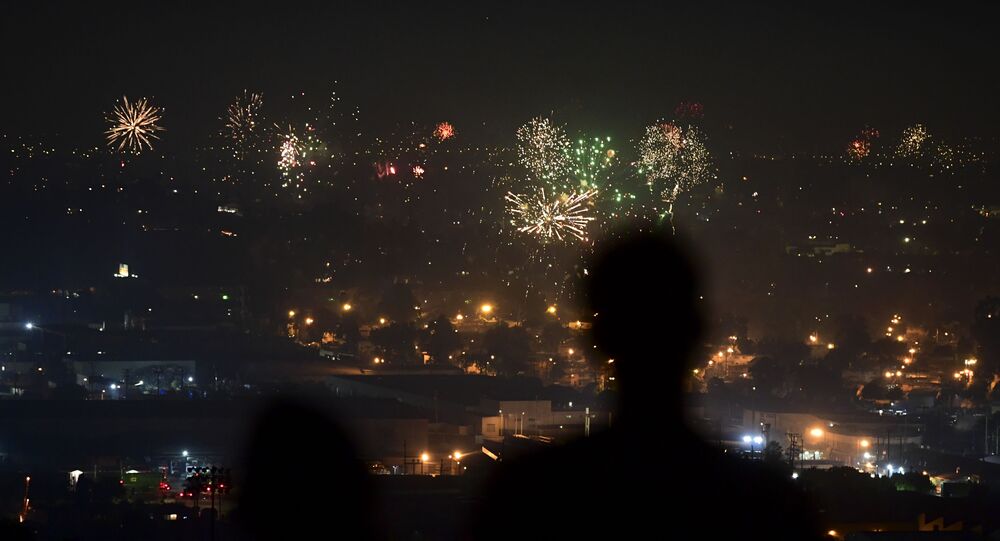 A cluster of COVID-19 cases in Cass County, Missouri, was previously linked to an Independence Day celebration, according to health officials, as people threw caution to the wind, ignoring social distancing protocols still in place in the area amid the pandemic.

New drone footage has reportedly shown a crowded Independence Day party in Missouri that has been linked by health officials to a coronavirus case cluster, reports the New York Post.

Obtained by the Kansas City Star, the video, lasting 12 seconds, is believed to show a packed gathering of young men and women dancing under multi-colored lights at a venue between between Harrisonville and Garden City near the Missouri 7 highway with no regard for the existing social distancing guidelines or requirement for face masks in large gatherings.

It has been reported that around 400 people attended the Cass County event on 3 July.

Earlier, on 10 July the Cass County Health Department announced that at least five attendees of the party had tested positive for COVID-19, although the number could be higher. As the party did not have a specified guest list, the health department released the information to the public, with those who attended the event requested to quarantine for 14 days and monitor themselves for symptoms of the respiratory disease.

One of those who helped promote the party on social media platforms, Cole Wood, told the Kansas City Star that at least 10 guests, including himself, had subsequently experienced coronavirus symptoms but were yet to be tested for the disease.

Between 28 June and 4 July there was a spike in confirmed coronavirus cases numbers spiked in the county with over 30 confirmed cases, according to the county health department website.

Amid guidelines by local officials for residents to avoid large gatherings, wear face masks and maintain social distancing, Wood acknowledged he had thought of the risks ahead of the party.

© REUTERS / Adrees Latif
An empty playground is surrounded by caution tape amid the global outbreak of the coronavirus disease (COVID-19) in Seabrook, Texas, US, July 8, 2020

However, he claimed that no one had brought up the virus risks when planning the event on social media.

While earlier in March he insisted he had taken the precautions more seriously, adhering to quarantine rules, Wood said that after none of his friends had contracted the disease he felt his lower risk age group rendered him relatively safe.

“A lot of people showed up and we didn’t really think twice about the whole virus, it won’t happen to us, you know?” Wood was cited as telling local outlet WDAF-TV.

Wood reportedly came down with a fever and cough just a few days after the party, and is to undergo a test for COVID-19 on Wednesday. He has since been quarantining at home.

Admitting that the reality of the coronavirus risk was an “eye-opener” for those who partied on Independence Day, Wood said:

“We all feel bad for causing this little outbreak that has happened… We feel like we should have been more responsible. Told people to wear masks or something. Not invited everyone.”