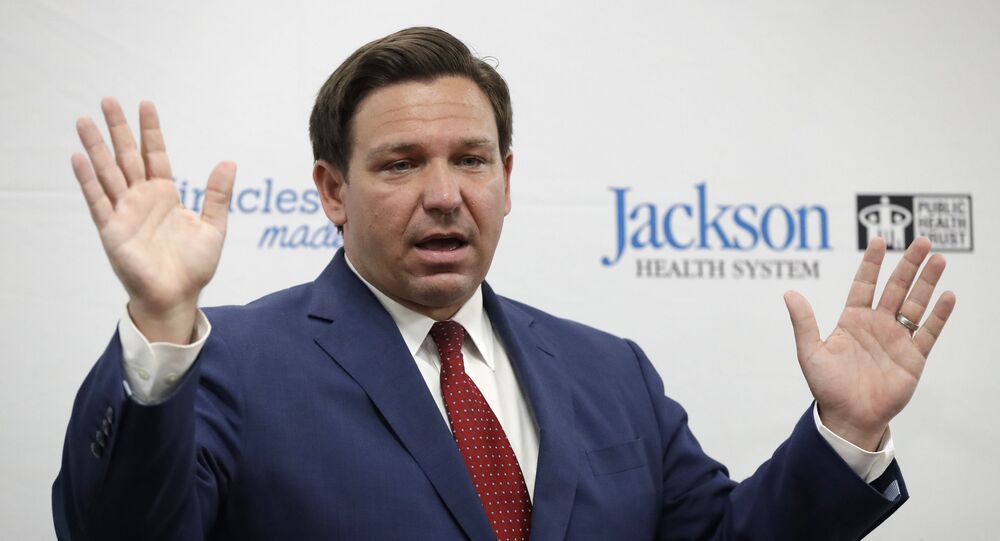 Republican Florida Governor Ron DeSantis’ Monday news conference was interrupted by a state resident who called on the official to resign and accused him of falsifying COVID-19 novel coronavirus case numbers.

During his Monday COVID-19 update alongside Miami-Dade County Mayor Carlos Giménez, DeSantis was interrupted by an individual who later identified himself as Thomas Kennedy, a Florida state coordinator for immigrant advocacy group United We Dream.

I just interrupted a press conference in Miami-Dade to let governor @RonDeSantisFL and @MayorGimenez know they are an embarrassment to FL and that their incompetence and lack of planning has resulted in the current public health crisis.

4,381 people have died so far in FL pic.twitter.com/q6SozHfT8o

"You are doing nothing. You are falsifying information, and you are misleading the public. Over 4,000 people have died, and you [referring to Giménez] are blaming the protestors," he added. "You guys have no plans, and you're doing nothing.”

According to Florida’s state health website, a total of 4,242 deaths related to the novel coronavirus have occurred in the state. In addition to an 11.25% positivity rate among tests on Saturday, 248 hospitalizations were added on Sunday to the running pandemic total, which has exceeded 18,400 hospitalizations as of Monday, according to the state’s COVID-19 dashboard. That total is cumulative, and does not reflect the number of patients currently hospitalized.

Florida logged more new cases of the novel coronavirus than all of Europe combined on Sunday, as it reported 15,300 infections - the largest single-day increase in positive COVID-19 cases in any state during the pandemic. California set the previous record last Wednesday, with 11,694 positive cases.

DeSantis came under fire in May over state transparency and the removal of Rebekah Jones, a designer of the state’s COVID-19 dashboard, from her own project. She argued that the team now running the reporting tool would not "continue the same level of accessibility and transparency that I made central to the process,” as reported by CBS Tampa Bay.

Many view the mandate as a dangerous rejection of publicly available data amid an attempt to return to normalcy.

Though younger individuals are less likely to die from COVID-19 than their older counterparts, the risk level of any one person varies, and they can still spread the contagious disease - even if they are asymptomatic.

As states such as Florida, California, Texas and South Carolina experience surges in new novel coronavirus cases and related deaths, even US President Donald Trump has taken extra personal precautions and was recently spotted wearing a mask in public for the first time - despite his initial resistance to federal advisories advocating masks.