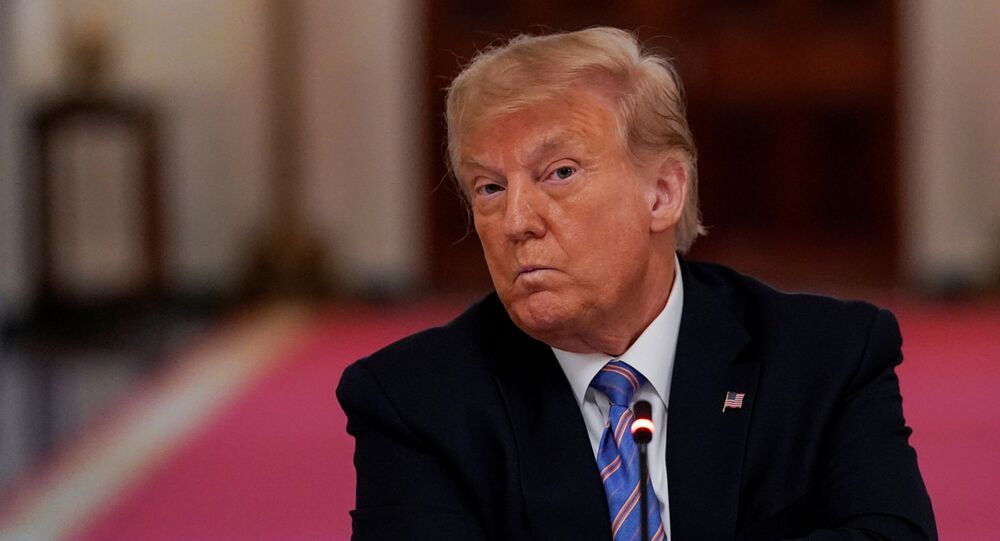 US President Donald Trump has claimed that his administration will be putting "pressure on governors and everybody else to open the schools" and ensure that people are not making "political statements."

"We're very much going to put pressure on governors and everybody else to open the schools, to get them open. It's very important," the US president said on Tuesday during his "National Dialogue on Safely Reopening America’s Schools" in the White House East Room.

"So we are going to be putting a lot of pressure on open your schools in the fall."

He claimed that some elected officials want to keep schools closed because "they think it's going to be good for them politically."

Later at the event, Trump called out Harvard University over the institution's decision to host all classes online in order to prevent the spread of COVID-19.

The US president's preemptive push for the reopening of schools in the fall comes amid the US' rapid surges of the COVID-19 novel coronavirus. "I think it's ridiculous. I think it's an easy way out," he said, before adding that university officials "ought to be ashamed of themselves."

While Trump appears to desire things to return to business as usual, public health experts such as Eric Toner, a senior scholar at the Johns Hopkins Center for Health Security, argues that the US is on track to wear masks and social distance for years to come.

“There's going to be no summertime lull with a big wave in the fall,” he said during CNET's Hacking the Apocalypse Series, as reported by Fox News. “It's clear that we are having a significant resurgence of cases in the summer, and they'll get bigger. And it'll keep going until we lock things down again.”

As of this article's publication, the US has confirmed at least 2,963,244 cases of the novel coronavirus and reported 130,902 associated deaths, according to the Johns Hopkins COVID-19 dashboard. The US Centers for Disease Control and Prevention noted on Tuesday that 46,329 new positive cases of the novel coronavirus were identified in a single day.

Nevertheless, some states are falling in line with the US president's calls for schools to reopen by the fall. Republican Florida Education Commissioner Richard Corcora issued on Monday an emergency order that will require schools, "upon reopening in August," to "open brick and mortar schools at least five days per week for all students."

This order was followed on Tuesday by Florida's recording of 7,347 new COVID-19 cases, bringing the state's novel coronavirus total to 213,794 identified cases, according to NBC Miami. Tuesday's percent positivity also reached a record-high, with 16.27% of all COVID-19 tests coming back positive.

Donald Trump Officially Withdraws the US From WHO, Senator Bob Menendez Announces